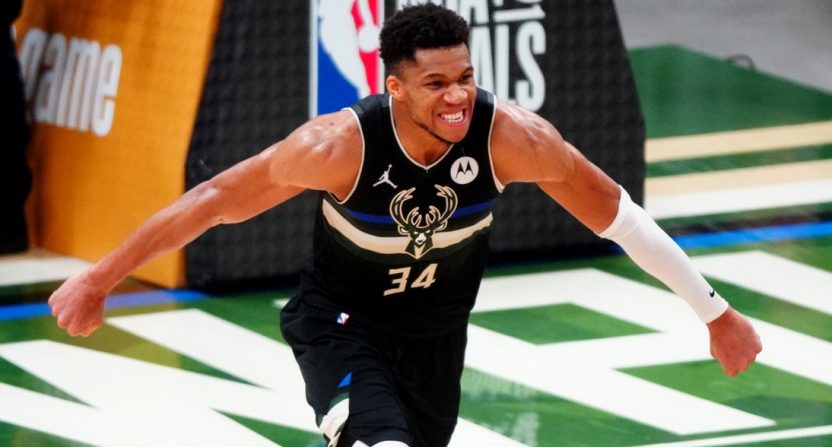 No more worries about unfulfilled expectations. No more concerns over a championship window possibly closing. No being overshadowed by basketball’s latest super-team.

The Milwaukee Bucks won the NBA championship Tuesday night, bringing a trophy to Cream City for the first time in 50 years. The victory affirms the greatness of Giannis Antetokounmpo, whose career won’t have to carry the footnote of being a superstar player who couldn’t win a title. And remember, there was very real concern that a knee injury might prevent him from playing in the NBA Finals.

If any doubt lingered as to Giannis’s place atop the sport, his status as the best player in the NBA, this championship run dismissed all uncertainty. With a championship in reach and the opportunity to win in front of the home fans (65,000 of which were outside Fiserv Forum, eager to celebrate), he was not throwing away his shot.

Giannis Antetokounmpo is the 6th player in NBA history to score 40+ points 3 times in a single #NBAFinals series! pic.twitter.com/IjoeavQleF

Giannis was ferocious going to the basket, pushing through and dunking over the Suns’ Deandre Ayton and Jae Crowder. He wasn’t settling for jump shots this time. During the regular season and earlier in the NBA Playoffs, Giannis tried to show an all-around game by shooting three-pointers.

Eventually, he realized opposing defenses were grateful for that. When Giannis had to win, he asserted himself, demonstrating that no one could stop him.

He scored 50 points, nearly half of the Bucks’ 105 total in Game 6. The only others to score that many points in an NBA Finals game are Michael Jordan, LeBron James, Jerry West, Elgin Baylor, Rick Barry, and Bob Pettit. Those guys are legends. Now, at 26, Giannis is one too.

A massive swing, great defense from Giannis staying with CP, doesn't foul and rejects his layup and then in transition a quick touch pass to Connaughton in the corner for the corner three. pic.twitter.com/nVqhoDDtbF

But he didn’t just impact the game with scoring. Giannis took control by handling the ball up the court, getting the Bucks into their offense, and taking the burden off guards Jrue Holiday and Khris Middleton. He often drew the defense’s attention, setting up his teammates for open threes and drives to the basket.

Compare that to Devin Booker on the Phoenix side, who often felt as if he had to score the big baskets, only to trap himself in a cluster of defenders with no escape.

Booker will surely learn that he can’t win most games by himself, even with Chris Paul alongside him in the backcourt. But the Suns’ front office and coaching staff will also have to keep building a team with other scoring threats and leaders around him. Following Milwaukee’s construction would be a good blueprint to follow.

Bucks general manager Jon Horst knew Giannis needed help beyond Middleton. Arguably the biggest trade of the offseason was acquiring Holiday from New Orleans. Yes, the price was high — very high — costing Milwaukee four first-round picks and a four-year, $135 million contract extension. But no one will complain about that now. A deal like that is made to win a championship and the Bucks got their payoff.

Fortunately for the Bucks, Holiday is also an excellent defender and may have turned this series by playing Paul and Booker hard and preventing both from making plays.

Jrue Holiday is doing it all 😤 pic.twitter.com/71sp2nW0Ei

The Bucks even tried to add one more piece, working out a deal with Sacramento for Bogdan Bogdanovic. But the NBA eventually negated that trade due to contacting Bogdanovic and his agent about a sign-and-trade transaction before free agency officially began. The failure to get Bogdanovic (a player Giannis really wanted) was even more painful when the Atlanta Hawks, an Eastern Conference rival, acquired the guard.

Not only did the Bucks lose out on adding what looked to be the final piece of a championship team, but striking out on the trade increased concerns that Giannis lost faith in Milwaukee’s front office to build a title contender and would sign elsewhere when he became a free agent.

But Giannis showed faith in the organization by signing a contract extension last December. Maybe it took the largest contract in NBA history to keep him, but it was also an indication that Giannis thought he could win in Milwaukee. He wouldn’t go to Miami. He wouldn’t team up with other superstars as Kevin Durant did in Golden State. Giannis wanted to do it his way, showing that he could be the cornerstone of an NBA champion.

Giannis' message to the Greek fans: "I want 100k fans waiting for me at the airport" – @sport24 pic.twitter.com/1LLJAbWxet

Now, that faith has paid off in the best way possible. Giannis isn’t just a (two-time) regular-season MVP. He won those honors in the Finals, as well. Coach Mike Budenholzer no longer has to worry about his job status and missed opportunities. Holiday helped the Bucks to achieve their championship goals.

The Brooklyn Nets and their superstar trio of Durant, Kyrie Irving, and James Harden have to pursue the Bucks. So do Trae Young and the Hawks. Out west, the Lakers and LeBron (along with the Suns, Clippers, Jazz, Nuggets, and Warriors) are now chasing Giannis and the Bucks.

Most everyone reading this likely wasn’t around when Lew Alcindor (before he was Kareem Abdul-Jabbar), Oscar Robertson, and Bob Dandridge won an NBA championship for Milwaukee. Many might not even realize that the Bucks have an NBA championship in their franchise history.

But championship glory is no longer a distant memory, a story told with old, grainy highlights. Giannis — along with Holiday, Middleton, Bobby Portis, Pat Connaughton, and the rest of the 2020-21 Milwaukee Bucks — are holding that golden trophy in vivid color.