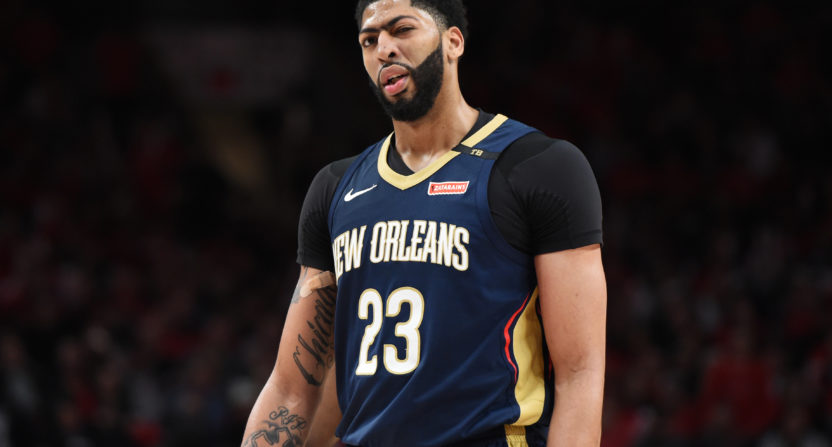 When the NBA moved from a five-game opening playoff round to a seven-game opening round, the chances for major upsets were diminished. (Not eliminated, though.)

This year, we’re unlikely to see a top seed go down in the first round in either conference. But that doesn’t mean upsets are off the table. As the staggered schedule has cycled around to the point that every series has played two games, here’s where things stand from an upset perspective.

Some teams basically have it wrapped up already.

The Rockets demolished the Wolves last night to go up 2-0, and as they’ve been pretty obviously one of the best teams in the league all season, it’s almost impossible to imagine them not advancing now. If Houston does blow it, the Harden/Paul playoff narrative is going to explode, and people would finally have some real ammunition. That seems unlikely, though, because Chris Paul is doing stuff like this:

Also in this group: the Raptors, who have just basically handled the Wizards so far, and now that they’ve gotten over their opening game losing streak, it seems like they’re pretty much set for round 2. Also the Warriors, who haven’t been great without Steph but are playing a team even more depleted than themselves.

The Boston Celtics are missing two All-Stars in Kyrie Irving and Gordon Hayward (Hayward they’ve obviously been without all season), but they’re up 2-0 on the Bucks. Milwaukee just looks lost out there, very much playing like something less than the sum of their parts. But most of all, it’s just tough to imagine a Brad Stevens-coached team blowing a 2-0 lead.

The Sixers lost game 2 to the Heat, and as such they’re tied 1-1, but they’ve also been without Joel Embiid, who is reportedly coming back for game 3. If he’s healthy and effective, they should beat Miami in three out of the next five, although Erik Spoelstra is criminally underrated and Dwyane Wade is apparently feeling himself again. Still, full-strength Philadelphia was the better team all season.

Strap In For A Long Ride

As you’d expect, the 4/5 matchups in both conferences are the toughest calls so far. Utah beat Oklahoma City last night thanks to the magic of rookie Donovan Mitchell, who went off for 28 points as the Jazz outscored the Thunder 28-16 in the fourth quarter to even up the series. Hilariously, Russell Westbrook, Paul George, and Carmelo Anthony went 0-16 in that fourth quarter.

Those teams are a fascinating contrast in style, and Mitchell really could be the wild card. Salt Lake City isn’t an easy place to play, and it’s not that difficult to imagine the Thunder falling down 3-1 there over the weekend in a hail of Westbrook bricks. Or, you know, Westbrook and Paul George could play like the two best players in the series and go up 3-1. Most likely? It’s split heading back to Oklahoma City next week.

The Pacers made headlines when they just flat beat the Cavs in game 1 on Sunday. LeBron came out ready to change that last night, opening the game on a personal 13-0 run (it was 16-1 at one point), with the Cavs seemingly cruising to the kind of victory that would make Sunday’s opening game feel like a fluke. They led 24-6 at one point, and took a 33-18 lead after the first quarter.

Indiana outscored Cleveland every quarter after that, though, which led to a very tight game despite an all-world performance from LeBron, who finished with 46 points, 12 rebounds, and 5 assists. And yet the Pacers came back, to the point that Victor Oladipo had a wide-open look to tie the game in the final minute. That’s astounding, all things considered, but it’s tough to say whether it should be looked at as a positive that Indiana hung around, or a negative that they sort of kicked away a winnable game.

Either way, it’s clearly an interesting series, as the Cavs are essentially a one-man team right now. Game 3 is going to be crucial, and it’s almost a must-win for Indiana. If they lose that at home, it’s tough to imagine beating a LeBron team in 3 out of 4 playoff games. But if they win? That would mean they’ve been in many ways the better team for three straight games, and it would mean Cleveland is in real and immediate trouble.

Okay, This One’s Probably An Upset

New Orleans is up 2-0 and heading back home, and the Blazers don’t have much to say about that. For as good as Dame Lillard is, the Pelicans pretty clearly have the best player in the series in Anthony Davis, and having already lost two games at home, things look pretty bleak for Portland. It’s not impossible they come back, but the Pelicans are really good.

How they’ve managed to improve after losing DeMarcus Cousins in the middle of a career year is endlessly fascinating, and it looks like they’re in line for a crack at the Warriors in round 2.