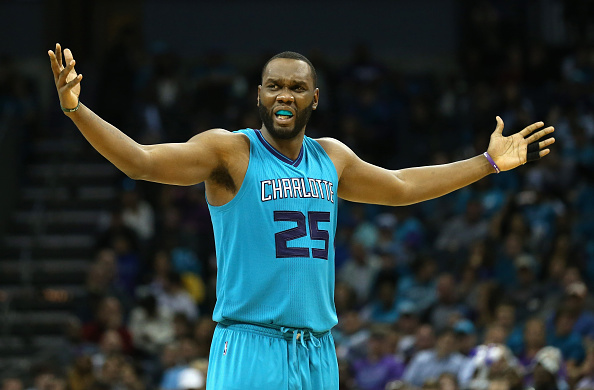 Charlotte Hornets center Al Jefferson has been suspended five games by the NBA, for violating the terms of the league’s anti-drug program.

Jefferson is currently dealing with a calf injury that has kept him out of action over the last week, and could keep him out for multiple more weeks. The suspension won’t kick in until Jefferson’s “eligible and physically able to play”, so it may be a month until he can play in a game.

The Hornets and Jefferson released statements in response to the suspension:

Hornets’ statement: “We are disappointed in Al’s decisions that led to this suspension. As an organization, we do not condone this behavior. We have addressed this with Al. He is regretful and understands that we expect him to learn from this mistake.”

Jefferson’s statement: “I want to apologize to the Hornets organization, our owner, my teammates and my coaches for the poor decision that I made. I know I have let people down, especially the Hornets fans that have been so supportive of me since I arrived in Charlotte two years ago. I am blessed to be able to play the game that I love for a living and I do not take that for granted. From the bottom of my heart, I am truly sorry, and I am committed to making smarter decisions in the future.”

While we don’t know for sure, the easy assumption is that Jefferson’s violation was for marijuana use, as Ball Don’t Lie’s Kelly Dwyer explains:

If you’re reading an NBA blog on a Wednesday afternoon about a Charlotte Hornets center, you likely know that there is exactly one drug-based five-game suspension, and that is for testing positive for marijuana three times. The NBA and NBPA, whether this is by design or unintentional, leaves little guesswork for those on the outside.

Al Jefferson, a tall man with ankle and calf issues that runs up and down the court quite a bit prior to battling in the paint with the league’s biggest players, was “caught” smoking marijuana three times per the league’s (at first) random testing policy. Jefferson, who tore his ACL in 2008, probably should have taken more caution once the first positive test allowed the NBA (per the league’s collective bargaining agreement) to schedule further tests, is right when he says he needs to make “smarter decisions in the future.”

Jefferson, 30, is averaging 13.7 points and 6.4 rebounds for the Hornets on the season, and is the team’s most consistent inside presence. The 11-year veteran has averaged near a double-double for his career, at 16.9 points and 9.0 rebounds per game.

The Hornets are currently in the 5th position in the East so the timing is not ideal considering the team is off to a good start and that they’ve only made the playoffs twice in the eleven years the franchise has been in Charlotte and has yet to make it past the opening round.