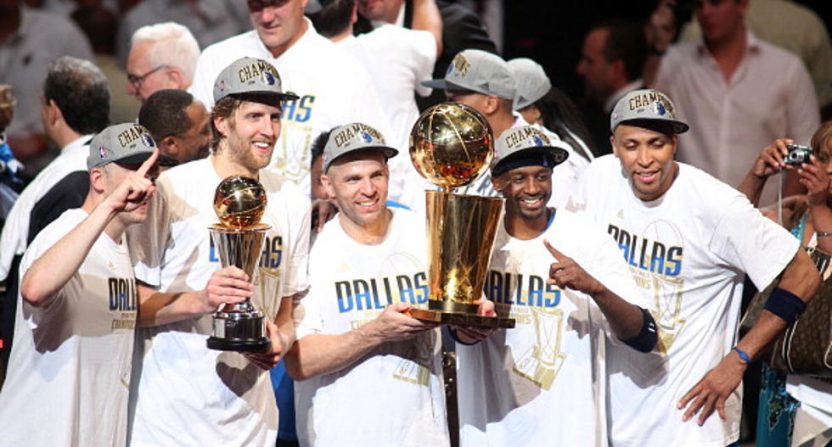 It was a coronation and validation of one of the greatest players. Just not the one we all expected. Dirk Nowitzki and the 2010-11 NBA champion Dallas Mavericks are among the most unlikely champions over the last two decades. Ten years later, it remains an amazing feat.

The 2010-11 season was supposed to be all about Miami, which signed both LeBron and Bosh as free agents over the summer to join Wade. A seismic shift in the balance of power. This union of rock star talent was not only unprecedented, but was also celebrated by Miami before the season even started. When it came to championship expectations, LeBron promised “not one, not two, not three, not four, not five, not six, not seven …”

Silly. Boastful. Unwise. That arrogance made Miami the most despised team in the league. However, at the time, it didn’t seem like crazy talk. The question wasn’t “Will Miami win a championship?” But rather, “How dominant will Miami be?” The preseason under/over win total was an absurd 64.5. The Heat looked like a legit threat to challenge Michael Jordan’s 1995-96 Chicago Bulls team that went an NBA record 72-10.

Meanwhile, the Mavericks were an afterthought. They weren’t even favored to win their division. The San Antonio Spurs were considered better. And all the attention out West was focused on the Lakers’ drive for a three-peat.

Dallas had one true superstar. Nowitzki was a unicorn before that word became part of the sports lexicon. The most skilled offensive seven-footer the NBA had even seen. Nowitzki had the shooting range of a smaller wing player and complemented that with an unusual one-legged fadeaway that was almost unstoppable.

Nowitzki powered the Mavericks to the 2006 NBA Finals, where they seemed poised to win a championship after going up 2-0 on the Shaquille O’Neal and Dwyane Wade-led Miami Heat. But they lost the next four games. The following season, Dallas (67-15) was even better with Nowitzki winning the MVP. But the Mavericks suffered a humiliating 4-2 first-round loss to the Golden State Warriors, who were guided by former Dallas coach Don Nelson.

By the time the 2010-11 season rolled around, it looked like Nowitzki’s championship window was closed. In the NBA, you usually need at least two Hall of Fame-caliber players in their primes to compete for a title. The Mavericks didn’t have that.

True, Jason Kidd was a future Hall of Famer, but he was 37 and in the final years of his career. There were also former All-Stars like Shawn Marion, Caron Butler, and Peja Stojaković. Good, but not the players they used to be.

Even the coach left you wondering. Rick Carlisle had enjoyed plenty of regular-season success, but had also been fired at his previous two stops: Detroit and Indiana. He was in his third season with Dallas, and the pressure was on after the Mavericks lost in the first-round of the 2010 playoffs as a No. 2 seed to archival San Antonio.

There was no reason to believe that Dallas would do anything special. We were all waiting for the Heat (LeBron!)-Lakers (Kobe!) NBA Finals.

It’s funny. The NBA is usually so predictable that when things don’t go according to script, it can be jarring. Dallas (57-25) had a good regular season, surviving a knee injury to Butler. Still, the Mavericks finished second in the Southwest behind San Antonio (61-21).

When the playoffs started, it was chaos in the West. The top two seeds never made it to the conference finals. The Spurs were upset in first round by Memphis. More shocking: Dallas swept the Lakers 4-0. The Mavericks closed it out with a 122-86 mauling, as they tied an NBA playoff record with 20 three-point baskets, including nine from Jason Terry.

It marked the first time legendary coach Phil Jackson had ever been swept in the playoffs. It also turned out to be the end of the Kobe Lakers, who were never serious title threats again.

In the Western Conference Finals, Dallas dispatched the Oklahoma City Thunder in five games, highlighted by a 15-point fourth-quarter comeback to win Game 4 in overtime. Nowitzki was back in the NBA Finals.

Like Dallas, Miami also reached the Finals without facing an elimination game. After a slightly disappointing regular season (58-24), the Heat won their three playoff series each in five games, beating the Philadelphia 76ers, Boston Celtics, and Chicago Bulls. Understandably, Miami was a huge favorite to win it all. The Heat’s second-leading scorer was Wade (25.5). Dallas’ was Terry, a guy who had never made an All-Star team.

When Miami won Game 1 and was up 88-73 at home with 7:15 remaining in Game 2, most expected a quick end to the series. But the Maverick rallied again to stun the Heat 95-93, capped by Nowitzki’s game-winning lay-up with 3.6 seconds left.

Miami rebounded to win Game 3, but that turned out to be it for the Heat. Dallas won the next three, highlighted by Nowitzki overcoming a fever in Game 4 to gut out an 86-83 victory. In Game 5, Dallas won 112-103 behind hot shooting (13-of-19 from three-point range) and 29 points from Nowitzki. Perhaps he drew additional motivation from LeBron and Wade mocking him by fake coughing.

Dallas closed out its championship run with a 105-95 Game 6 victory in Miami. The lasting image was that of an emotional Nowitzki leaving the court before the game was over. After all the disappointments, he finally was a champion and Finals MVP.

Kobe Bryant dominated the 2000s. LeBron James has dominated since the 2010s. But for one magical postseason, Dirk Nowitzki was better than both.