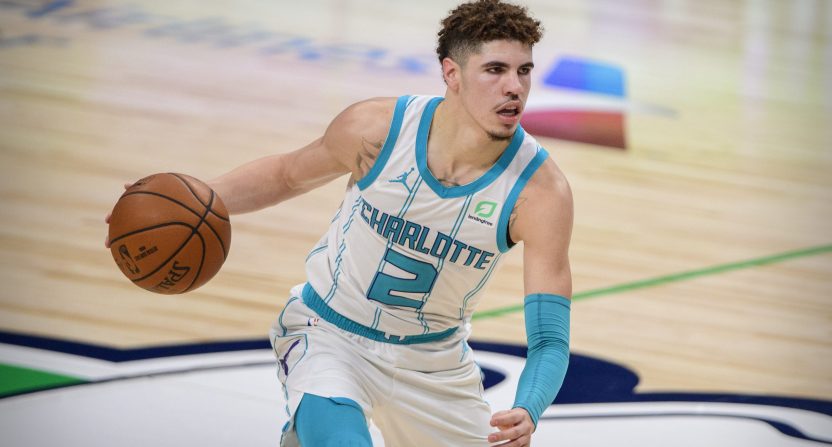 The 2020-21 NBA season has already seen some weird results. The New York Knicks beat the full-strength Milwaukee Bucks, the Cleveland Cavaliers beat the Philadelphia 76ers (without Joel Embiid), and multiple projected contenders have lost some games. Even still, the net rating leaderboard provides fewer surprises — the Bucks are at the top, followed by the Los Angeles Lakers.

It’s an unusual time to be playing basketball, and the varying lengths of offseasons were bound to create some blowouts and upsets. But overall, nothing has been too out of the ordinary.

We’re looking at the progress of some rebuilding teams today. In the case of a few, it’s been an extremely promising start, while others have muddled along with less hope. It’s early, but let’s check in on what’s happening with the Cavaliers, Charlotte Hornets, and New York Knicks, each of whom have generated some buzz this season:

The Cavs spent last season falling apart on defense, but under J.B. Bickerstaff, they have made a major turnaround. They’re giving up just 102.8 points per 100 possessions, good for second in the NBA, and sit at 4-3. Despite a series of injuries (Kevin Love, Kevin Porter Jr., and rookie Isaac Okoro are out, plus Darius Garland missed a recent loss to the Orlando Magic), Cleveland has somehow managed to concede fewer than 100 points in almost every game this season.

The clearest explainer for this revival is turnovers. They lead the league in turnover rate, with Larry Nance Jr. and Andre Drummond racking up steals. They stay in passing lanes and get back in transition, forcing teams to settle in the half-court. With no Love, they’re bigger and more mobile on defense, and the small guards (Colin Sexton and Garland, aka Sexland) have made clear strides. They fight.

Nance is one of the most underrated players in the league. His ability to force turnovers on defense and provide quality rim protection from the power forward position has helped lead Cleveland’s defensive turnaround. Alongside either Andre Drummond or Javale McGee, two traditional centers who rebound and affect shots at the rim, Nance corrals pick-and-rolls with stout help defense while also keeping pace with stretch fours.

Trae Young and the explosive Atlanta Hawks offense had trouble with the Cavs’ defenders in a 96-91 Cleveland win last Saturday. Watch how Nance upends this Young-John Collins pick-and-roll, which had been scorching teams:

With McGee guarding Clint Capela in the dunker spot and Dante Exum lingering off of DeAndre Hunter, Nance hounds Young higher up the court with trust that Collins won’t be wide open. He forces Young into a difficult floater, then has the hops to immediately contest for the rebound and the anticipation to poke away Young’s attempted dish to Collins.

The Cavs are much less vulnerable on the perimeter, too. Exum, pressed into the starting small forward job due to injuries, has shown his quality as a defender, though he himself suffered a non-contact injury against the Magic. Sexton and Garland hound guards at the top of the key, switching and helping keep rotations moving:

Garland’s speed gives him the ability to prevent a Cam Reddish drive and then get all the way back to Young without conceding anything. The rotations under the basket show how valuable Cleveland’s size is, too, as Nance boxes out Capela while Drummond tips (or at least affects) Young’s floater.

It would be asking a lot to expect Cleveland to defend this well all season. They don’t have any elite defenders on their team, and there are signs that luck has been in their favor — as The Athletic’s John Hollinger noted, opponents have missed a ton of free throws against them. Their weaker defenders, particularly Love, will return from injury at some point and hurt the operation. But opponents haven’t been unlucky from three (the same cannot be said for the Knicks), so unsustainable shot variance isn’t a major factor. The Cavs have reason to be hopeful.

The biggest story in Charlotte is LaMelo Ball. As expected, he has had plenty of bumps in the road, and goes stretches where he’s a negative for the Hornets. But despite the terrible defense and occasional franticness, he has shown significant promise as a ball-handler and shooter.

Playing as the Hornets’ sixth man, he’s been able to average 12 points through seven games, with a handful of assists to go with the scoring. His most-hyped asset entering the NBA was his passing, and we’ve seen some glorious flashes:

These reads on the pick-and-roll are gradually coming for him. He has great natural instincts and the willingness to throw passes at all sorts of angles, but it takes time to learn how NBA defenses react and discern which passes are open. In the above clip, he wastes no time lofting the ball to Miles Bridges, avoiding the help defense of Joel Embiid. That’s great anticipation, and great location on the pass.

Ball is one of those players who you encourage to grab those easy uncontested rebounds so he can start the break and throw outlet passes. He’ll get more accurate as the season goes on, but he knows how to find the tough passes down the court:

With the Hornets, he has a reasonable system around him and room to grow. Charlotte isn’t exactly the 2017 Warriors offensively, but they have shooting and athleticism, giving Ball perimeter spacing and lob threats. Once Devonte Graham finds his shot after a rough start, in addition to stabilizing the streakiness of Terry Rozier and Gordon Hayward, the Hornets should move out of the bottom third on offense.

Ball’s shooting (42 percent on four attempts per game!) will certainly help. He’s been able to hold off on attempting too many deep off-the-dribble threes, instead converting on catch-and-shoot looks. Charlotte has the shot creation to generate those, as long as Graham and Rozier remember to look for them.

The Hornets are 2-5, but those two wins came against the full-strength Nets and Mavericks. It will take time, but there’s a nice little core brewing in Charlotte.

The Knicks are red-hot! They’ve beaten the Indiana Pacers and Atlanta Hawks in recent days, and have won four of their last five games. A lot of credit goes to Tom Thibodeau for helping turn the disjointed roster into something more capable, particularly on defense.

Their best player has been Julius Randle, who’s played at an All-Star level so far. He’s making some outside shots, running in transition, and putting up around a triple-double every game. Randle has always had the physical tools, but it’s striking how in control he looks with the ball. No longer is he rushing into tough shots or missing passes. He’s been an exceptional creator for a team finding buckets through incisive cutting.

RJ Barrett has improved, which is surely a product of playing in a more functional environment. Thibodeau has the team looking capable of internal development, something that should help first-round draft pick Obi Toppin, who’s been out with a calf injury.

Through Monday, the Knicks are 24th in offense, which was expected. They don’t have the outside shooting to get much better in that area. Defensively, though, Thibodeau has them tied for ninth. With Mitchell Robinson in the paint, the Knicks have been stingy defending the rim. They’ve had some shooting luck (opponents are hitting just 29 percent of their above-the-break threes against the Knicks, which will likely go up over time), but for now, they’re doing enough to hold off good teams.

The playoffs are still a longshot. Regardless, they’re fun to watch, and their top players have made significant strides forward. Randle is on track to make an All-Star team. Thibodeau has the Knicks looking like a team to keep an eye on.