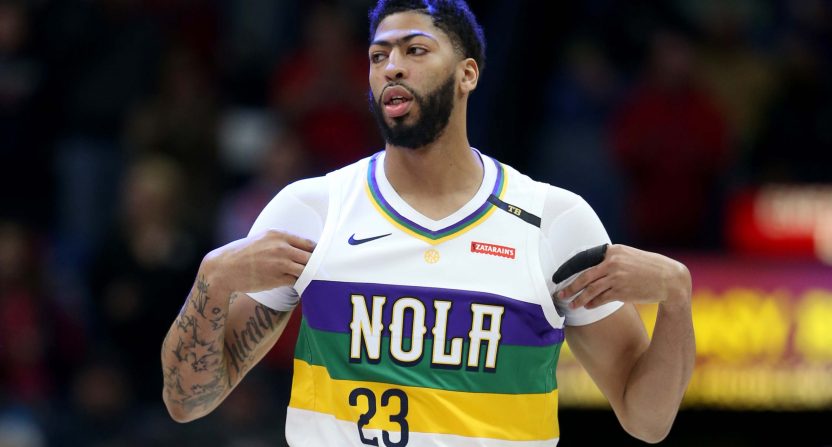 Anthony Davis was the talk of the NBA world over the last week, after he requested a trade from the New Orleans Pelicans. Well, the NBA trade deadline passed, and despite constant rumors about him potentially being dealt (particularly to the Los Angeles Lakers), Davis remained a member of the Pelicans.

Naturally, this created an awkward situation for Davis and the Pelicans, but New Orleans decided they would play Davis for the rest of the season (with some pressure from the NBA — threatening $100,000 fines — surely a big reason).

Well, Friday night Davis indeed returned to the Pelicans’ lineup, and the home crowd at the Smoothie King Center wasn’t very happy with the superstar during intros.

The boos quickly turned into cheers when Davis threw down a dunk for the Pelicans’ first score of the game:

Anthony Davis booed on his first touch and cheered for his first score in New Orleans. pic.twitter.com/QJwgrWpMZT

That was the beginning of a monster performance for The Brow. Davis scored a game-high 32 points (11-of-15 from the field), pulled down nine rebounds, and had three blocks in a 122-117 New Orleans win.

Oh, and Davis did that all in just 25 minutes. He didn’t even play the fourth quarter, making an awkward situation just a bit more awkward when he’d been dominating.

It's the first time in his career he scored 30+ points while playing 25 minutes or fewer.

The elephant in the room with the Pelicans and Anthony Davis has now grown into a woolly mammoth as he sits in the fourth quarter of a close game.

“My teammates came to me and said they wanted me to play. I just love being back on the floor …”

—Anthony Davis after returning to the court for the first time since demanding a trade pic.twitter.com/dGusx0d4PZ

So, this will be a very interesting — and highly awkward — situation for the rest of the season.