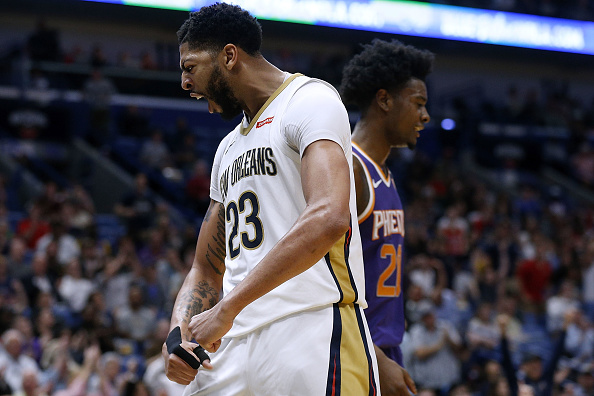 When DeMarcus Cousins ruptured his Achilles in late January, it looked like it would sink the New Orleans Pelicans’ playoff hopes.

The center had earned All-Star honors this season while scoring 25.2 points per game, and collecting 12.9 rebounds per game. Even with fellow all-star Anthony Davis remaining in the Pels’ frontcourt, that sort of production is not easy for any team to replace.

And yet, Davis has tried his best to do so over the past 12 games, leading the Pelicans to an 7-5 record — including six straight wins now. He’s averaged 33.9 points per game in Boogie’s absence, with 13.2 boards (both far beyond his season averages). However, the recent three-game stretch since getting back from the All-Star break has been incredible.

The highlight was Monday night, when Davis accomplished something just one other player has ever done. He matched Hall-of-Famer Bob McAdoo as the only players in league history to score 50 points or more, collect 15 rebounds or more and block five or more shots in a single game. Davis had 53, 18 and five, respectively, while hitting 21-of-26 free throws in a 125-116 victory over the Phoenix Suns.

It was the second time in three games where Davis scored 40 or more with 15 or more rebounds and five blocks. He had 45, 17 and five in Friday’s victory over the Miami Heat as well. Those two games sandwich a “ho-hum” 27-point, 13-rebound performance while beating (likely) playoff-bound Milwaukee on the road.

Davis is on an absolute tear of late, and as a result, so is New Orleans’ offense. Since the start of the win streak, they’ve fallen short of 120 points just once (118 vs. Detroit). And since Cousins went down, they’ve scored less than 103 points just once (82 in a loss to the 76ers where Davis played just 28 minutes).

In that stretch of 12 games, only Houston’s James Harden has a higher Player Impact Estimate rating than Davis’s 20.4, according to the NBA. No other New Orleans player has a rating higher than 13.2 (Jrue Holliday).

But most importantly, the Pels are now 34-26 on the year, and tied with Portland and Oklahoma City as the five-seed in the West. While they’re just a game out of eighth place and two games out of ninth, they’re also just two games behind the Jimmy Butler-less Timberwolves for the No. 3 seed.

When you look at the current Western Conference standings, just two of the top 11 teams — San Antonio and Oklahoma City — don’t have winning records over the last 10. Seven of those 11 have won seven or more games in the last 10, led by the Rockets, who are 10-0 and in the middle of a 13-game winning streak. Keeping pace is the name of the game for any team in the West right now. Despite losing an all-star in Cousins, you’re seeing New Orleans stay in contention on the efforts of Davis, who would be seen as an MVP frontrunner in most seasons if not for Harden.

So while we know what Davis has been able to do through 12 games without Cousins, the focus will now switch to what he can do over the final 22, and if the workload catches up at some point. There’s also a case to be made that Davis’s current stretch, while historic, has also been full of close calls against the dregs of the lower half of the NBA. In the last six wins, just one of those teams (Milwaukee) is currently sitting in a playoff spot.

Lucky for the Pelicans, that streak sort of continues in the short term. After a road date at San Antonio on Wednesday, four of the next five are also against non-playoff teams. Starting March 15, however, the real work begins. The Pels face the Spurs, Rockets and Celtics, back-to-back-to-back. At the end of March, they have a four-game stretch against Houston, Portland, Cleveland and Oklahoma City.

Looking at the slate that way, this recent stretch was essential for New Orleans to stay in the race, and this upcoming short stretch will be too. They’ll get at least one shot at the Spurs before Kawhi Leonard returns (no indication as to when that will be yet), but just nine of 22 against non-playoff teams.

Will something between 40 and 45 wins be enough to make the playoffs in 2018? Perhaps, though there will be a small margin for error. Davis is the key to them continuing this recent rate of play, but it seems like a tall order to expect him to sustain the recent rate of production. Scoring 33.9 points per game is difficult for a month straight, never mind what would be a 34-game string to end the year. But if they’re going to make the postseason, Davis may have to do something close to that.