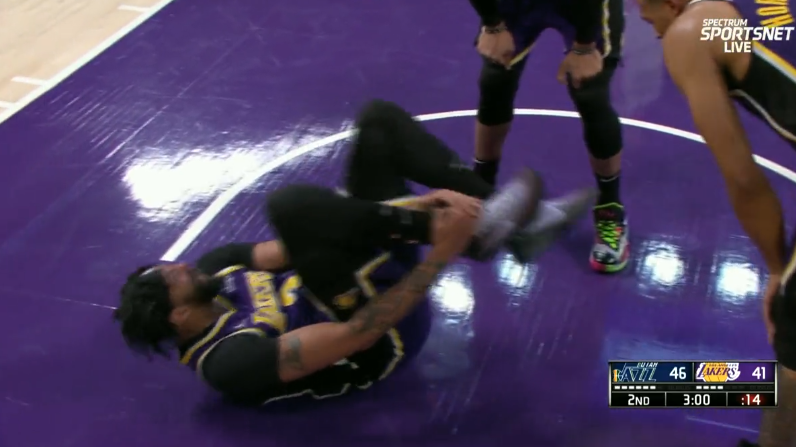 The Los Angeles Lakers could use all the help they can get as they fight to stay in the range of the NBA Playoffs. However, they’re not going to get much help from Anthony Davis for the next four weeks as he heals a mid-foot sprain suffered on Wednesday.

Anthony Davis has a mid-foot sprain and will be evaluated again in four weeks, team says.

Davis was injured when he lept in the air to catch a pass, coming down on Rudy Gobert’s heel during the second quarter of LA’s game against the Utah Jazz. Davis’s ankle turned outward and he clutched his leg after falling to the floor. He was helped off the floor and needed crutches to leave the arena afterward.

Anthony Davis goes down grabbing his right ankle. He was helped off the court and headed straight to the locker room. pic.twitter.com/c60eXALIIl

The good news after the game was that x-rays on the ankle were negative. However, everyone knew that it didn’t mean Davis and the Lakers were out of the woods just yet.

It’s an especially tough break for Davis, who missed 17 games in December and January with a sprained MCL. Unfortunately, the eight-time All-Star has developed a reputation, rightly or wrong, of being injury-prone. And this certainly isn’t helping in that regard when it comes to reactions from the NBA world.

The man is made of glass https://t.co/Veeg8EJcqb

Anthony Davis is made of glass and will be evaluated every night of his career https://t.co/C6jFGUiBOJ

Anthony Davis will miss at least the next four weeks with a mid-foot sprain, the Lakers say. Obviously, a real problem for the team as they are on the edges of the postseason

Anthony Davis Injuries this past year

It’s been a rough year for AD

The Lakers are currently ninth in the Western Conference with a 27-31 record, six games back of the play-in tournament, which they’d love to avoid. For the time being, they have a small buffer in that they’re four games ahead of the New Orleans Pelicans to ensure a spot in the play-in tournament.

According to the reported timeline, Davis will be reevaluated on or around March 18, which means the Lakers will have to keep it together for 11 games until at least then.