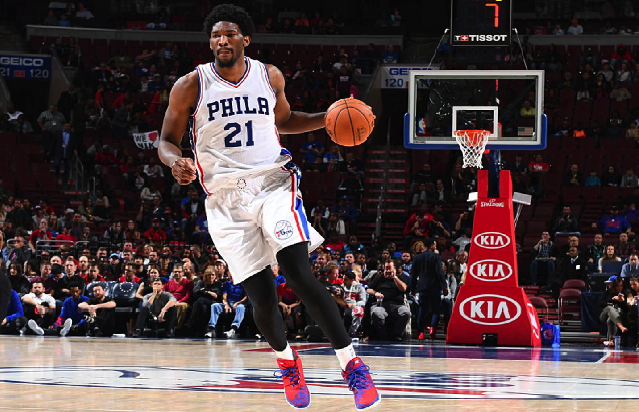 The NBA game is changing. Actually, forget that. The game has changed. Pace-and-space is in. Everyone (other than a certain monk-life figure reigning over things in New York) wants to get up and down the floor and shoot lots of threes and play from the outside-in.

The age of the plodding seven-footers and dumping the ball into a monster on the low block are no more.

So maybe it should come as no surprise that the big guys are finally catching up, that a new group of beasts with skillsets never before seen have entered the league. It’s basic Darwinism. Evolve or be phased out.

But… good God, have they evolved. Just look at what took place across the league Wednesday night. Down in Memphis, Karl-Anthony Towns — still just 20, by the way — dropped 21 points on the Grizzlies and repeatedly made Marc Gasol — forgive me, former Defensive Player of the Year Marc Gasol — look as if he was playing blindfolded.

Oh, did you not see that clip? Perhaps that’s because 400 miles to the south, Anthony Davis put together one of the most marvelous box scores in the history of basketball: 50 points, 16 rebounds, seven steals, five assists and four blocks. He followed that up with a 45-point, 17-rebounds performance against the Warriors.

Anthony Davis vs. The Defense https://t.co/Vn8DED0ujq

And don’t blame Davis for the Pelicans’ 0-3 start to the season. Can you name a single other starter on the team? New Orleans is starting someone named Tim Frazier at point guard. It’s actually impressive how poor a job general manager Dell Demps has done.

It's awesome to see @JoelEmbiid healthy and making plays. Can't wait to watch his development. https://t.co/2ol32ErfWA

Of course, let’s not forget about the 7-foot-3 freak dubbed a “unicorn” by Kevin Durant last season. Anthony Davis, Karl-Anthony Towns, Kristaps Porzingis leading NBA’s new era of big men might have as much ability as any of the other players mentioned above.

He can shoot from deep. He already looks stronger putting the ball on the floor.

The and-1 dunk was cool but I loved this Porzingis power dribble even more. Last year he'd try to lay that … https://t.co/0k3JtuCVmw

Porzingis already one of the better shot-blockers in the league and is learning how to defend quicker players out on the perimeter — a skill he’ll need now that he’s playing alongside another center, Joakim Noah.

Towns, Porzingis and Davis, and Embiid in a way, along with whatever mutants come next, are basketball cheat codes. Their presence on the court allows their respective teams to solve any puzzle they come across.

Think of it like this: Over the past two years, Draymond Green has become a star not just because of his diverse and special talents, but also because of what those talents allow the Warriors to do. He can defend big men and guards, Golden State can stifle opposing pick-and-rolls by switching and because he can play center, the Warriors can then toss out a lineup full of outside shooters, which leaves the floor wide open to attack.

Green is fantastic, but imagine if a team could play a lineup full of shooters but also with a seven-foot center to help protect the paint. Imagine how much better the Warriors’ would be if Green was 7-foot-2 and had a post game.

Well, those are the very players that we’re now seeing enter the NBA.

The ideal center for today’s league has three qualities: The ability to protect the rim on defense, the ability to space the floor on offense, and the ability to punish smaller defenders so that teams can’t put guards on them.

If you have that, then putting together the rest of the team is easy. Of course, it’s not easy to find players that possess all those traits. Over the next half-decade, we’re going to see these type of big men morph into the ultimate commodities, and also — and perhaps more importantly — major players on the playoff stage.

This is how things go in any industry. One team changes everything — which the Warriors have done over the past two years —and the onus then falls on the rest of the competition to adjust.

Those adjustments have arrived. They come in the form of long-limbed, fleet-footed behemoths, and they’re primed to take over the NBA.