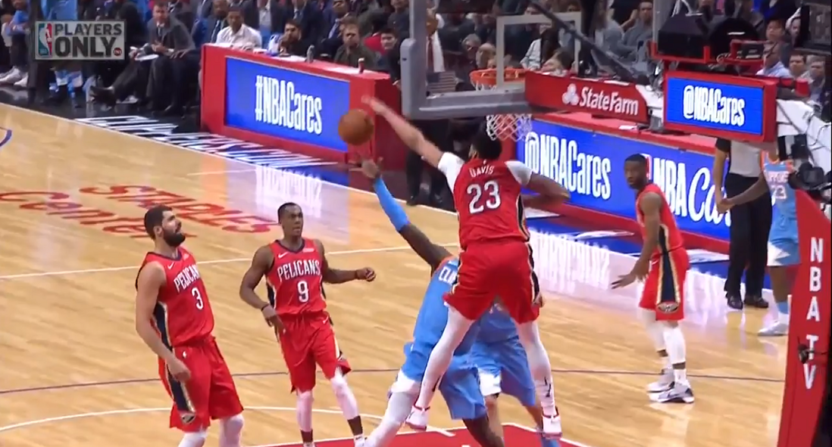 When DeMarcus Cousins went down for the season with a ruptured Achilles tendon on January 26th, it looked like the end for the New Orleans Pelicans. At that point, the Pelicans were 27-21 and sixth in the West. It seemed like an effective end to their year, or at least their ability to worry anyone down the stretch and into the postseason.

Since Cousins was injured, though, the Pelicans have gone 10-5, moving to 37-26 and into the fourth seed. That’s astounding, and while they’ve gotten contributions from plenty of players, it’s pretty clearly been The Anthony Davis Show. In February, Davis averaged 35 points, 13 rebounds, 2.5 steals, and 2.2 blocks per game. That’s not bad, and his run helped the Pelicans win eight games in a row heading into Tuesday night’s contest against the Clippers in Los Angeles.

Davis went off again for the benefit of a national audience, racking up 41 points, 13 rebounds, three steals, three blocks, and two assists for good measure. It was astounding to watch and included this block, which is a nice example of how Davis can occasionally appear to be 13 feet tall with arms that reach the moon and can also fly:

He’s far from simply a defensive wonder, though, and the Pelicans needed his entire skill set Tuesday. The Clippers trailed by 15 heading into the fourth quarter, but with two minutes remaining and the Pelicans having scored just two points over the prior three minutes, the Clippers held a 113-109 lead. That’s when Davis went to work.

That’s a center, folks, putting a head fake on Tobias Harris and attacking the rim like he was playing NBA Live 2005 on easy mode. His finish so easily eluded the Clippers defenders that he looks like a five-star prospect in a YouTube mixtape taking on a clearly overmatched AAU team.

The Clippers made him work a bit more on the next possession. Having gotten the switch he wanted, Davis sealed Austin Rivers deep in the post, but the double came immediately. Davis makes the skip pass out, and then demands the ball again:

It’s hard to express how difficult that bank shot is. Davis is essentially jumping laterally across the lane. Watch his feet when he takes off; he comes down across the paint, having twisted to keep himself square throughout the shot. That tied the game back up, but Davis wasn’t finished:

Watch his footwork there. It’s insane, a textbook and easy seal of poor Tobias Harris despite Harris, who bit on the pump fake at the start of this personal 6-0 run from Davis. From there, Davis gives Harris a dream shake before hitting the pure rainbow turnaround over his right shoulder. He was literally unstoppable, scoring in a variety of distinct ways when his team needed it the most.

This post-Cousins run has been something to see, and New Orleans with Davis isn’t going to be a fun matchup for anyone in the playoffs.

Plus, he’s obviously not doing it alone:

can we talk about Jrue Holiday 17 points, 17 assists?

Is ANYONE going to give him some credit for how they've survived without Cousins?

IS ANYONE OUT THERE

But Davis has very much entered the “best player in the game” conversation, and he turns 25 in a few days.

So, yeah, good luck with that, rest of the West.