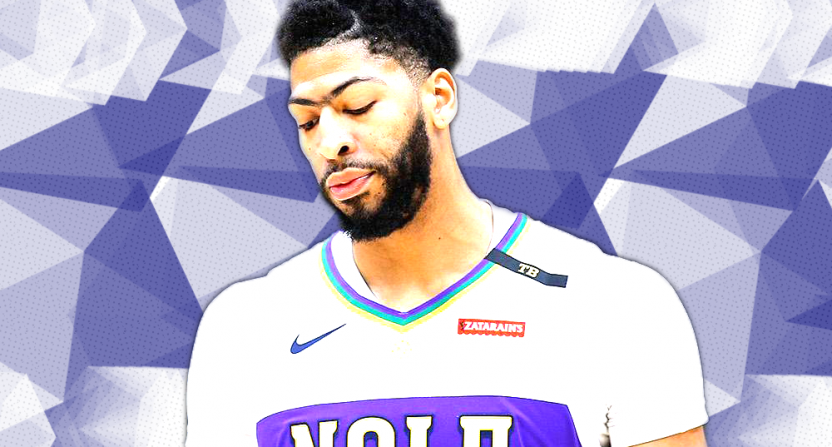 The Anthony Davis saga has taken another turn in a confusing direction.

The Pelicans star forward requested a trade out of New Orleans back in late January, with reports suggesting the 25-year-old wanting to team up with LeBron James and the LA Lakers. Davis was also open to joining the New York Knicks, LA Clippers, or Milwaukee Bucks. That list grew over time as Davis admitted – previous to contrary reports – he’d be fine getting sent to the Celtics.

So that makes 5 teams – Boston, the Clippers, the Lakers, New York and Milwaukee – on Anthony Davis' preferred list of teams to be dealt to.

Anthony Davis says he does not have a preferred destination#NBAAllStar pic.twitter.com/fyCIxtLdYX

“Whatever list that came out. That’s between my agent and the Pelicans. It’s true.”

So, which is it? Does Davis simply want out of New Orleans or is he still looking to join the Lakers?

It’s easy to figure out why Davis wants to get out of New Orleans as soon as possible. The team essentially decided to sit Davis for the rest of the season after he made his trade demand, making an awkward situation worse once he wasn’t dealt. The NBA intervened in the situation, telling the Pelicans they’d fine the organization $100,000 for every game he sat. Davis eventually found himself back in the lineup, where he was met with a chorus of boos from the home crowd.

After six seasons giving his all to the franchise, that’s got to hurt. Although, it’s hard to blame Pelicans fans for being frustrated with how things have played out.

Things hit a breaking point on Thursday when Davis left with agent Rich Paul mid-game against the Bulls after injuring his shoulder. GM Dell Demps was fired after the game as ownership reportedly was frustrated that Davis wasn’t traded. The injury was icing on the cake.

Ownership was livid with an injured Anthony Davis leaving arena during Thursday night’s game, sources say. Gayle Benson is telling associates she wants an overhaul of Pelicans and a search for a GM to take command of Davis trade talks and the reshaping of team’s future.

Davis deserves some of the blame for destroying his relationship with the organization. At the same time, he shouldn’t be blamed for wanting out. The Pelicans did nothing to surround him with the talent to compete. It’s a shitshow and there’s no indication things will get better any time soon.

So, the Pelicans should only do the logical thing, trade him this summer and rebuild. But, for teams looking to acquire him, if you’re not the Lakers, I’d think twice about giving away assets for the Pels big man.

For the past three weeks, his camp has sent out a clear message: Please trade me to Los Angeles. Here’s what ESPN’s Adrian Wojnarowski and Zach Lowe wrote back in late January.

“Davis’ plan is to treat any trade destination as a one-year stop — except, of course, the Lakers. Teams are learning that Davis’ stated intention will be to play the season elsewhere if traded outside of the Lakers, but move to the Lakers as a free agent in 2020.”

I’d view Davis’ willingness to leave New Orleans as a plea for immediate change. He’s got little desire to carry on with the team. However, if any NBA GM thinks they can acquire Davis and re-sign him, they’re probably going to be burned. The “29 teams” comments is a smokescreen designed to get the talented big man traded while not burning any bridges with any other team. Once he becomes a free agent at the end of next season, it’s safe to assume he’s heading for L.A. It’s written in the stars.