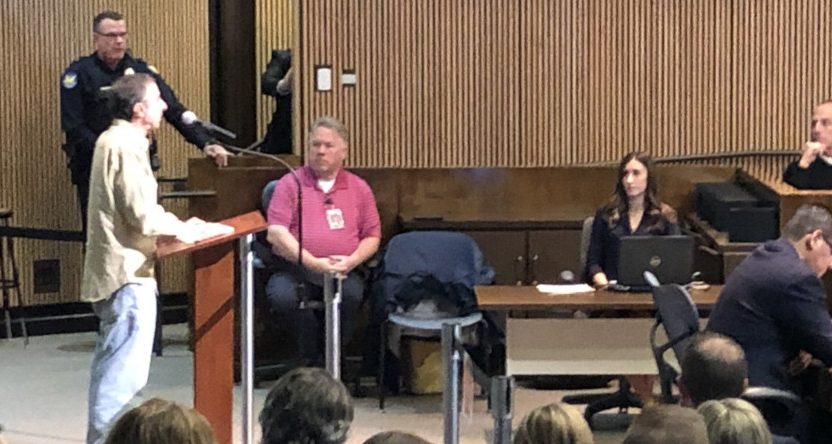 There are plenty of reasons to criticize public funding for sports stadiums, but actually shooting elected officials over that feels like a bridge too far. And yet, that’s what Larry Naman did in 1997, shooting Maricopa County (Arizona) Supervisor Mary Rose Wilcox in the rear end after she voted in favor of a sales tax to help pay for the construction of the Diamondbacks’ stadium, Chase Field.

Naman was found guilty of attempted first-degree murder, and wound up serving 12 years of a 15-year sentence and being released in 2010. And he showed up again in Arizona public debate Wednesday night, speaking against the proposed use of $150 million in Phoenix city funds for a renovation of Talking Stick Resort Arena (where the Suns play), which wound up passing. At the public comment on that motion, Naman not only showed up, but bragged about how he shot Wilcox:

Larry Naman just spoke in opposition.
He (proudly) mentioned he shot Maricopa Co. Supervisor Mary Rose Wilcox in 1997 because she voted for a tax to help fund Chase Field (link below!).
Someone spoke up after & denounced his threatening remarks.https://t.co/az3JSZ9NLZ pic.twitter.com/hD4jefzpmm

Larry Naman (the man who shot Mary Rose Wilcox over her vote on Chase Field) is now speaking: He says the public must be allowed to vote on this matter, says if council approves the deal it's equivalent to an "act of violence against the public" #Phoenix #Suns

The “act of violence against the public” line is notable, as that’s exactly what Naman said about his shooting of Wilcox:

Although he was facing a sentence of up to 21 years in prison after he was convicted, Naman told Wilcox, “I will say I’m sorry I shot you the day you stand before the court and admit what you did was an act of violence.”

Fortunately, Naman has not taken up arms against the current officials yet. But shooting someone because they vote for a stadium deal you disagree with is going way too far, and that’s what Naman did in the past. And it’s remarkable that he’s not only out of prison, but bragging about his past deeds here.