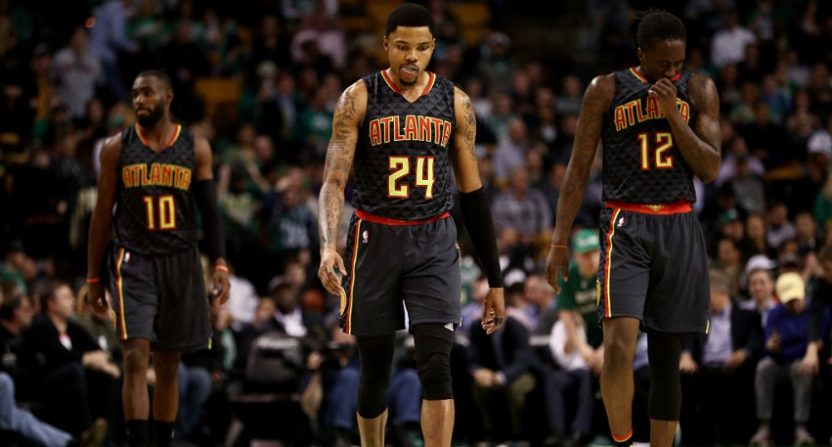 Can the Atlanta Hawks actually tailspin so badly down the stretch that they’ll actually miss the playoffs?

Atlanta committed 19 turnovers and shot 37.5 percent from the field in a 91-82 loss in Brooklyn on Sunday. It was the Hawks’ second loss to the Nets in a week and their ninth loss in 11 games. (The only wins during that stretch were against Philadelphia and Phoenix.)

The nosediving Hawks are now in sixth place in the Eastern Conference and only two games ahead of ninth-place Indiana with five very tough games remaining on their schedule.

“I think everybody’s disappointed with the loss, but at the end of the day we need to get some wins,” said Hawks All-Star forward Paul Millsap after Sunday’s game. Millsap had missed the previous seven games with left knee synovitis, but returned on Sunday and scored 14 points on 4-of-14 shooting off the bench.

Atlanta’s locker room was relatively calm and quiet after the loss to the Nets, but several players and team staffers couldn’t help but scoreboard watch. As Indiana and Cleveland began double overtime, players were watching the game on their phones and whispering to each other in hopes that the Pacers would lose. An Indiana win would’ve meant that Atlanta was only one game clear of ninth place, but Cleveland prevailed and the Hawks breathed a sigh of relief.

“As long as everyone keeps losing under us, we just gotta make it to the playoffs,” Millsap said. “If we get there, we feel like we have a good chance.”

As Dwight Howard tried to quietly exit the locker room without talking to the media, he spoke for less than 30 seconds on the current state of the team.

“We can’t focus on other teams. We gotta focus on us,” Howard said. “Gotta play team basketball. No one person can do it by ourselves.”

Milwaukee, Atlanta, Chicago, Miami, Indiana, Charlotte and Detroit (fifth through 11th in the East) are separated by just five games with five games remaining in the regular season. ESPN’s playoff odds projections still says the Hawks have an 89.6 percent chance to reach the postseason, but Atlanta still has one of the toughest remaining schedules in the East’s playoff chase. Atlanta plays Boston, Cleveland twice and chase participants Charlotte and Indiana, with no easy game among that quintet.

To easily break down what’s left for the East playoff contenders, here’s a master spreadsheet for each team’s remaining slate.

Of the seven teams listed here, Chicago has the easiest schedule the rest of the way, with all its games against Eastern Conference bottom-feeders. Milwaukee has some challenging games, but as long as it wins two or three of them, it’ll be fine. The same goes for Atlanta, but there isn’t an east game left in that bunch.

“Everybody’s calm. We’re still positive,” Hawks point guard Dennis Schroder told The Comeback. “We just have to make sure we’re competing every time we get out there on the court.”

Miami and Indiana are tied for eighth, but the Pacers have the decidedly easier schedule the rest of the way. The Heat have Washington twice and games against Cleveland and Toronto left, while Indiana has winnable road games against Orlando and Philadelphia. Charlotte and Detroit have no margin for error, and the Pistons’ last five games are absolutely brutal.

As long as the Hawks win games, they have nothing to worry about and will make the playoffs for the 10th straight season. They’re finally getting healthier after injuries to Millsap and fellow starters Kent Bazemore and Thabo Sefolosha, which has held them back during this tumultuous stretch. Millsap said his availability over the last five games will ultimately be up to the team’s medical staff, but he’ll probably play about 25 minutes per game down the stretch.

“Any time you lose some games, you’re fighting for playoffs or seeding, everybody’s a little frustrated,” Hawks head coach Mike Budenholzer told The Comeback. “But our group, I think, has a high belief in itself, wants to get to the next game, wants to get to do better. So I think they’ve been good to work with.”

The Hawks will probably make the playoffs unless they lose four of all five of their remaining games. But the team’s struggles has put itself in the position where there’s an outside chance that it’ll miss the playoffs for the first time in a decade. And Atlanta’s play must improve against Boston and Cleveland, otherwise the Falcons may not be the only ATL franchise that endures a massive collapse in 2017.