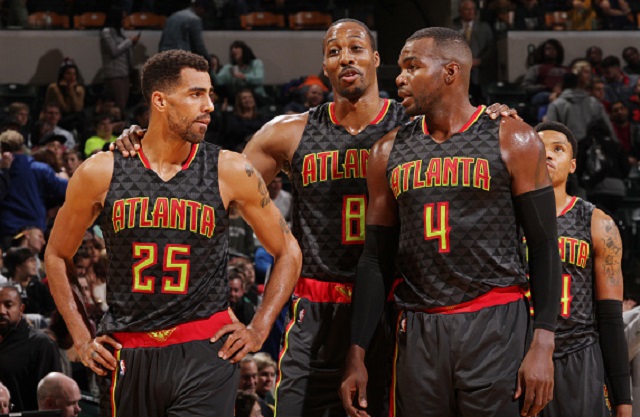 The Atlanta Hawks have decided against trading star Paul Millsap, instead focusing on making a playoff run with their current core.

A sense of relief flowed through the Atlanta Hawks locker room Tuesday night after All-Star forward Paul Millsap was told by management that he would not be traded, just days after veteran sharpshooter Kyle Korver was surprisingly dealt to the defending champion Cleveland Cavaliers.

“To know that that’s behind me, that’s good,” Millsap told reporters in Brooklyn prior to Tuesday’s 117-97 win over the Nets, Atlanta’s seventh straight victory.

“He’s a great player, and he’s one that means a lot to our franchise, our organization,” said Hawks Coach and President of Basketball Operations Mike Budenholzer. “I think him staying a part of this group and pushing forward this year is important to us.”

Millsap was told by Budenholzer and team executives that he was just too important for the team to deal. Atlanta is 22-13 when he’s been in the lineup and 0-3 when he’s sat out. The Hawks outscore their opponents by 5.6 points per 100 possessions when on the floor, according to NBA.com. But when he’s on the bench, Atlanta is outscored by a whopping 10.3 points per 100. That 15.9 point differential would be pretty damn hard to overcome had the Hawks elected to trade Millsap.

“I think they knew where I stood all along,” Millsap said, expressing his continuing desire to remain in Atlanta.

A Millsap trade was the expected outcome in the hours and days after Korver was traded to Cleveland for forward Mike Dunleavy, point guard Mo Williams (who will almost certainly never see the court for the Hawks) and a protected 2019 first-round pick. Several teams, including Toronto, Denver, Sacramento, Philadelphia and New Orleans, had reportedly shown interest in the three-time All-Star following the Korver deal.

Korver is another core player gone from the Atlanta team that won 60 games just two years ago. Al Horford signed with Boston in July, Jeff Teague was traded to Indiana in June and DeMarre Carroll left for Toronto following that 2014-15 season.

“Everyone was a bit caught off guard,” Hawks shooting guard Kent Bazemore told The Comeback, regarding the Korver trade. “Everyone on this team and the city of Atlanta knows how much he meant to this organization. But at the end of the day, it’s a business where it’s hard to say goodbye.”

Budenholzer told The Comeback that he addressed the team after the Korver trade, but said that what he said to his players “will kind of stay between me and them.”

The next order of business for Budenholzer was determining who would inherit Korver’s nearly 28 minutes per game. So far, the main recipient and beneficiary of the Korver trade has been Tim Hardaway Jr. THJ has averaged 15 points per game on just over 44 percent shooting in the three games since Korver was moved, including 22 points in 30 minutes in Saturday’s win at Dallas.

“Coach Bud told me in Dallas, ‘Are you ready to play? We’re going to need you out there,’” Hardaway told The Comeback. “Everybody’s just trying to take advantage of the opportunity given to them.”

Hardaway is the next Hawks player — along with Bazemore, Dennis Schroder and former star forward DeMarre Carroll — in a long line of youngsters developed in this Hawks program under Budenholzer’s guidance. (Hardaway is obviously not at that level yet.) Nets head coach Kenny Atkinson was an assistant for three years under Bud before taking the Brooklyn job after last season, and knows all about how Atlanta cultivates young talent.

“I think it’s a credit to the Hawks and their program,” Atkinson said. “I do think there’s a belief in development there, and a belief in playing younger players.”

“We’ve turned the page and the younger guys are starting to get minutes,” Bazemore said, “so we turned our focus to them and we’re really empowering them to be the best that they can be and still try to win games.”

Now that the Millsap rumors are behind them, for the time being, the Hawks have breathed a collective sigh of relief and are looking to build on their current winning streak.

“It takes pressure off a lot of guys that he’s going to be here, he’s here to stay,” Hardaway said. “It makes him feel wanted, and that’s what we need.”

“The group’s been good, regardless of what’s been going on,” Budenholzer said.

That group will include Dunleavy’s presence, which was in doubt after he initially refused to report to the team following his trade from Cleveland, looking to be bought out in hopes of signing with a contending team like Golden State.

“I think I was pretty clear and pretty direct with him that I thought he was a great fit with us,” Budenholzer said.

Spirits are now high for the Hawks going into Friday’s huge home game against Boston, which features Al Horford’s return to Atlanta.

“Everybody’s happy with where we’re at,” Millsap told The Comeback. “No matter what happens within the team, we still gotta get out there and win games.”

Millsap’s contract is up at the end of the season, putting his long-term place within the team’s core of Schroder, Bazemore and Dwight Howard in doubt. But the team will apparently worry about that later. Keeping Millsap past the Feb. 23 trade deadline would put Atlanta at risk of losing an All-Star player for nothing in free agency for the second consecutive summer.

For now, that hasn’t prevented the Hawks from blocking out the noise and playing their best basketball of the season.

“For us to endure that and bounce back the way we have says a lot about this team,” Bazemore said. “It says we aren’t going to give up, regardless of what we’re going through.”