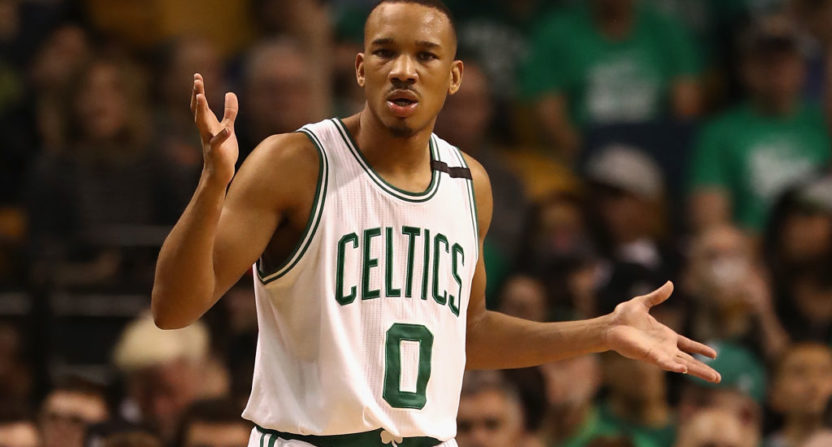 The NBA announced its All-Defensive teams on Monday, and there was a notable snub that players around the league noticed. Avery Bradley, the lockdown perimeter defender for a Celtics team that finished atop the East, failed to earn a spot.

Unsurprisingly, Draymond Green, Rudy Gobert and Kawhi Leonard led the first team by a wide margin. Chris Paul and Patrick Beverley earned the two guard spots to round out the first team. Tony Allen and Danny Green were the two guards voted to the second team, with Anthony Davis, Andre Roberson and Giannis Antetokounmpo rounding out that group.

Bradley was the first snub with 46 points, which is actually a lot more than Antetokounmpo’s 35. But selections are position-specific, and Bradley fell well short of the second-team guards, Allen (80 points) and Green (68).

Here’s how players from all over the NBA reacted:

How did Avery Bradley not make first or second team all defense ????

How the hell is Avery Bradley not on the all defensive team?? That's crazy!!

No Avery Bradley all-defense?! On the behalf of the players… he deserves it!

How the hell Avery Bradley is not in the 1st all defensive team ?

What are yall's thoughts on Avery Bradley not making an All NBA Defensive team? ?

I'm upset I didn't make it…. but HOW DO YOU NOT HAVE Avery Bradley on either team??? Makes no sense whatsoever. #nohate #realtalk https://t.co/vj7i0PtoT8

Avery Bradley got my vote ??

Smh they not watchin these games bro lol https://t.co/uIQ0FFobpG

A few retired players chimed in as well:

He's viewed as a Top 3 wing defender in this league by players!!! https://t.co/G3gjZvFHUY

No way #AveryBradley shouldn't have made the all defensive team @nba

Dont care what team you put Avery Bradley on but he should be on an All Defensive team. No question about it.

Notice how a lot of those guys are shooting guards who have gone head-to-head with Bradley.

By the numbers, Bradley is far from the best perimeter defender in the NBA. He allowed 0.992 points per possession, although sharing a backcourt with Isaiah Thomas, possibly the worst defensive point guard in the league, contributed to that. (Oddly enough, Thomas got a vote here too.)

Although there wasn’t as much Twitter outrage from players, Wizards guard John Wall was another backcourt snub. Wall joined Green as the two players to average at least two steals per game this season. Even though the advanced stats favor Wall ahead of Bradley, he finished eight points behind the Celtics guard.

You can take award voting only so seriously. After all, Thomas managed to get a vote. By the numbers, Bradley is also a somewhat questionable selection. But I think it’s pretty clear he’d make the cut if the players had a vote.