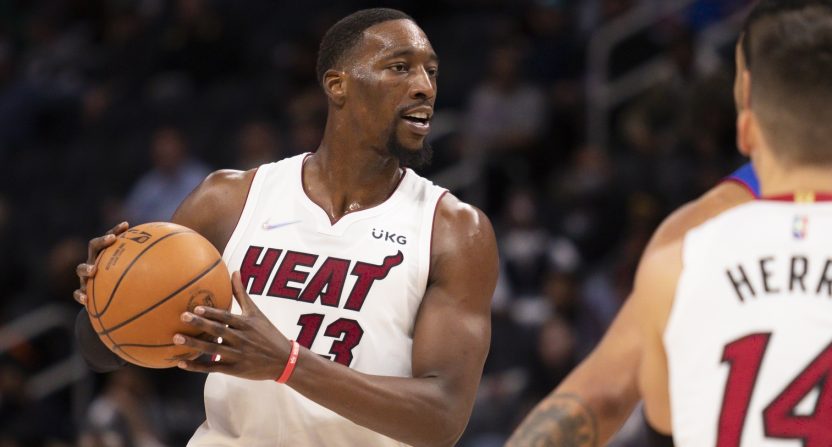 Miami Heat All-Star center Bam Adebayo has become of the league’s best big men, but he’s going to be spending some time on the sidelines for a while. The 6’9″ center will undergo surgery to repair a torn ulnar collateral ligament in his right thumb and, according to ESPN’s Adrian Wojnarowski, he’s expected to be out of action for four to six weeks. That comes out to around 15 to 20 games, depending on how long he’s out.

It’s a tough blow for the Heat, who are trying to keep pace in the Eastern Conference playoff picture. Currently two games back of the Brooklyn Nets for the top spot, it would also be very easy to fall into the back and even out of the playoffs given how jumbled everything is.

The 24-year-old is a key cog in the Miami offense, averaging 18.7 points, 10.2 rebounds, 3.2 assists, and 1.1 steals per game in 18 games so far this season. He’s also a strong defensive presence for the Heat, having been voted to the NBA All-Defensive Second Team in the last two seasons.

When news of how long Adebayo would be out of action hit Twitter, there was a strong reaction from many in the NBA world, much of which revolved around how tough this stretch is going to be for the remaining Heat players.

Markieff Morris hasn’t played since he took the shot from Jokic on Nov. 8. His return looms large because him and Dedmon could (and should) soak up most of the minutes at the 5. This won’t be easy to overcome, though. https://t.co/1CJtffYIY3

Six weeks of Dedmon-Yurtseven at center this will be…… a lot https://t.co/fBqS8EBBm8

Having your only young core player out for this long in a competitive East isn’t great https://t.co/FUH5ctN18f

The good news for the Heat is that the East does appear to be wide open, so even if they fall off in the weeks ahead, there should be time to get back on track when Adebayo returns to action.