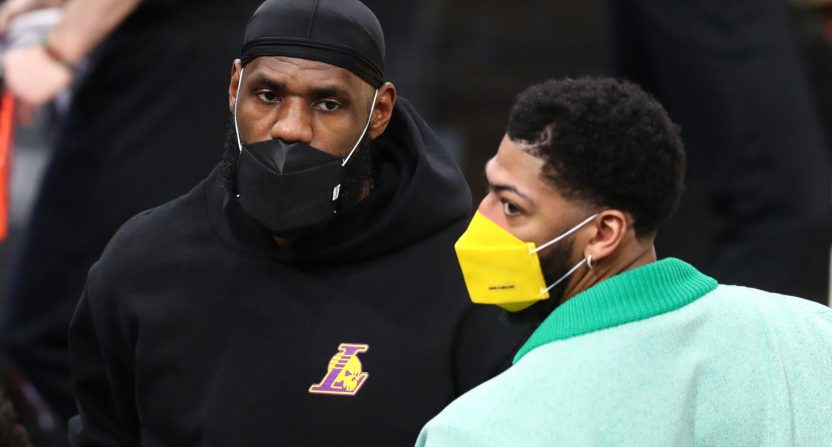 The Los Angeles Lakers are a damaged luxury ship with a skeleton crew. The games go on, but we’re not exactly sure when the reinforcements will arrive.

The Lakers (32-19) are crawling to the finish line, hoping to have a healthy LeBron James and Anthony Davis back in time for the playoffs. Since losing James to a high ankle sprain last month, the Lakers are 4-6 and have plummeted to the No. 5 seed in the Western Conference.

Los Angeles was already missing Davis, who has been out since February with an Achilles injury. When will the Lakers be back to full strength? That’s unknown. Officially there’s no set timetable. According to Shams Charania of The Athletic, LeBron could be out for a month. Marc Stein of the New York Times reported that Davis could return as soon as next week. However, coach Frank Vogel said that Davis is “still a ways away.”

With James and Davis, the defending champs rolled to a 21-6 record and were the top-seed in the West. Without them, they have fallen apart, especially on offense where there have ranked No. 29 in offensive efficiency during the past nine games. They have failed to score 100 points five times since James went down.

Injuries aren’t a major surprise. The NBA did the Lakers no favors by starting the 2020-21 season just a few months after L.A. won the title. This truncated 72-game season is putting additional stress on many players’ bodies. James, 36, has been mostly indestructible for most of 18-year career, but this will be the second time in his three seasons in L.A. that he’ll miss significant action. Davis has had occasional injuries throughout his career.

Until then, the Lakers must rely upon the likes of Dennis Schröder, Kyle Kuzma, Montrezl Harrell, Andre Drummond, Marc Gasol and Ben McLemore. They’re good players, nice complementary pieces. But asking them to carry this team down the stretch is too much. Schröder, Harrell, and Gasol were brought in the off-season to bolster the roster, not take leading roles.. There’s optimism that recently acquired Drummond and McLemore can add a spark.

It’s not time to hit the panic button, but Vogel must be concerned. This is a bad time to be short-handed. The Lakers face the fifth-toughest schedule remaining in the league, playing the Utah Jazz twice, the Phoenix Suns, Brooklyn Nets, the Los Angeles Clippers, and Denver Nuggets.

It makes sense for the Lakers to be extra cautious with their stars. There’s no need to rush them back and risk further injury that might lead to James and Davis missing time in the playoffs. But how long do they wait? How far will they fall? And does L.A. not really care about the standings?

There are 21 games left before the playoffs start in late May. Unlike last year, there will be no bubble. Teams will travel. There will be fans, and the number of spectators allowed in arenas figures to increase as vaccinations rise. That means homecourt advantage, unlike last year, could be a significant factor.

Utah (38-12) seems likely to claim homecourt advantage throughout the postseason. The Jazz have been the league’s most dominating team by far. L.A. is just trying to reach a top-four slot and not fall to the back of the loaded West. But it seems probable that their path to another title will be considerably more difficult than last year.

Early indications are that Davis is far closer to returning than James. In the meanwhile, the Lakers could be staring at the No. 6 seed or worse. Utah, Phoenix, the Clippers, Denver, and the Portland Trail Blazers might finish ahead of them in the standings. The worst-case scenario would be falling all the way to the play-in tournament.

ESPN’s Zach Lowe gave voice to that possibility on The Jump.

“I’m totally confident in the Lakers if A) they’re healthy when it matters and B) they stay out of the Play-In,” he said. “Any time you’re in a one-and-done or two-and-done situation, you are one big Zion game, one cold LeBron game, one twisted ankle away from being out of the playoffs.”

If the Lakers are healthy, they will have the advantage they enjoyed last year: the best 1-2 punch in the league. James leads the league, by far, in real-plus minus (+9.48). Davis is posting his highest effective field goal percentage of his career (.555). L.A. also has the best defense in the NBA in terms of efficiency.

Utah has been smothering opponents (+9.7 NBA scoring margin). Chris Paul has made a huge difference for the Sun by taking pressure off Devin Booker. The Clippers have the best three-point shooting team in the league. Denver has an un-guardable magician in Nikola Jokić. And Portland’s Damian Lillard can single-handedly end your season.

The Lakers aren’t in trouble yet, but they could be if James and Davis don’t return 100 percent.