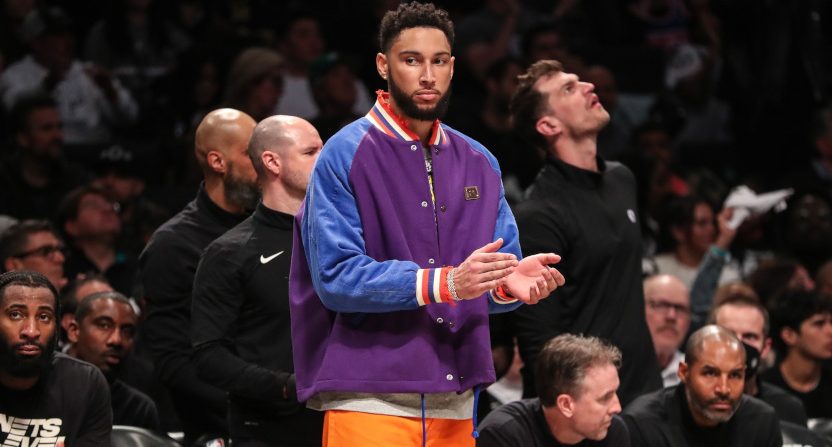 While the Brooklyn Nets are apparently falling apart in real-time, there is some good news (in theory) for fans of the NBA franchise in that Ben Simmons will be back in a Brooklyn uniform next season.

According to The Athletic’s Sam Amark, the team is expected to keep Simmons while it deals with the impending departure of Kevin Durant and the whole Kyrie Irving situation.

Source close to the situation tells @TheAthletic that the Nets are expected to keep Ben Simmons. Some had rightfully wondered if there would be a ripple effect here on the 25-year-old's Nets future. https://t.co/2TnO6n71xI

After Simmons was traded last season from Philadelphia to Brooklyn, he spent the rest of the year injured, watching the team get bounced from the playoffs. Yet despite the storm brewing in Brooklyn with Durant, Simmons seems to be in a good place.

The team even posted a picture on social media of Simmons with the caption, “Feeling Incredible.” It’s unclear if that’s related to the Durant news or not.

It will be interesting to see if that feeling lasts long with Simmons and the Nets. The team is going to have to make some major changes whether they intended to or not. Their top two superstars, who have barely played together, want out (at least one says now he wants to stay for now), while their up-and-coming star has yet to play in a Brooklyn uniform.

From the looks of things as of now, this is about to be his team and he is going to have to lead the Nets to the promised land in the future if he wants to remake his reputation. Because Kevin Durant has made it perfectly clear his days in Brooklyn are over.