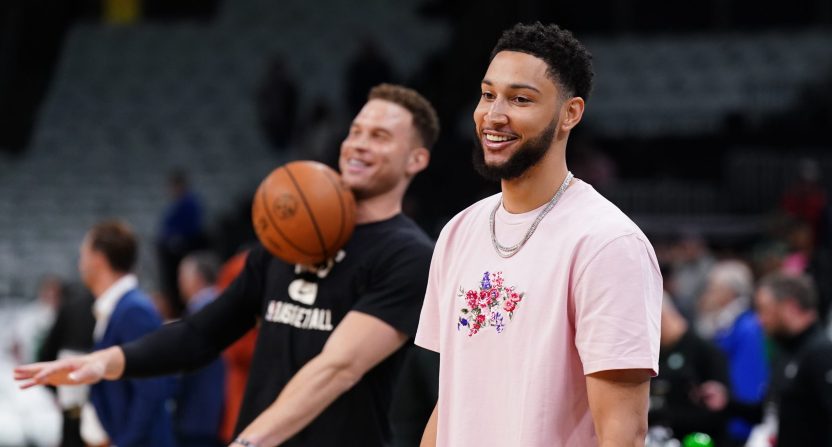 The Brooklyn Nets will need to win on Monday to keep their playoff hopes alive, as the team currently finds themselves down 3-0 in their first-round series against the Boston Celtics. They will do so without star guard Ben Simmons, who will sit out despite previous reports that he was eyeing Monday’s game as a potential return date.

It has been a whirlwind of a year for Simmons, who has not played in an NBA game this season, originally citing that he was not mentally ready to play while on the Philadelphia 76ers. He has also been dealing with a back injury which has hampered him throughout the season.

NBA insider Adrian Wojnarowski reported on Monday that Simmons and agent Rich Paul met with Nets GM Sean Marks to discuss where they go from here, citing both “mental and physical hurdles” to get through in order for Simmons to get back on the court.

Both sides reportedly feel that Simmons has progressed a ton physically over the past two weeks, but they will continue to work on the “hurdles” that need to be addressed.

Simmons reiterated desire to play for Nets and sides talked on how they’ll work together to try and get there. Both groups believe Simmons had two good weeks of physical ramp-up thru Sunday, but ultimately realized there are still mental and physical hurdles that need addressing.

Mental health is obviously extremely important and it should certainly come first and foremost when it comes to NBA players.

However, many around the NBA world are a bit confused as to what exactly is going on between the Nets and Simmons with all these reports of a potential return.

Whoever leaked the 'Ben Simmons plans to return' stuff in the days leading up to Game 4 did him and the Nets zero favors.

The @30for30 on the past year of Ben Simmons' career is going to be epic..

I understand the frustration with Ben Simmons, but the shots he's taking today are inconsistent with the ongoing conversation about mental/physical well-being.
It's fair to criticize his game, but who are we to question whether he's mentally/phsyically able to play?

I genuinely want a candid, honest interview from Ben Simmons about everything he’s gone through this past year and what he’s had to deal with

It is certainly a hard situation to decipher.

With all of these conflicting reports of Simmons’ potential return continuing to get pushed back, it is not doing him any favors as many are taking their chance to blast him on social media.

Ben Simmons will end this season with more meeting between his agent and teams’ front office staffs than games played https://t.co/9ocCoFZ5W4

If anything could bring the Nets together tonight it’s kicking Ben Simmons off the bench.

If Simmons is really struggling with his mental health, it might be in his best interest to completely shut him down for the rest of the year and let him get in the right headspace for the 2022 NBA season.