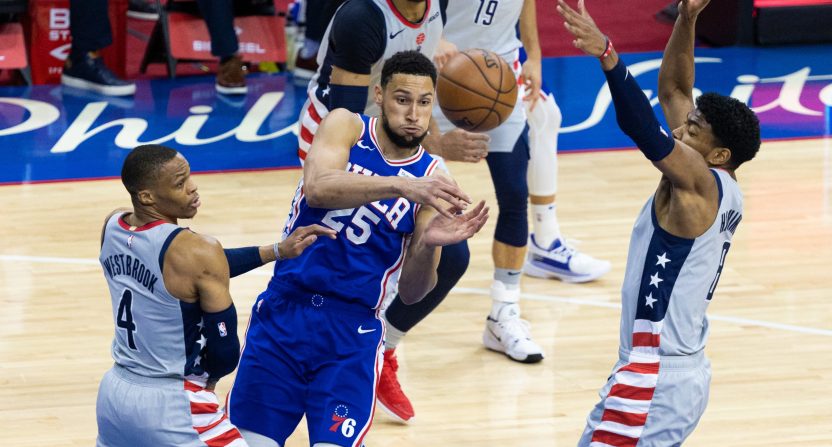 The Ben Simmons Era appears to officially be over in Philadelphia, not that it would come to much surprise to many 76ers fans.

According to ESPN’s Adrian Wojnarowski, Simmons won’t report for the opening of training camp next week and “intends to never play another game for the franchise.”

ESPN Sources: Philadelphia 76ers All-Star Ben Simmons will not report for opening of training camp next week and intends to never play another game for the franchise. Simmons hasn’t spoken to team since a late August meeting when he communicated this message to Sixers officials.

Woj also noted that despite the fact that the Sixers can fine or suspend Simmons for missing training camp, he remains undeterred.

Simmons is clearly aware of sanctions available to organization to fine and suspend him, including withholding of salary. But so far, Simmons appears willing to carry out a plan of forcing his way to a new team. Sixers have yet to find a a trade they’re willing to make for him. https://t.co/vxSrBUWjXw

The relationship between Simmons, the Sixers, and the fans was strained before last year’s playoff series against the Atlanta Hawks, but the way that played out was truly the moment everything fell apart. While Joel Embiid was throwing down 28.1 points and 10.5 rebounds despite torn cartilage in his right knee, Simmons averaged 9.9 points and seemed incapable of making shots when it mattered, even giving up opportunities to try to be the hero in crunch time.

When Sixers coach Doc Rivers was asked if Simmons could be a point guard on a championship team, he replied, “I don’t know the answer to that right now.” That indictment has carried on through the summer and led to this point as the Sixers have tried to find a suitable trade partner for Simmons but have yet to. Clearly, Simmons has decided he’s going to force Philly to make a deal no matter what, at least in theory.

It’s a strange position, all things considered. Both the Sixers and Simmons seem like they’re in agreement that it’s best for him to move on. Unlike the James Harden situation or the Kawhi Leonard with the Spurs, there isn’t much debate about what the right thing to do is. It’s just a matter of the Sixers finding a deal they can live with. We’ll see how long they hold out now that Simmons is trying to undercut that leverage for the sake of speed.

Meanwhile, NBA fans and media certainly had some strong thoughts about Simmons and the way this has all played out.

his first game back in Philly, that crowd going to be “LeBron returning to Cleveland after The Decision” mad. https://t.co/xwYh9A5jIl

Ben Simmons sank the 76ers' championship hopes by refusing to shoot & has now tanked his trade value by refusing to show up. He has some legit gripes about being thrown under the bus after his flop but Philly won't forgive him for running from accountability for his own failings.

However this plays out, the first time Simmons has to play in Philadelphia is going to be some serious must-see TV in terms of how the Philly faithful handle it. Given their history, it does not bode well. But in this instance, Ben might have been one of the few people to truly earn it.