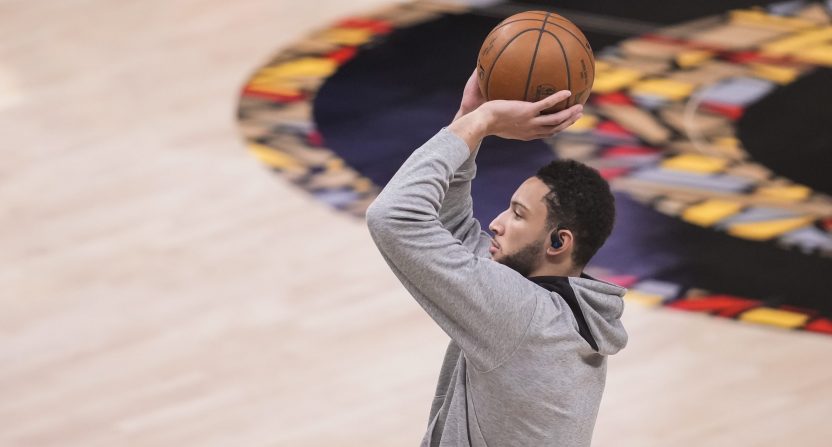 Ben Simmons is back at practice with the Philadelphia 76ers but that doesn’t mean things are going well. In fact, you could even make the case that things are now even worse than they were before.

We knew it was going to be an intriguing year for Simmons and the Sixers but we had no idea just how much. Following all the drama that came after Simmons’ poor playoff performance last year, the guard made it clear that he didn’t want to report to camp and demanded a trade. Head coach Doc Rivers tried to smooth things over and media critics certainly had opinions as well. But it wasn’t until Simmons realized how much money he might lose that made him show up for practice.

However, just because he showed up doesn’t mean he’s trying very hard. And when photos emerged of Simmons practicing with his phone in his pocket on Monday, everyone knew this was going to get ugly.

Ben Simmons practicing in sweatpants with his phone in his pocket. pic.twitter.com/MEdQLxudcK

Sure enough, it was reported on Tuesday morning that Simmons has been suspended for one game for “detrimental conduct” to the team. That means that Simmons will not play in the Sixers’ season opener against the New Orleans Pelicans on Wednesday.

The 76ers say Ben Simmons has been suspended for one game for “detrimental conduct” to the team.

Simmons will not play the 76ers’ season opener at New Orleans Wednesday night.

As for what caused the kerfuffle, it actually wasn’t the phone. Instead, it was Simmons refusing to take part in a defensive drill, which, is too ironic for many Sixers fans to truly appreciate.

Rivers then told Simmons he should go home, and Simmons dropped the ball and left.

Rivers addressed the media after practice and said that he “thought [Simmons] was a distraction today,” adding “I don’t think he wanted to do what everyone else was doing.”

Doc Rivers: “I thought he was a distraction today. I didn’t think he wanted to do what everyone else was doing.”

“I’m going to give Ben every chance to be part of the team…as a coach I have to protect the team first,” Rivers added. “My job as a coach is to keep trying to get guys to buy in … that’s my job. I’m not going to stop my job.”

Perhaps the harshest critic of Simmons on the day was Joel Embiid, who said it’s not the job of the players to “babysit somebody.”

“Our job is not to babysit somebody.”

Also, it’s worth noting that Embiid says that he and Simmons have not spoken since practice started.

Joel Embiid says he has not talked to Ben Simmons.

There’s pretty much no way the Simmons-Sixers saga doesn’t end poorly, but in the meantime, the social media reactions are coming in hot and coming in strong.

showed up this season with no interest in being engaged? I guess you could say that Ben Simmons was there for the wrong reasons https://t.co/SbyAxC0l8o

Ben Simmons should try chess. I practice with my phone in my pocket all the time, and I don’t have to shot 3s.

Not to justify Ben Simmons' behavior but the 76ers had to see this coming. He told them to their faces, with no ambiguity, no wiggle room, that he was done playing for Philadelphia. He showed up to avoid financial losses, not to win games. Acting up is his only play to get dealt.

I’d love to talk to the guy in Ben Simmons circle who keeps reassuring him that every move he’s made is the correct one. Fascinating twist of logic

The big question is, if Simmons wants to be traded but keeps acting like this, how will any other NBA team give up valuable resources to acquire him without assuming he’s just going to do the same thing to them in a couple of years? The mind, it boggles.