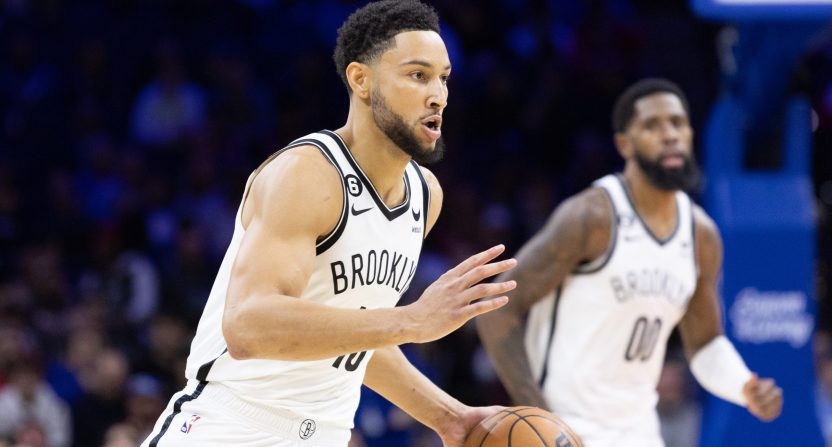 But maybe there aren’t as many of those fans now, and maybe even the haters don’t hate the controversial player so much.

Making his first appearance in Philly since last March, one month after the Philadelphia 76ers traded him to the Nets, Simmons got a more mixed, less heated reception this time around. During that March visit, 76ers fans heckled, booed and cursed at Simmons before and during the game, inside and outside the arena.

Simmons and the Nets were prepared for battle entering Tuesday night’s game. Nets head coach Jacque Vaughn predicted, “This will be a Vince Vaughn earmuffs night, tonight,” (via the New York Post). That’s a reference to the 2003 movie Old School, where the actor taught his young son to quickly cover his ears to block out foul language.

There were some boos and foul language in the air, sure, but many fans also met Simmons with enthusiasm. After his pregame workout, he climbed in the stands to sign autographs, pose for selfies and greet fans.

Ben Simmons literally climbed into the stands to sign autographs and take selfies with fans after his pregame workout. pic.twitter.com/gCfAlVWtpR

Simmons didn’t just burn bridges when he left Philadelphia, he scorched them with a flamethrower. He ripped fans for criticizing him, battled with the team to recoup salary that had been withheld, and generally made it clear he was happy to be out of Philly.

Fans booed Simmons when he was introduced before the game, but fans on Twitter noted they’ve seen worse, and it was not as bad as they expected. Maybe Philly fans, who are notoriously hard core about everything, are mellowing about Simmons.

Ben Simmons gets introduced in the Nets starting lineup 👀

The fans started to get on Simmons at one point after he missed a layup but he grabbed the rebound, scored, then put a finger to his lips as if to tell the crowd, “Quiet.”

Ben Simmons to the crowd after this putback 🤫 pic.twitter.com/wlOmOoCQqC

The NBA world had fun watching how “The City of Brotherly Love,” greeted their former player.

“He (Ben Simmons) wearing that big ol jacket because he got a bulletproof vest under there” – Charles Barkley 😂 pic.twitter.com/jC9adL2s1v

Ben is a good dude who got a bad rap from a propaganda machine called "the media" who wrote a bad narrative about him.

But Ben is really a good dude!

Bro bricked a layup, shushed and then won the Oscar a play later

Philly is one insane sports city to play in…even more when they hate you. Ben Simmons doing a good job so far.

Ben Simmons every time he touches the ball. pic.twitter.com/Dqs7BiT7i0