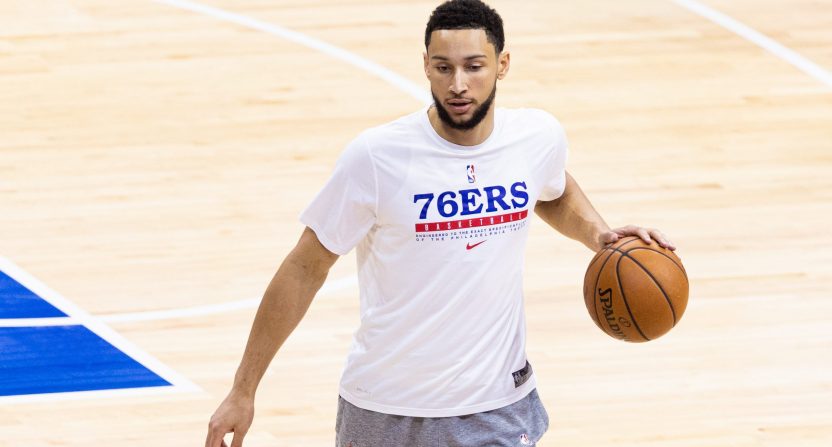 The Ben Simmons Situation in Philadelphia has felt untenable since the aftermath of Game 7 against the Atlanta Hawks that saw Doc Rivers and Joel Embiid dragging his play.

Over the summer, Simmons reportedly met with the Sixers front office and stated his desire to be traded in fairly final terms. The team, though, either underwhelmed by trade offers or convinced they could rehabilitate Simmons’ relationship with the organization and/or his trade value, held onto him instead.

At that point, things were inevitably going to go downhill, as we’ve seen in the recent past when star-caliber players (and Simmons remains that, albeit a star with a massive contract and questions about his playoff playability) like Jimmy Butler and James Harden forced their way out.

Simmons, though, had much less leverage; under contract through the summer of 2025, there’s no threat of him walking and Philadelphia not getting anything in return. That contract also both limits his possible destinations (teams near the tax line would struggle to send out matching salary without sending out another max-level player) while also reducing his ability to steer his path (because, again, there’s no threat of him immediately leaving, which is how we ended up with rumored teams not usually in play for big names, like the Pacers.)

Unlike Butler and Harden and others, though, Simmons and his camp have proven unable to budge the Sixers, thanks in large part to their bumbling efforts. First, Simmons held out, costing himself a ton of money very quickly, tipping his hand, and gaining basically nothing aside from the scorn of fans and other Philly athletes. Then Simmons tried the Harden path of “showing up and doing the bare minimum to not get fined or suspended”, which led to him being dismissed from practice and suspended for the team’s first game after he refused to participate in a drill.

Having failed on those fronts, today we got maybe the most predictable of updates:

Ben Simmons described back tightness to several Sixers staff members and was briefly treated for it today, sources tell ESPN.

Listen, Simmons could very well have legitimately felt a twinge in his back. He hasn’t exactly been a full workout participant, and it also didn’t keep him out for the remainder of practice, as Woj updated:

The Sixers' medical staff cleared Simmons to participate in the workout after the back treatment, sources tell ESPN. The Sixers had hoped to see Simmons in the workout today and have him go through shoot-around on Friday morning prior to game vs. Nets. https://t.co/WygyAnShmz

But in the context of the entire situation, it’s almost impossible to see this news and not immediately think that this is just the next box on the How To Get Traded checklist. Simmons clearly doesn’t want to play for the Sixers, and something like a back flareup is the sort of thing that a player who doesn’t want to play might point to. If anything, this should have been one of his first options, as it would have saved a lot of face while also preserving a lot more leverage as a tactic before you’ve publicly advertised that you don’t want to play at all. If anything, that they sent him right back onto the court is yet another example of how poorly-suited Simmons apparently is to this entire process.

Simmons should be the sympathetic figure here! Yes, he had a tough series against the Hawks, but they didn’t lose strictly because of him. Embiid and Rivers were both either inelegant or outright cruel when they made their postgame comments throwing Simmons under the bus as if he wasn’t still a key franchise player. Then the team ignored Simmons’ private trade request, apparently trying to call a bluff that wasn’t actually a bluff.

But the way Simmons and his camp have handled the last couple of months has made it pretty tough to be completely on his side, to the point that a Woj tweet about a back issue becomes a flashpoint moment for the entire NBA world, arguably overshadowing the league’s opening week. Something has to give at some point here.