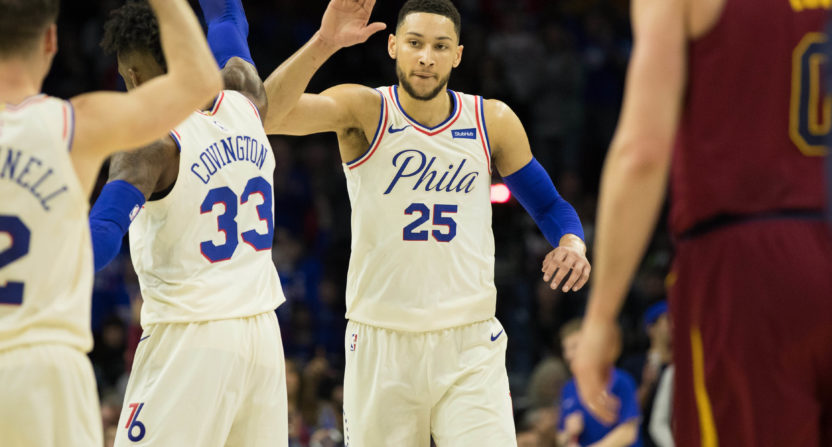 For several months now, a debate has raged among fans from Salt Lake City to Philadelphia and everywhere in between over who should win the NBA’s Rookie of the Year award. Should it be Donovan Mitchell, the high-flying, clutch-shooting Jazz guard who has scored 20.7 points per game this season? Or should it be Ben Simmons, the freakish 76ers point-forward with remarkable vision and a penchant for triple-doubles who has averaged 16-8-8?

No matter who you think ultimately deserves the honor, it’s hard to deny that both players are having incredible seasons clearly deserving of recognition. Unless, that is, you’re Ben Simmons.

In an interview with ESPN’s Chris Haynes published Monday, Simmons said that he would “100 percent” pick himself to win Rookie of the Year.

“If you look at the numbers, you will see,” he said. “People who know the game know.”

And although it was somewhat brash of Simmons to claim the award so confidently, that wasn’t the most provocative part of his interview. The really disrespectful part came when he was asked about other rookies.

When the 6-foot-10 point guard was told the Rookie of the Year race appears to be a two-man show, he buried his head down and proceeded to chuckle. Asked what rookies have caught his attention this year, he didn’t mince words.

“None,” Simmons responded promptly. “I want to be where the greats are. So, for me, I watch the guys like [Kevin Durant], [LeBron James], [Stephen] Curry, Russell [Westbrook]. Guys like that. That’s where I want to be. I think for me, that’s what I love to watch.”

Whew, he couldn’t even offer a cliche about “lots of great players?” Maybe a nod to “a bunch of guys across the league?” That was too much to ask?

Simmons was clearly trying to send a message with his comments. He’s going to tell it like he sees it, no matter who might get annoyed.

As for Mitchell, he responded to Simmons’ bravado in gif form.

The NBA’s postseason awards won’t be announced until June 25, which leaves a whole lot of time for debate over who deserves Rookie of the Year (even after the ballots are in), as well as further trash talk from the top candidates.