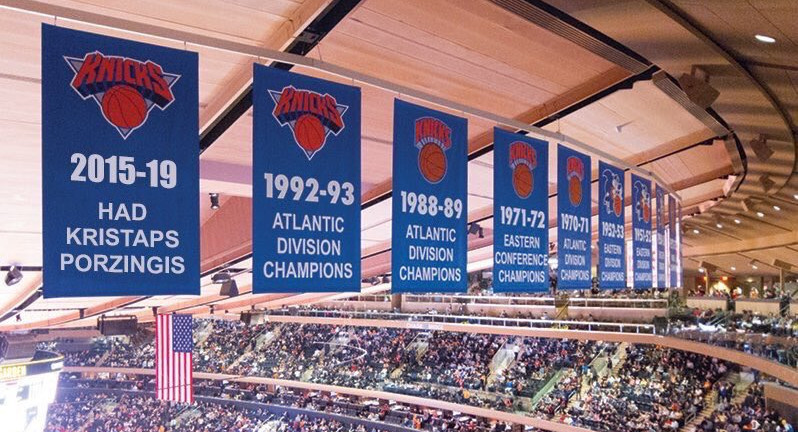 The NBA world blew up Thursday afternoon, with reports that New York Knicks’ star Kristaps Porzingis was unhappy quickly followed by the news that he was traded to the Dallas Mavericks (along with Tim Hardaway Jr. and Courtney Lee, for Dennis Smith Jr., DeAndre Jordan, Wesley Matthews and “draft compensation”). And as usual for big NBA moves, this led to some incredible Twitter commentary. Here are a dozen of the best tweets around it, organized according to theme.

NBA players weighing in: This sparked commentary from everyone from the Sixers’ Joel Embiid to the Knicks’ own Kevin Knox.

When you're the only player left on the Knicks https://t.co/esC7iaYfsw

Crushed Knicks’ fans: Unsurprisingly, plenty of Knicks’ fans weren’t thrilled that the best player the team’s had in a long while is being traded away at age 23 largely in pursuit of cap space. Let’s check in on how this is going for the likes of Rolling Stone entertainment writer Alan Sepinwall (who used quite the Sopranos GIF), famed chef and author Eddie Huang, and ESPN’s Ariel Helwani:

People bashing Jim Dolan: Shockingly, much of the blame here is being placed on Knicks’ owner Jim Dolan, who really, really cares what people think of him. Maybe the “Nothing will change until Dolan sells the team” FS1 subway ads (which led to Dolan personally calling Fox chairman Rupert Murdoch to have them removed) were right after all. At any rate, this led to a lot of funny tweets about Dolan:

[James Dolan spends year after year utterly ruining the basketball team he owns]
"Billionaires earned their wealth through their savvy."

James Dolan’s angry ballad about not signing Kevin Durant is already written, he just doesn’t know it yet

Thoughts on how Stephen A. Smith will take this: Who needs Smith’s actual reaction when Twitter can predict it?

Stephen A Smith is either gonna:

1) have a coronary on-air

The Knicks plan is to sign both Harper AND Machado.

A shot at the team’s summer plans: At least they’re using the cap space for something, right?

Another suggestion of how they could use that cap space:

Unicorn Offered As Ritual Sacrifice On Altar Of Free Agency

Jason Garrett is not believed to be a part of the package going from Dallas to New York for Kristaps Porzingis.

A response to Joel Embiid: And last but not least, that Embiid tweet from earlier got some great responses, but this one particularly stood out.