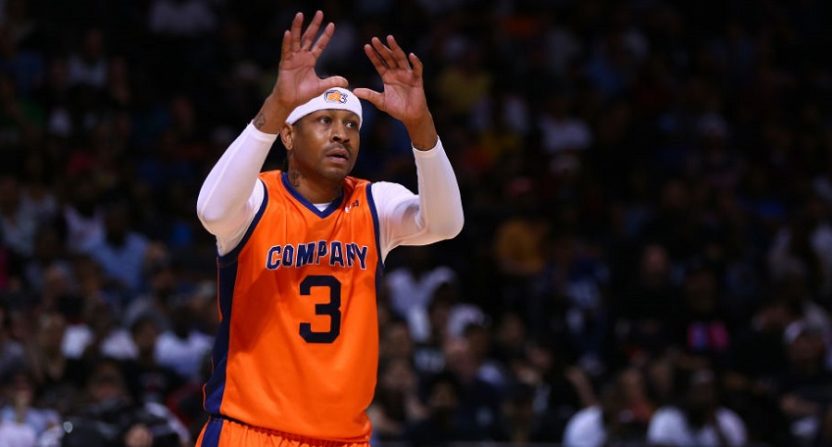 Though the Big 3 has all the tools and the components for an exciting summer diversion are there, important tweaks and adjustments are necessary for the venture to become a successful, viable and lasting league and sports entertainment operation.

The atmosphere was there. The positive optics were there, including a strong nostalgia factor. The crowd, listed as 15,177 at Brooklyn’s Barclays Center on Sunday, came in droves to watch four 3-on-3 half-court contests played by former NBA players and legends, coached by basketball icons and luminaries in their own right.

Games will be played on Sundays over the next eight weeks before the semifinals in Seattle and the final in Las Vegas on Aug. 26 — the same day and venue as the scheduled Floyd Mayweather-Conor McGregor fight — on Fox. Fox Sports 1 will televise every match on Monday nights, a problem we’ll get into in a second, called by Gus Johnson, Jim Jackson and Michael Rapaport.

The Big 3, founded by Ice Cube, is different from traditional basketball in numerous ways. The first team to 60 points wins, with halftime commencing after one team gets to 30. There are 14-second shot clocks, rather than the traditional 24. On shooting fouls, one team gets one free throw worth two points and the ball, and, most importantly, there are marked spots on the court for a four-point shot. There are no personal fouls, only team fouls, and each team is allowed five fouls per half before going into the penalty.

NOTE: The rest of this column will feature spoilers from the first week of action, which airs Monday night on FS1, more than 24 hours after the live games are actually played.

This is going to be a big problem throughout the season.

An event like the Big 3, which features a lot of big names and celebrities and NBA players — Whoopi Goldberg, James Harden, LL Cool J, Paul Pierce and Jalen Rose were in the stands — was featured heavily on social media on Sunday. That’s going to inevitably spoil the results for a portion of the potential TV audience. There’s a Big 3 fantasy league, and if lineups don’t have to be set until the games begin Mondays on FS1, fantasy players could know the results in advance. Imagine if fantasy football worked that way.

One reason why FS1 chose to have these games on an NBC Olympics-like delay could be the length of the event. It took more than five hours to finish the four games, and many fans left during or after the third game, which ended about four-and-a-half hours after the 1 p.m. scheduled tip-off. Shortening the event is something that needs to be implemented, or at least considered, to ensure a better live experience.

The Big 3 features eight teams, but Hall Of Famer Allen Iverson was the main attraction. The captain, coach and star of 3’s Company was introduced for the third game to an enormous ovation, and fans chanted “we want AI,” when he took himself out of the game for a first half breather. Then it turned out that The Answer played extremely poorly, scoring just two points on 1-of-6 shooting. Though his team defeated the Brian Scalabrine-led Ball Hogs, the league’s main attraction laid an egg in its opening event, which has to be severely disappointing to Big 3 brass.

Lewis hit the first four-point shot, and Bibby nailed a pair of fours to put the Ghost Ballers back in the game. Earlier on, Williams left the game with a knee injury and reportedly may not return this season. Lewis and Gus Johnson noted how physical the game was compared to the NBA, and it got slow at times.

A really good aspect of the Big 3 is that since the game is untimed, pickup-style, every game will end on a game-winning bucket. The crowd got really into the opening game towards the end when it got close, and erupted when Lewis hit the game-winning foul shot.

“I’m surprised that many people were in the stands, especially for the first game,” Lewis told The Comeback. “It’s like the first day of school, we have to adjust to the physicality of it.”

Lewis thought the referees could have controlled the game better, but he said that will likely improve over time, especially since there was no preseason for everyone to begin to get acclimated.

“You most definitely get tired because guys are leaning on each other, reaching around, boxing out,” Lewis said. “That wears on you, especially as the game goes on.”

Lewis said that Williams’ injury was just a freak accident, but the advanced age of some of these players — Tri State’s Xavier Silas is the youngest player at age 29 — could potentially lead to more injuries, an important factor if each team only has five players.

A crucial factor that’s going to keep fans tuned into games is the four-point shot, which ensures that teams could quickly come back in games if played correctly (the four-pointer is going to be heavily marketed, and numerous fans had “Shoot The Four” t-shirts in the arena). But games are often too slow and plodding, getting bogged down by the physicality and the fatigue, leaving fans longing and yearning for the fast-paced, free-flowing athletic artistry of the Warriors-Cavs NBA Finals.

The Big 3 has a lot going for it, including big name players and coaches like Julius Erving, Chauncey Billups, Rick Barry, Clyde Drexler and Jermaine O’Neal. But there are lot of tweaks and adjustments that need to be made for the Big 3 to be legitimate sports league, and not a novelty summer sideshow.