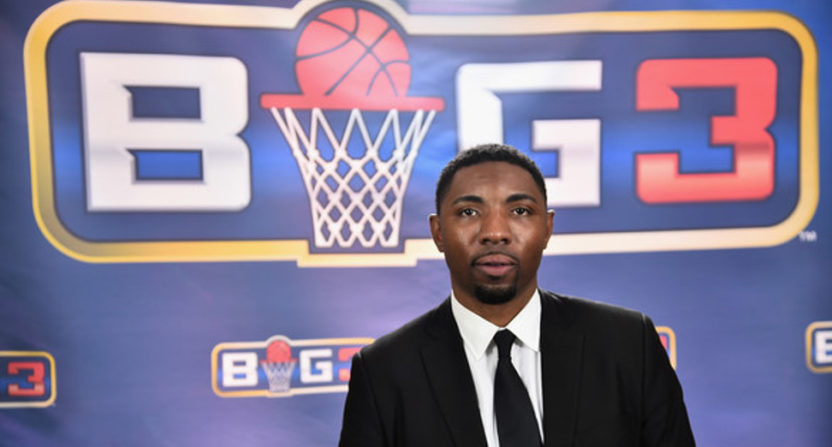 Monday was a bizarre day of developments around three-on-three basketball league BIG3. CEO Roger Mason Jr., the former NBA player and NBPA deputy executive director, was fired for cause, with a letter sent to players, coaches and staff claiming that Mason brought in Qatari investors who then paid certain executives (including Mason) instead of the league itself. League founder Ice Cube will take over as the interim CEO while the BIG3 searches for a replacement. But Mason challenged the league’s claims in a statement issued Monday night:

“I was terminated by BIG3 in retaliation for legal claims which I made last week in a letter sent by my attorneys to BIG3 Basketball alleging that the league had breached my employment agreement,” Mason said in the statement.

“The violations of my agreement centered around BIG3 co-founder Jeff Kwatinetz, who has been engaged in a malicious, defamatory campaign of disparaging me in an attempt to prevent me from the performance of contractual duties and responsibilities.”

Mason, 37, then accused Kwatinetz of making “countless unfounded attacks on (his) integrity, character, and leadership” and painted a broader picture of a toxic work culture.

“The work environment at BIG3 has been hostile and racist, resulting in the departure of valuable league personnel. Among other matters, a former employee of BIG3 recently told me that Kwatinetz has repeatedly referred to black athletes as ‘rich n——.'”

That’s certainly a significant allegation, but there are major claims being lobbed on both sides. For their part, the BIG3 claims that Mason was taking bribes from these Qatari investors:

The letter details a corruption investigation involving Mason and his ties to two Qatari investors who allegedly stiffed the league out of millions of dollars … investors that Mason brought to the league in the first place.

BIG3 sued the investors Ayman Sabi and Ahmed Al-Rumaihi — but Mason allegedly refused to cooperate with the league because of his personal relationship with the men.

The league says Mason had an obligation to side with BIG3 due to his role as Commish.

One of the problems, the league says it found evidence the Qataris were showering certain BIG3 employees with gifts and vacations while refusing to pay the league. The insinuation is that Mason was one of the beneficiaries and it corrupted his ability to effectively run the league.

And as per these specific allegations, a league spokesperson told TMZ “Mason’s claims do not require a dignified response beyond the fact that they are preposterous and false.”

We’ll see how this all pans out, but it’s certainly shaping up to be a nasty public fight. And that could overshadow the BIG3’s preparations for a second season, especially if Mason has anything to back up his claims against Kwatinetz. A whole lot of players might be less willing to compete in the league if the co-founder is making those kinds of statements.