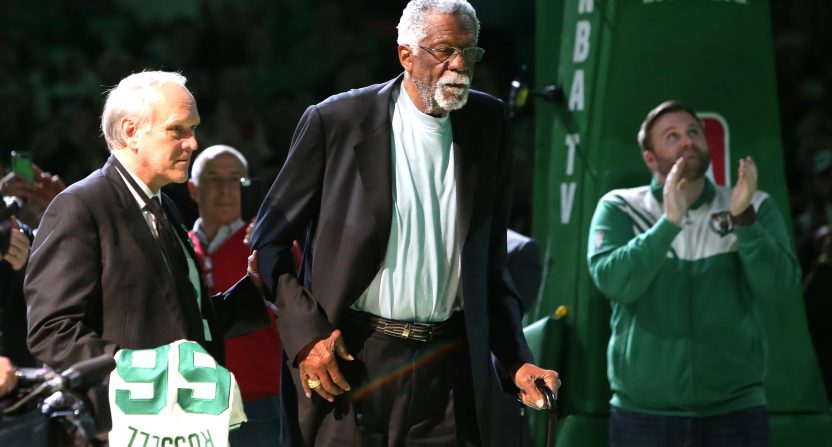 NBA legend Bill Russell passed away a few weeks ago and the NBA has now decided to honor the 11-time league champion in a pretty fantastic way.

Per The Athletic’s Shams Charania, the NBA will retire No. 6 league-wide moving forward to honor the Boston Celtics legend.

The NBA will retire the No. 6 league-wide honoring the late, legendary player and activist Bill Russell.

Russell’s impact on the NBA went far beyond his playing days, though those were pretty impressive too. He won 11 championship rings, including eight consecutive titles, with the Celtics. And although Russell never won a Finals MVP (since the award wasn’t handed out until 1969), the accolade was later named in honor of the legendary big man. Winner of five NBA Most Valuable Player awards, 12 NBA All-Star selections, and 11 All-NBA Team honors, Russell was also a Civil Rights pioneer off the court and a strong voice for the league and social justice in the decades that followed.

“Bill Russell’s unparalleled success on the court and pioneering civil rights activism deserve to be honored in a unique and historic way,” said NBA Commissioner Adam Silver in a league statement.  “Permanently retiring his No. 6 across every NBA team ensures that Bill’s transcendent career will always be recognized.”

The immediate question that many people had was what happens to those who currently wear No. 6 in the NBA. Specifically, how would that impact Los Angeles Lakers superstar LeBron James, who switched from No. 23 to No. 6 a few years back in order to differentiate himself from Michael Jordan?

Turns out, anyone currently wearing the number will be grandfathered in and allowed to continue wearing it for the duration of their career.

Players who currently wear No. 6 – such as Lakers‘ LeBron James – will be grandfathered. https://t.co/bhNSldVKz0

The NBA said that along with the number retirement, it will also pay tribute to the Celtics legend by having all NBA players wear a commemorative patch on their jerseys while every NBA court will display a clover-shaped logo with the No. 6 on the sideline.

News of the honor was met with some high praise and strong reactions from the NBA world.

Make a Bill Russell day where everybody wears 6 just like MLB does for Jackie. https://t.co/9dbhSTQGn6

This is great… Wish they'd done it while he was alive so he could appreciate it. But this is very well deserved https://t.co/2VfkTmhcmM

The only correct move. https://t.co/fe1e1KycdZ

The only correct move. https://t.co/fe1e1KycdZ

Release says players currently wearing No. 6 won't be made to change (e.g. Alex Caruso). But it will never be issued by a team again https://t.co/WR6uYGcGRd

Russell joins Jackie Robinson and Wayne Gretzky as the only athletes in the four major North American pro sports leagues to have their numbers retired league-wide.