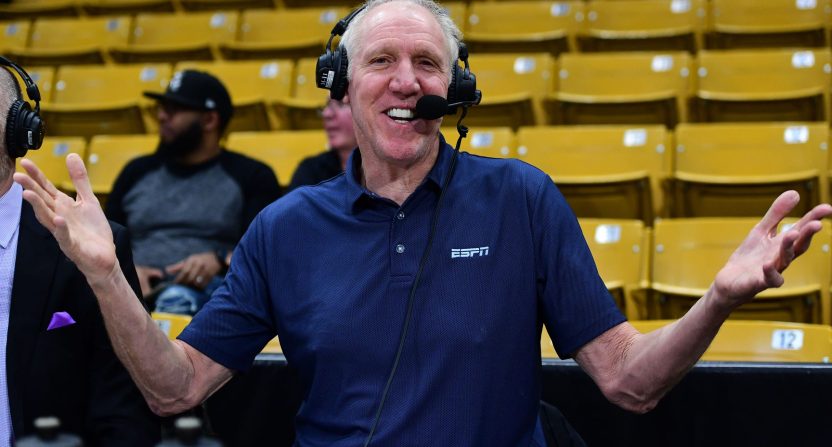 No matter where you are on the U.S. West Coast, major cities are grappling with what to do about the homelessness issue. From Seattle to Portland to San Francisco to San Diego, a major uptick in homelessness and homeless camps has strained resources, pushed city leaders to find equitable solutions, and angered residents who want to see change. You can count NBA legend Bill Walton among those fed up with a lack of local government accountability over the issue.

Per Voice of San Diego, Walton has spent the last few weeks emailing Mayor Todd Gloria emails about the homeless crisis in San Diego. As one of the city’s most popular and highly visible residents,  his comments would presumably stand out from the crowd. However, the emails have gone unanswered, which is perhaps what caused them to become public in a very different way.

“you have failed, us and yourself,” he wrote in one, Sept. 2, in a lower-case spoken-word style. He complained of bad personal encounters he had.

“once again, while peacefully riding my bike early this Sunday morning in Balboa Park, I was threatened, chased, and assaulted by the homeless population, in our Park,” he wrote Aug. 28.

“once again, you’ve done, and continue to do, nothing.”

Walton is clearly frustrated in his emails and has lost patience with the city over an acceptable solution to the crisis.

“you speak of the rights of the homes, what about our rights, we follow the rules of a functioning society, why are others allowed to disregard those rules,” Walton wrote, Aug. 24. “your lack of action is unacceptable, as is the conduct of the homeless population.”

Walton, whose net worth is estimated at $20-25 million, never says in the emails what, exactly, he wants to see the city do. Voice of San Diego notes that he mentions that Los Angeles recently passed that prohibits encampments near schools.

Walton also started tweeting out his sentiments as well.

sadly & with a broken heart, I can no longer say that my hometown of San Diego, is the greatest place in the world, or that it is a safe, healthy, clean & beautiful place, @ToddGloria — we must fix our homeless crisis, we need engagement, rehabilitation, and constant enforcement, pic.twitter.com/oBWQQzKXQ0

The mayor’s office did respond to the newspaper when contacted about Walton’s comments.

The mayor’s staff sent over a long response meant to convey they got it – “Bill’s frustration over our homelessness crisis is shared by people across our city, including the mayor himself, and in cities across the United States,” wrote Rachel Laing, the director of communications for the mayor.

“As Voice of San Diego has covered, people living on the streets since the pandemic seem to be in worse straits than ever, with more behavioral health and substance abuse issues than we’ve seen prior to the pandemic. In our efforts to address the neighborhood impacts of homelessness – particularly encampments and the trash and unsanitary conditions that result from them – our crews are finding an increase in hoarding behaviors and anti-social behavior such as vandalism and unwillingness to put trash in available nearby receptacles.”

It’s easy to say that Walton is wrong for devaluing the situation that homeless people are in, and it’s easy to say that Walton is right and that the homeless should be shipped out of town to…wherever. Somewhere in the middle is an honest and ongoing conversation that many major cities are having about what to do about this complicated issue. But in the meantime, Walton’s involvement in the story leads to some reactions from the sports world that he’s normally associated with.

Just going to reiterate that this is a significant thing for the most prominent booster of San Diego to say. https://t.co/tzoJGNXWkX

Homelessness is such a severe problem. It is not a San Diego issue, it is a National crisis. If there were easy solutions, the problem would be solved. I feel for the homeless, but am clueless how to best help them. https://t.co/VoVyOR4quI

Sadly & with a broken heart, Bill Walton sucks. He doesn’t like seeing homelessness but has 0 empathy for people experiencing it. This tweet says: “I don’t care if people are suffering and living in squalor, I just don’t want to see it”

bill, would your friends in the grateful dead want "constant enforcement" https://t.co/vb5aOQpzyQ