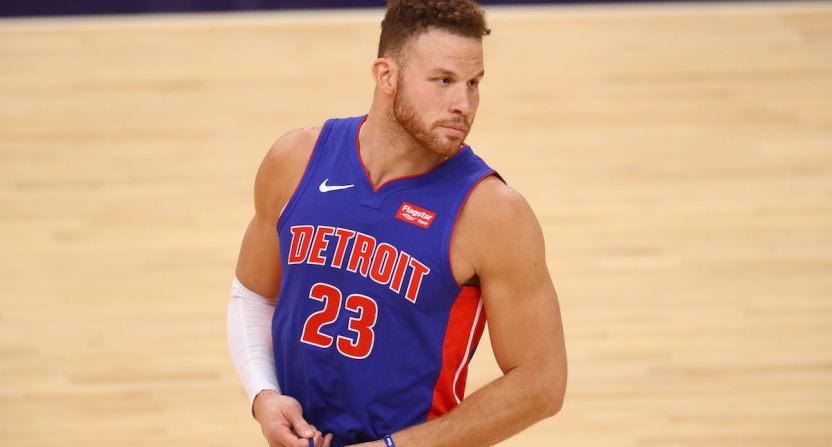 Blake Griffin’s time with the Detroit Pistons has officially come to an end with the two sides agreeing on a buyout, making the 12-year NBA veteran an unrestricted free agent. The news was first reported by ESPN’s Adrian Wojnarowski, but terms of the buyout were not revealed.

Griffin, 31, had been out of the Pistons’ lineup since mid-February with the understanding that he wouldn’t play as the team attempted to trade him. If a trade partner couldn’t be found, Detroit would negotiate a buyout on the remainder of his contract, set to pay him nearly $57 million through the 2021-22 season.

That massive financial obligation for a player who’s no longer a superstar made a trade highly unlikely and any team interested in Griffin was going to wait for a buyout. According to Wojnarowski, the Miami Heat, Portland Trail Blazers, and Golden State Warriors are among the teams expected to pursue Griffin now that he’s available. The New York Times‘ Marc Stein added the Los Angeles Lakers, Clippers, and Boston Celtics to that list.

But The Athletic’s Shams Charania and James Edwards III report that Griffin will likely sign with the Brooklyn Nets.

The Brooklyn Nets are believed to be leaders to sign six-time All-Star Blake Griffin, sources tell me and @JLEdwardsIII. Rival teams with interest are expecting Griffin to choose Nets as a title favorite for chance to win a championship.

The Pistons have the second-worst record in the NBA going into the All-Star break at 10-26. Currently undergoing a rebuild under first-year general manager Troy Weaver, Griffin had a diminishing role amid a roster built around free-agent addition Jerami Grant and developing players such as rookies Saddiq Bey and Isaiah Stewart.

In 20 games this season, Griffin averaged a career-low 12.3 points per game, along with 5.2 rebounds and 3.9 assists. Once an explosive dunker who was a regular in NBA highlights, Griffin barely attacks the rim anymore while trying to re-invent himself as a jump-shooting wing. Yet his 32 percent shooting from three-point range shows that he hasn’t successfully made that transition.

Once a superstar with the Los Angeles Clippers, who selected him No. 1 overall in the 2009 NBA Draft, and one of the highest-profile players in the NBA, Griffin became far less relevant after being traded to the Pistons in 2018 for a package including Tobias Harris, Avery Bradley, Boban Marjanović, and a first-round draft pick (eventually selecting Miles Bridges).

It was a shocking transaction, following what appeared to be a major investment in Griffin by the Clippers with a five-year, $173 million contract. The team’s pitch for signing a new contract included telling Griffin he would be a “lifelong Clipper,” showing they intended to retire his jersey, and considered him among cultural icons like Muhammad Ali, Nelson Mandela, and Martin Luther King Jr.

Ah, man — I TOTALLY forgot the Clippers made these shirts for Blake's FA pitch. We should've seen this coming. pic.twitter.com/C2RPBmoLgI

Less than a year later, however, Griffin was dispatched to Detroit in an apparent attempt by the Clippers to shake up an underperforming Western Conference playoff contender and clear a major piece of payroll from their salary cap.

For the Pistons, Griffin was a recognizable star who could generate buzz for a dormant franchise that had become insignificant in the NBA and Detroit sports scenes. Additionally, the team had moved into a new downtown arena and wasn’t drawing many fans. Owner Tom Gores and coach Stan Van Gundy (who was also president of basketball operations) thought a bold move could change that.

Despite averaging nearly 20 points, seven rebounds, and six assists per game, Griffin couldn’t boost Detroit into the playoffs. The Pistons compiled a 17-17 record after Griffin’s arrival, finishing ninth in the Eastern Conference standings, and Van Gundy was fired after the season.

Related: Blake Griffin is what he is, and that’s not good enough to save the Pistons

Griffin lifted the Pistons into the playoffs the following season under new coach Dwane Casey. In 75 games, his highest total in seven seasons, the forward averaged 24.5 points, 7.5 rebounds, and 5.4 assists while Detroit finished 41-41 and earned the No. 8 seed. But Griffin and his left knee broke down under the heavy workload. He only played two games in a four-game sweep versus the Milwaukee Bucks.

That knee injury plagued Griffin for the rest of his stay with Detroit, robbing him of his explosiveness and limiting him to only 18 games in a COVID-shortened 2019-20 season.

The Pistons are moving on with some encouraging young talent and figure to add even more with a lottery pick in this year’s NBA Draft. Now that Griffin is leaving Detroit, it’s clear that the Clippers made out better from that blockbuster trade. The Pistons learned the hard way that a playoff contender can’t be built with shortcuts.

But Griffin still has a chance at a happy ending with an opportunity to join a playoff contender now. He says he wants to play five more years. Maybe he’ll land with a team that could face the Clippers in the postseason, bringing this story full circle.