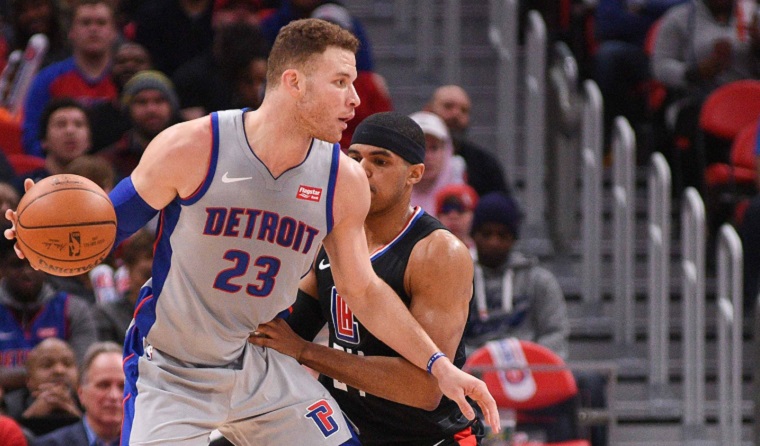 If there were any questions as to whether or not Blake Griffin and the Los Angeles Clippers were on good terms following his trade to the Detroit Pistons, Friday night’s matchup between the two teams probably answered them.

Facing his former team for the first time since the Clippers traded him to Detroit on Jan. 29, Griffin may have been a bit preoccupied or focused on trying to make a statement. He scored only 18 points, hitting 7-of-19 shots, including 1-for-7 from three-point range. It was Griffin’s second-lowest scoring output and shooting performance since joining the Pistons.

When it came to interacting with his former teammates, Griffin didn’t have much to offer before and after the game either, opting not to shake hands with anyone on the Clippers’ side. Earlier in the day, he told ESPN that the Clippers were “just another team we’re trying to beat,” which certainly sounds like a good company line with your new team. But Griffin would have to be some kind of robot not to have some feelings about opposing the only other team he’d played for in the NBA, the uniform he’d worn for nearly eight seasons.

Yet getting traded after being told he was the face of the franchise and watching a team that was once positioned as an NBA title contender apparently allowed Griffin to compartmentalize any sentiment he may have held. At least that’s how he made it sound to the Los Angeles Times‘ Broderick Turner:

“At the end of the day, there’s really just one guy there [from] when I first got there,” Griffin said, referring to the eight-plus years he played with DeAndre Jordan. “At the start of the season, we had nine new guys. Organizational, yeah, I was there for nine years. But those guys on the court are not quite the same when it’s a lot of new guys. But, still, it’s a team I’m familiar with. It was a little weird. It’s the first time I’ve ever done something like that. So, it’s out of the way. Move on.”

Comparing regular jobs to playing sports professionally doesn’t often lead to many similarities, but many people can surely relate to cutting off any sentimentality toward a job and quickly pushing it into memory after being let go or quitting. Dwelling on the past doesn’t do much good, especially if there’s new work and responsibilities at hand that need to be addressed immediately.

In Griffin’s case, that was probably easier 2,300 miles away from his old team. But that distance closed pretty quickly less than two weeks after being dealt and only five games into his Pistons career. It probably stings a bit that Griffin’s first loss with Detroit was to his former team — and on his new home court. But the Clippers had plenty of guys who also wanted to make a statement in playing their former team, namely the three players traded by Detroit (along with a first- and second-round pick). Tobias Harris said as much to Turner after the game:

“It’s like seeing your ex-girlfriend for the first time with a new man and you got a new girl,” Harris said. “Of course we want to win. That was the biggest thing. A lot was put into the trade, this game, so wanted to come out here and handle our business.”

Harris had 12 points Friday night, with Avery Bradley adding 10 points for the Clippers. Bradley also got into a little tiff with Griffin early in the game.

Up next, everybody presumably moves on. The Clippers play Saturday night at Philadelphia, while the Pistons travel to Atlanta for a Sunday matinee.