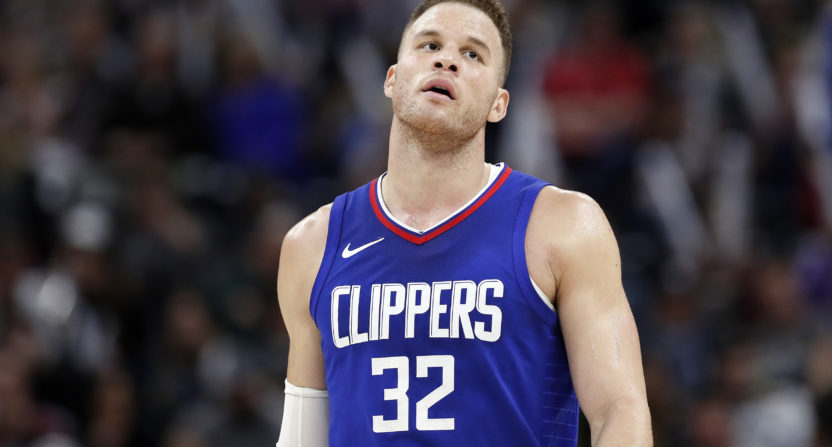 In a surprise deal, the Los Angeles Clippers are sending Blake Griffin to the Detroit Pistons.

NBA Twitter lit up after a Woj bomb on the subject:

The Clippers and Pistons are engaged in serious talks on a deal centered on All-Star forward Blake Griffin, league sources tell ESPN.

The Ringer’s Kevin O’Connor chimed in with a potential outline:

The deal I heard that's being discussed is Blake Griffin for Avery Bradley, Tobias Harris, Boban Marjanovic, and a first-round pick. https://t.co/D9Um2s2fLe

Then Woj confirmed the deal, with the details:

The Clippers have agreed to a deal to send Blake Griffin to the Detroit Pistons, league sources tell ESPN.

The Clippers and Pistons have agreed on a deal to trade Blake Griffin for Tobias Harris, Avery Bradley, Boban Marjanovic, a first-round and a second-round draft pick, league sources tell ESPN.

The deal means a fascinating frontcourt for the Pistons; Drummond and Griffin are both under contract through 2020, and will take up a big portion of the cap until then. It also leaves Detroit thin on the wings, but considering their current roster sits 3 games out of the final playoff spot in the East, Stan Van Gundy was willing to shake things up for both the short-term and long-term.

Getting two potential star players (if Drummond’s first-half play holds up) to Detroit is a big win for the Pistons, but only if they can maximize their talents. As for the Clippers, this means the end of their competitive run, although that was probably over as soon as Chris Paul went to Houston. The return is solid, but if the Clips are building for the future, it would almost make more sense to include a few of those pieces in a potential DeAndre Jordan trade with Cleveland; there’s no point half-assing a rebuild during the prime of this Warriors run in the West, anyway.

Whether that’s what happens remains to be seen, but if the Clippers do decide to tear down, they have some of the best pieces on the trade market (we haven’t even gotten to Lou Williams.)

But hey, Blake Griffin is a Piston now! That’s really weird, right? Not quite as weird as the NBA transaction market heating up before MLB’s offseason, but still!