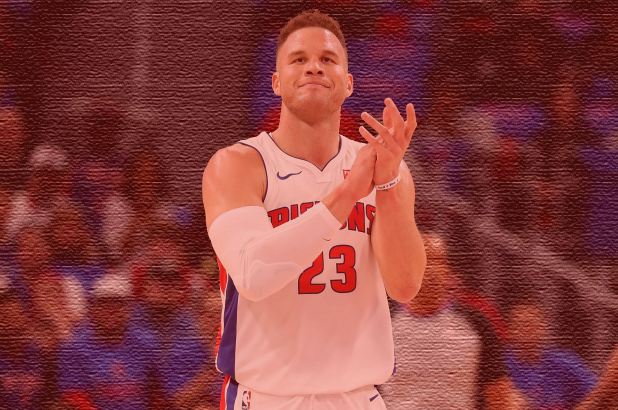 On March 13, the Detroit Pistons were in the midst of a 31-point blowout against the Utah Jazz. On the verge of dipping seven games under .500, Blake Griffin sat on the bench after an abysmal game, shooting 5-for-16 and scoring 13 points in 28 minutes. After making one of the biggest, riskiest trades just over a month and a half ago, it’s clear the Pistons are in worst-case scenario mode.

Jan. 30 was a big day for Pistons head coach/president Stan Van Gundy. With just over a week until the NBA trade deadline and his team on the fringe of the Eastern Conference playoff hunt, SVG shocked the league by acquiring five-time All-Star Griffin in a deal with the Los Angeles Clippers. In exchange, Detroit traded three rotation pieces — Tobias Harris, Avery Bradley and Boban Marjonavic — a 2018 first-round pick and a 2019 second-round pick.

Griffin, a former high-flyer who was promised the world by the Clippers and dealt one season after signing a mammoth five-year, $174 million deal, gave Van Gundy what he likely thought was his first true superstar in his four years in Detroit — albeit one with plenty of baggage.

Unquestionably, bringing in Griffin was a bold, potentially fortune-changing move. Griffin at his heights he was an offensive dynamo. The 2009 No. 1 overall pick’s highlight reel is impressive, but his on-court production has been severely hampered in recent years by injuries. Griffin has shown flashes of his former All-Star self, but has missed more than 100 games since the 2014-15 season. This season, he missed a month with a sprained MCL in November. Once a supremely athletic big, the power forward has lost his once non-stop ability as the injuries piled up.

Sadly, after just 21 games with the Pistons, it’s clear: The panic move designed to keep Detroit’s playoff hopes alive and Van Gundy from the firing squad has backfired.

In Griffin’s case, expectations couldn’t meet reality. From the get-go, he was an odd-fit in Detroit.

Going from playing alongside one traditional center in DeAndre Jordan to another in Andre Drummond prevented Griffin from playing at the five. Seeing the 6-foot-10 former dunk champion get some run with a more stretched out lineup would have been a lot of fun. Unfortunately, that’s not how Van Gundy built his offense.

Despite the small 21-game sample size in Detroit, Griffin is nearing career-low numbers across the board, averaging just 20.2 points on 17.3 shots per game. Worst of all, he’s shooting 42 percent while pulling in just 6.6 boards per game.

Griffin remains a good jump-shooter and his three-point range has improved late in his career, but he has relied much more on that aspect of his game to a fault. In 2013-14, Griffin took nearly 60 percent of his shots from 10 feet or closer. In 2017-18, that’s down to 49.5 percent. In his last 15 games, it’s 40.9 percent. Part of his shot selection change over the years is due to the spaced-out modern NBA, but Griffin’s tendency to pull up instead of taking the ball to the hoop has hampered his effectiveness.

To be fair to Griffin, he’s found his mojo in recent games, averaging 22.7-6-6 over his last nine games. He’s still a capable scorer who can spread the floor and provide spurts of his old self. But it’s pretty clear that the Griffin who showed multiple red flags in L.A is the same one the Pistons received.

Griffin’s up-and-down shooting and odd fit wouldn’t be so hard to swallow if the players traded for him weren’t more effective, cheaper and younger. Tobias Harris is putting up comparable numbers, but doing it at a much more efficient rate as the Clippers unexpectedly battle for the eight-spot in the West. It’s fair to argue the Pistons would be in better shape now without making the deal — at the very least, financially.

Barring a late-season miracle, Griffin and the 31-39 Pistons (six games behind the eight-seed Milwaukee Bucks) are going to miss the playoffs for the second straight season.

So where does that leave Detroit going forward? Going all-in on Griffin puts the Pistons in a precarious position.

Griffin’s contract increases from $29 million in 2017-18 to $38 million by 2021-22. If he’s starting to show mileage already, imagine what he’s going to look like four years from now as one of the highest-paid players in the NBA? It’s scary — and not good scary.

In the short term, Van Gundy has built a roster that still doesn’t have a star player and one with little wiggle room. The biggest contract coming off the books in 2018 is Anthony Tolliver’s $3.2 million deal. Next season, Detroit will owe more than $20 million to Jon Leuer, Langston Galloway and the long-departed Josh Smith (via the Stretch provision). That’s too much cash for replaceable depth. Add in Griffin’s contract and the still more than $35 million owed to the effective, but oft-injured point guard Reggie Jackson and the cap situation is dire. Griffin’s contract is as unmovable as it gets.

Pistons owner Tom Gores needs to follow a page from Clippers owner Steve Ballmer, take roster responsibility from Van Gundy and bring in a young, cap-smart general manager to fix this mess. Van Gundy is a great coach, but his moves as a GM in Detroit have hurt more than helped. Let someone else call the shots and build the necessary spacing around Griffin in order to readjust to what he is now. The contract hurts, but Griffin is an above-average player who still can help.

For now, Van Gundy and Pistons ownership need to hope that Griffin can A) stay healthy and B) stop declining. Considering both are unlikely at this point, the Griffin-to-Detroit deal is an all-time panic move that backfired tremendously on Van Gundy. It’s rare for a trade to hurt the team in the present and the future. Unfortunately for Detroit, getting Griffin from the Clippers has done exactly that.