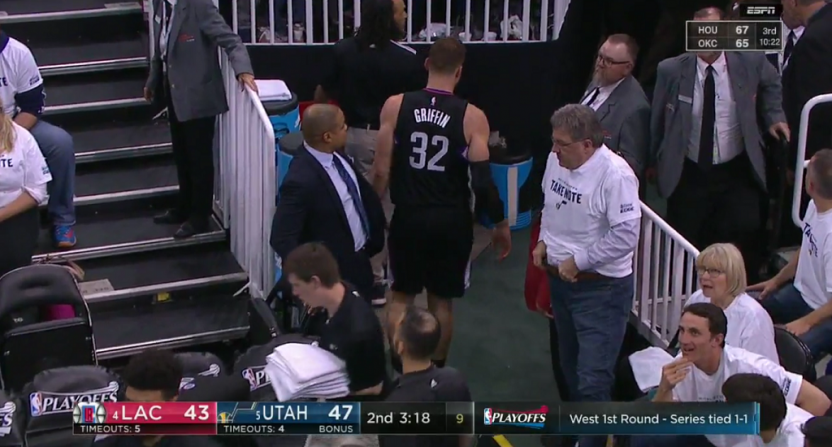 Well, this is unfortunate news for the Clippers.

After suffering a toe injury during last night’s riveting game 3 win over the Utah Jazz, Griffin was expected to perhaps miss another game or two, even the remainder of the series. But today’s news is much worse:

As the Clippers release notes, Griffin had averaged 25 points in the first two games of the series. The injury appeared to happen on this play, as Griffin drove the lane for a layup:

With Griffin officially ruled out, the tenor of the series changes entirely, even though the Jazz are down 2-1. The Clippers, not a deep team to begin with, are going to be forced to play smaller, and Chris Paul is going to be tasked with even more of a load than normal. (And normally it’s a lot.)

Paul was able to orchestrate last night’s win via perfect pick-and-roll reads and plays down the stretch; combined with solid team defense that prevented Gordon Hayward from having a fourth quarter impact, and they got the win without Blake. But one game is one game, and even if the Clippers do somehow take the series, it’s difficult to imagine them having any kind of success against the Warriors.

The Jazz, meanwhile, get new life; it was obvious from the atmosphere last night how excited Salt Lake City is to have an honest-to-goodness (their phrasing, probably) playoff team again. They likely don’t have the firepower to threaten Golden State either, but just winning a series and getting that kind of experience, on that stage, would be a big deal for Utah.

It’s a tough blow for Griffin, too; the big man has had a career full of tough injury news, having not played more than 67 games since 2014. He only played in 61 this year, but he’d likely trade most of those for a healthy playoff run.

Instead, once again, Chris Paul will be tasked with leading an undermanned team, and if they don’t manage to get out of the first round, he’ll likely bear the brunt of the backlash. This could even be the end of this particular iteration of the Clippers, although it’s difficult to guess what Doc Rivers will do.