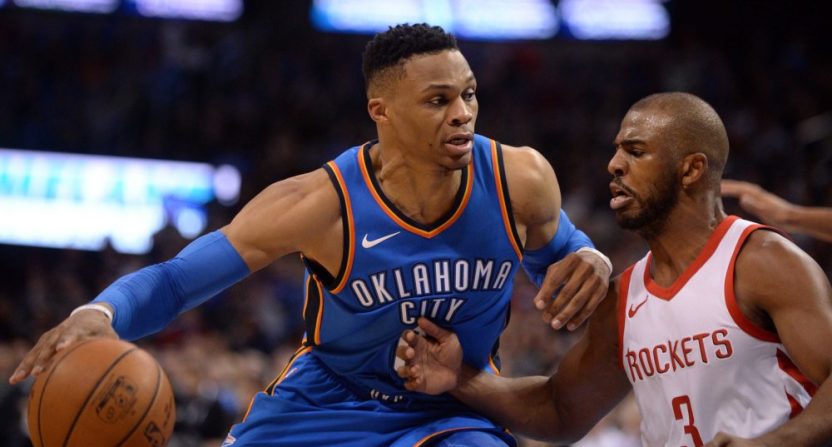 After the Oklahoma City Thunder traded Paul George to the Los Angeles Clippers last week (where George joins Kawhi Leonard), it appeared to be a matter of when, not if the Thunder would also deal Russell Westbrook.

And on Thursday, the Thunder indeed traded Westbrook… for another star veteran point guard in Chris Paul. Yes, Westbrook is going to the Houston Rockets, where he reunites with former Thunder guard James Harden. The Thunder also get Houston’s first-round picks in 2024 and 2026, along with pick swaps in 2021 and 2025.

The Oklahoma City Thunder have agreed to trade Russell Westbrook to the Houston Rockets for Chris Paul, first-round picks in 2024 and 2026, pick swaps in 2021 and 2025, league sources tell ESPN.

Oklahoma City GM Sam Presti worked with Westbrook and his agent, Thad Foucher, to deliver the former MVP to his preferred destination: A reunion with James Harden, per sources.

The Rockets were Westbrook’s preferred destination basically from the beginning of this process. Other teams were only lightly considered.

And the Thunder have now added eight (!) first-round picks since draft night.

So, wow. There’s so much to unpack here, and we’ll just get to the basics on what it means to each team.

For the Rockets, they clearly feel they can make a championship run with a team featuring Westbrook and Harden in the backcourt. The Warriors will no longer be the Warriors team we’re used to- Kevin Durant is now in Brooklyn and Klay Thompson has a torn ACL. The Clippers could be a force with Leonard and George, and the same may be true for the Lakers with LeBron James and Anthony Davis now on the same team.

But it remains to be seen just how good the Clippers and Lakers will be with their new stars (and the depth for both squads is in question), and perhaps the Westbrook-Harden tandem can match them.

Westbrook averaged a triple-double, with 22.9 points, 11.1 rebounds, and 10.7 assists per game (first). But these were largely volume stats for Westbrook, rather than efficient stats; his 21.14 PER only ranked 46th in the NBA. Westbrook’s shooting was particularly unimpressive, with a 42.8 field goal percentage, a 29.0 three-point percentage, and a 65.6 free-throw percentage.

Russell Westbrook is the franchise's all-time leader scorer for the Oklahoma City Thunder.

But he struggled shooting last season, according to Second Spectrum, Westbrook shot the 4th lowest percentage of any player that took at least 250 jumpers.

But Westbrook is still extremely explosive and could be lethal alongside Harden, whose game has improved and matured massively since the Thunder days.

The sportsbooks now give the Rockets top-four title odds:

Per @CaesarsPalace sportsbooks' Alan Berg (@PercentBerg), Rockets go from 10/1 to 7/1 to win NBA title in wake of Rockets acquiring Westbrook, sending Paul and future picks to Thunder. Other odds:

As for the Thunder, well, they’re definitely no longer anywhere close to title contenders. With all due respect to CP3 (who’s still a very good point guard at 34), this trade is all about the draft picks.

Thunder were 40/1 to win the title. Now without Paul George & Russell Westbrook, the Thunder are 500/1, fourth worst odds in the league https://t.co/vt5HDNnXsl

Oklahoma City is handling a rebuild exactly as organizations should- admitting the reality of their situation and wasting no time with a full-on rebuild. They’re absolutely loaded with first-round draft picks going forward, and figure to have at least a few of those be lottery picks in the near future thanks to being very bad. With so much star power now at the top of the Western Conference, reloading and being ready to pounce in a few years is what organizations like Oklahoma City should be doing.

The Thunder and general manager Sam Presti are playing the long game, and that will test the patience of fans, but it’s absolutely the right way to go.