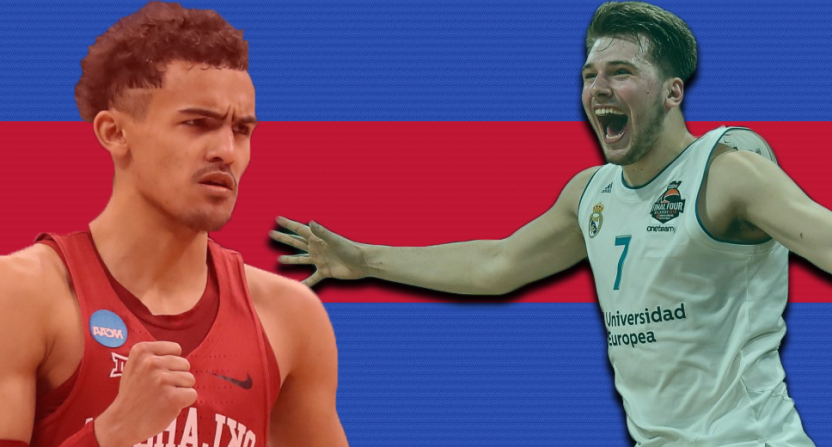 The Dallas Mavericks have completed a trade with the Atlanta Hawks on Thursday night that will see Real Madrid guard Luka Doncic (No. 3 overall) go to the Mavs in exchange for Oklahoma Sooners point guard Trae Young (No. 5 overall) and a future first-round pick.

Rumblings persisted pre-draft the Mavs and Hawks were working on a deal involving the lottery picks and Wes Matthews and Kent Bazemore, but both team’s opted for a deal without any active salary involved.

Doncic instantly gives Dallas another franchise player to pair alongside talented point guard Dennis Smith Jr. Despite being just 19-years-old, Doncic is about as accomplished as a prospect can be. He debuted on Real Madrid’s pro team at 16 and earned multiple honors including becoming the Liga ACB MVP, EuroLeague MVP and EuroLeague champion in 2018.

An accomplished scorer, Doncic possesses tremendous potential. He can shoot, is an above average passer and isn’t a slouch defensively. Doncic’s ability to use his 6-foot-7-inch size to feast on smaller guards makes him a fascinating pairing as the two-guard in Dallas. While he prefers the ball in his hands, he and Smith will make a terrific backcourt pair for years to come. For an organization that was treading the waters of mediocrity after prolonged success, the Mavericks “tankathon” worked. Doncic is the real thing.

Plus, they’ve got the perfect mentor for the youngster.

Atlanta, meanwhile, moves back to take a point guard who was arguably the best scorer in the NCAA last season. In his one-and-done season at Oklahoma, Young averaged a ridiculous 27.4 points per game, shooting 36 percent from deep and averaging the most assists in the nation at 8.7 per game. The 19-year-old’s got Steph Curry-lite range and is a gifted passer. Hurting Young is his diminutive 6’2″ size and his turnover tendency (his 161 turnovers topped the country). It’s a boom-or-bust pick.

Young might start from day one if the Hawks deal starting point guard Dennis Shroeder. For a rebuilding team without a lot of young talent outside forward John Collins, Young adds another dynamic youngster to the roster.

The Hawks also acquired a future first-round pick with various protections over the next five seasons (per Stein). Without knowing what those exact protections are, it’s hard to gauge the total haul for Atlanta. But, you’d think it would be at worse, top-ten protected. Otherwise, it would be an incredibly small price to pay up to grab the third pick.

In the end, both teams got what they wanted from the deal. Dallas ends up with a potential superstar for a small cost of a future protected draft pick. Meanwhile, Atlanta brings in a potentially game-changing (if highly risky) point guard and adds a future asset to continue rebuilding further. Ultimately, the Mavericks come out ahead in this deal, and if Young struggles this could come back to haunt the Hawks. However, if Young’s talents translate to the pro level, he could be the face of the franchise sooner than later.