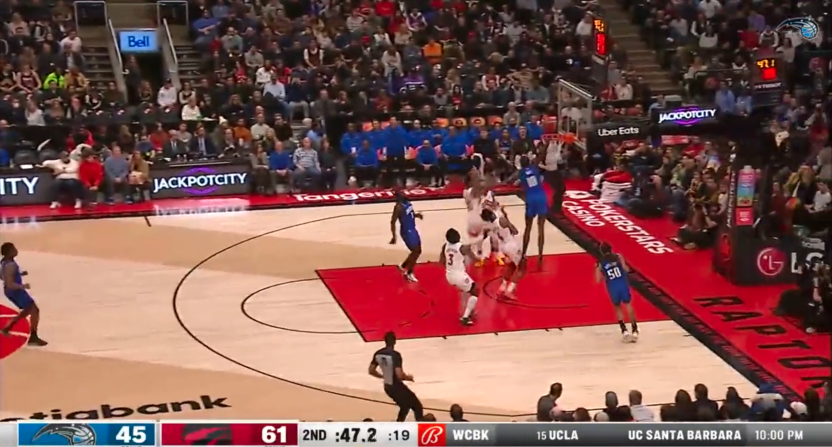 The Orlando Magic have not had much to be pleased about this season, currently sitting as the worst team in the NBA with a 5-19 record on the year. Perhaps the lone bright spot has been the breakout of fourth-year center Bol Bol, who had some eye-popping highlights on Saturday against the Toronto Raptors.

Bol has always been known to have a ton of talent, but has struggled to put everything together in past years.

The Magic’s struggles this year have allowed Bol to get some consistent playing time, and he was impressive on both the offensive and defensive side of the ball on Saturday.

Standing at 7’3, Bol displayed guard-like skills late in the second quarter, grabbing a rebound and going coast-to-coast for a monstrous dunk.

He then displayed his excellent length on the defensive end with an insane chasedown block on a 360 dunk attempt from Raptors forward OG Anunoby.

Bol ultimately finished the game with 18 points, with several other impressive plays throughout the game.

Bol Bol fakes the spin and gets to the rack 💪

All good rook, @BolBol got your back 💪

There has been a ton of hype around NBA Draft prospect Victor Wembanyama as of late due to his freakish athleticism and skills while standing at 7’6.

Bol Bol possesses a lot of similar skills as Wembanyama, and the NBA world is certainly very impressed with what they saw from him on Saturday.

Bol Bol is rocketing up the list of favourite NBAers

Like Dude…. I’m really happy that Bol Bol in a place that’s letting him thrive, Unreal how he’s been playing this season. pic.twitter.com/iXVT5J8Inu

Bol has certainly impressed in his time in Orlando, but some would say that he is recording empty stats on a struggling Magic team at the moment

However, these highlights undoubtedly show that he can be very useful to any team if he is put in the right system.