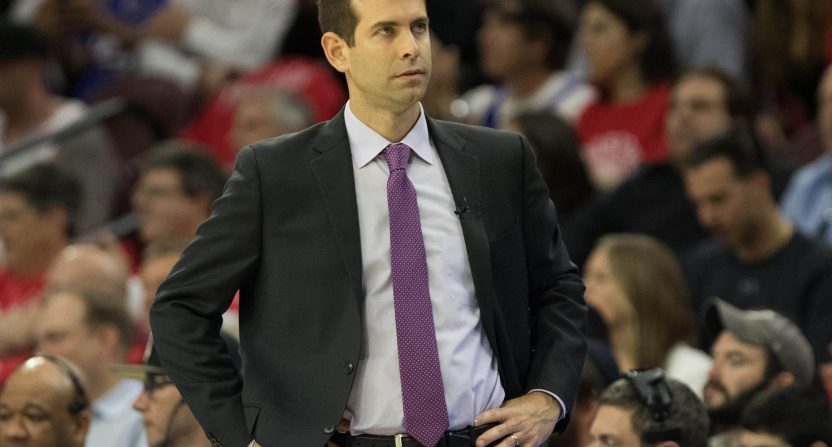 The Boston Celtics are up 1-0 in the Eastern Conference Finals, behind a starting lineup featuring the following players:

It’s not exactly a group you expect to see in the conference finals.

As a result, a lot of the credit for Boston’s success has gone to coach Brad Stevens, the wonderboy who at 41 years old already ranks among the league’s most well-regarded strategists. NBA analysts like to hype up Stevens because, well, the results speak for themselves. Everyone who joins the Celtics seems to play better than he had before, and the team continues to win more games than any reasonable observer would expect. The players speak highly of Stevens’ management style, and his in-game strategy is considered impeccable. There’s just a lot to like.

Stevens, for his part, has deflected all attention. He has declined interviews, downplayed his status relative to other coaches, credited his players even more than the usual coach and actively fought back about any narrative that sought to build him up. Here’s what he had to say Monday, via ESPN:

“It’s silly,” said Stevens. “The praise is uncomfortable, and it’s just something that these guys should be getting it all. We all have a role to play, and we all need to play that role as well as we can.”

Playfully informed that media members could pounce if Stevens made a mistake, Boston’s fifth-year coach responded, “Go for it. That would be great.”

OK Brad, you asked for criticism, here’s some: It’s a bit annoying how modest you’re being. This praise hasn’t simply come from nowhere. You’re getting it because you’ve led your team to the playoffs in three straight seasons, most recently leading an injury-plagued team to 55 wins and a berth in the conference finals. You’re a pretty freaking good coach.

We don’t need Stevens to run around patting himself on his back, telling the world how great he is. But he also doesn’t have to act offended when someone dares suggest he’s effective at his job. It gets tired, you know?

The more games Stevens and the Celtics win, against the Cavs and potentially beyond, the more fans and media will talk about how great Stevens is — and the more they will be correct. At some point, maybe Stevens should just smile and say thank you.