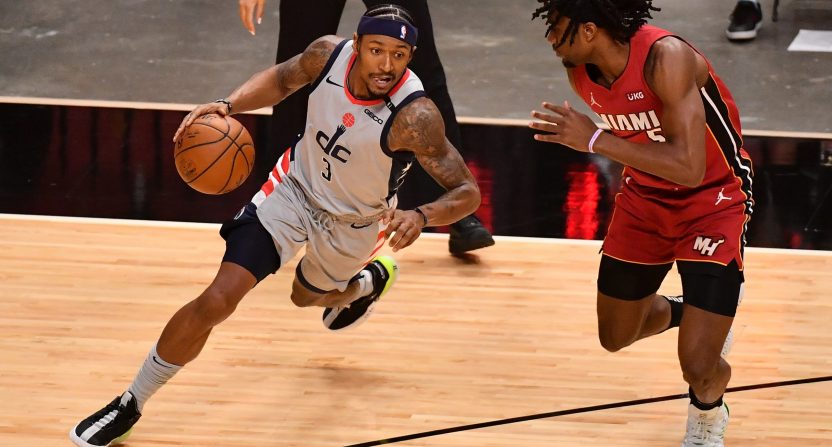 The Washington Wizards got their second win over the last three games on Wednesday night with a 103-100 victory over the Miami Heat (this win followed a very surprising 149-146 win over the Brooklyn Nets on Monday). The mild run at success has improved Washington’s record to… 5-13. And it’s hard to imagine anybody being happier about the victories than Wizards guard Bradley Beal, who has deserved *much* better this season.

Beal scored a game-high 32 points on Wednesday night, in a game which featured no other player scoring more than 20 points.

The 32 points actually lower Beal’s season scoring average from 35.0 points per game to 34.8 points per game. He still leads the NBA in scoring, by a full four points over the second-highest average (Kevin Durant at 30.8).

Beal has scored 25-plus points in all 17 games he’s played this season, which passes some guy named Michael Jordan (1988-89) for the most consecutive games with 25-plus points to start a season since the ABA/NBA merger in 1976-1977. It’s the longest such streak in 50 years.

Bradley Beal (32 PTS tonight) passes Michael Jordan for the most consecutive 25+ point games to start a season since 1976-77. @EliasSports

The longest streak of games with 25+ points to begin a season in @NBA history is 80 by Wilt Chamberlain for the 1961-62 Warriors. Chamberlain scored 26+ points in every Warriors game that season, including his 100-point performance on March 2, 1962.@RealDealBeal23 @WashWizards https://t.co/JYSETzaCOJ

Maybe the most incredible thing about Beal’s scoring is how efficient he’s been while doing it. It hasn’t been a case of tossing up 40 shots and scoring as a result of volume. He’s shooting a career-best 48.5% from the field, a career-best 87.3% from the free-throw line, and is shooting a solid 35.7% from three (his highest mark in the last three seasons). He entered Wednesday eighth in Player Efficiency Rating (PER) at a career-best 26.12, third among guards.

Beal was an All-Star selection in 2018 and 2019, but it appears that the 27-year-old is entering full-on superstar status this season.