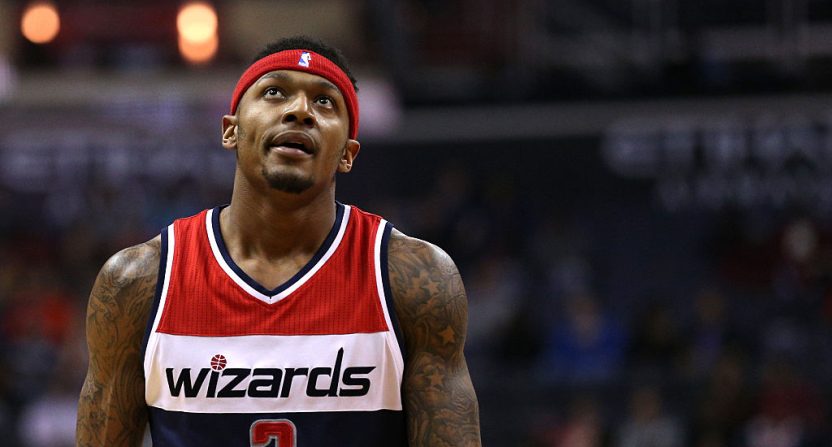 The Washington Wizards (29-20) are the hottest team in the Eastern Conference, with wins in six straight games, and 13 of their last 15.

Thursday night’s 116-110 home win over the Los Angeles Lakers gave the Wizards their 16th straight victory at the Verizon Center, good for their second-highest home winning streak in franchise history.

However, Wizards guard Bradley Beal (who scored 23 points) was unhappy after the game about how loud Lakers fans were in the Wizards’ home arena. Beal called it “terrible” and said he felt like the Wizards “were on the road” (via the Washington Post):

When asked if John Wall’s fourth-quarter takeover (16 points, including eight straight) was spurred by opposing fans who loudly cheered on their Lakers, Beal did not hold back.

Wizards star point guard John Wall (33 points and a 16-point fourth quarter) wasn’t happy about the crowd either, but explained how he understood the Lakers have a huge following, and still called Wizards fans “amazing”:

Wall admitted he wasn’t pleased with the presence of Lakers fans — “No, I wasn’t” — but understood why the franchise still attracts so many fans.

“Our fans were still here, you heard some boos when they were doing that,” Wall said. “But you know, the Lakers are a big-time organization that have won a lot of championships. They have a fan base kind of like the Celtics. They have one of those fan bases, one of those legendary teams, so we understand it. We dealt with it before when Kobe was playing but I’m glad that we have a winning streak here. Our fans have been amazing and they cheer for us when they needed us the most.”

Wall on 4Q fuel: "Hearing the crowd get up and make big Lakers chants just made me mad. I do what I have to do to try and get a win for us."

As Wall said, the Lakers are a huge draw wherever they play, so hopefully that will be the last time for a while that it feels like the Wizards are playing a road game at the Verizon Center. The DC fans should be getting out to see what is arguably the second-best team in the Eastern Conference right now.