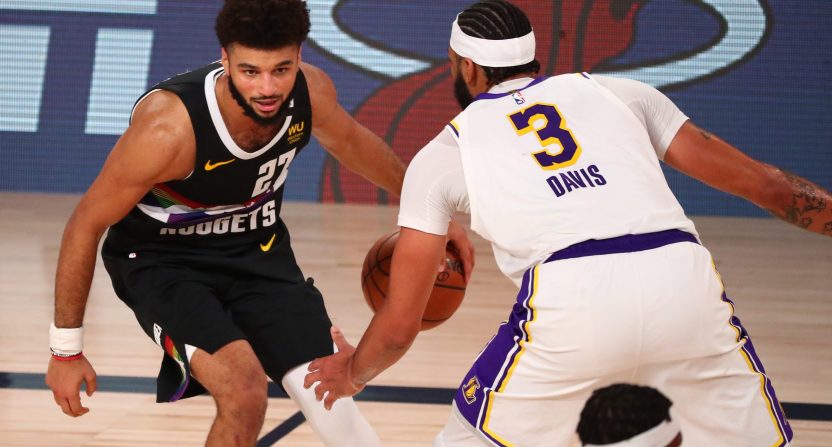 The Denver Nuggets will not go away. In Game 3 of the Western Conference finals against the Los Angeles Lakers (a couple nights after Anthony Davis hit a dagger of a buzzer-beating three-pointer to win Game 2), the Nuggets took an 18-point lead into the fourth quarter and stole a game. Nothing looks guaranteed for Davis and LeBron James.

Circumstances are now set up for Denver to either tie the series at 2-2 or go down 3-1 (Win-win!). They have figured some things out against Frank Vogel’s Lakers. Let’s take a look at what Nuggets did, the issues facing the Lakers, and what it means for Game 4:

Murray was back to his flamethrowing ways in Game 3. He drew comparisons to Steph Curry after lighting the Lakers on fire in clutch time. With the Lakers mounting a furious comeback based around a steal-happy zone defense, Murray made sure that the Nuggets would not be blowing any leads. He put up 10 points on 4-of-5 shooting in the fourth, finishing off a 28-point, 12-assist game.

This three-pointer over Alex Caruso was the dagger:

The Lakers have done well to mitigate the deadly Murray-Nikola Jokic pick-and-roll dance for the most part in this series, but Murray overcame that on this play. After Caruso fought to get back in front of him, Murray pulled off a crafty dribble spin move that won him valuable separation.

Versatility has helped Murray. Earlier in the quarter, he beat Caruso on a pull-up jumper while penetrating on the left:

Murray picked the Lakers apart for most of the game. His 12 assists came from his impressive ability to beat the Lakers’ perimeter defenders at the top of the arc. Caruso, Danny Green, and Kentavious Caldwell-Pope need more organized help to prevent Murray from wading into the Lakers’ defense and forcing difficult rotations.

It didn’t help in Game 3 that the Lakers sleepwalked through portions of the game on defense. They failed to switch off the ball and neglected to play help defense at the rim. A big part of the Lakers’ defensive success is everyone staying active and switching with no hesitation, shutting down shooters and using aggressive double-teams to avoid mismatches. There was less urgency and organization on Tuesday, allowing Murray to find easy passes:

On this play, even disregarding from Rajon Rondo’s weak individual defense, the Lakers didn’t do enough to swarm Murray and cut out passing lanes. Kyle Kuzma didn’t help off of Paul Millsap, and Caruso didn’t make any move toward Michael Porter Jr. to allow Caldwell-Pope to get in front of Murray.

Murray can hit shots from anywhere on the floor. Jokic lurks, ready to bully any defender in the NBA in the post or rip apart disorganized defenses with a pass. The Lakers have to be willing to double-team. They can weaponize their defensive versatility, forcing the ball away from the stars and contesting everything. Davis is an unbelievable disrupter. They have to stay in sync and get more effective on-ball defense from the guards, particularly Green, who’s looking increasingly useless in this series.

Sometimes, Murray will make any attempt futile. You live with that and hope he goes 2-of-9 from three again, like he did in Game 2 (though there were a couple half-court attempts). LA’s defense can be better — and there are lessons to be taken from the success of the zone defense, which we’ll get to.

The Nuggets’ secondary talents hit their catch-and-shoot attempts in Game 3 and were important contributors off the dribble. Jerami Grant was the most notable, scoring 26 points on 7-of-11 from the field and adding nine free throws. When Grant is at his best, he’s attacking disjointed defenses and drawing contact. His shooting (2-of-5 from three) helps too, but Grant can be an offensive asset when he’s driving hard to the rim.

In addition, Porter and Monte Morris had solid games. Morris in particular was very good in 20 minutes, scoring 14 points on 5-of-7 shooting as a plus-10. With Gary Harris still struggling offensively, these auxiliary performances are crucial for Denver.

An interesting rotation note: Mason Plumlee played only four minutes in Game 3, and with Jokic playing 37, that left Denver running about six minutes without a center on the floor. During that time, which came mostly in a stretch from late in the third quarter until early in the fourth, Denver used Murray, Grant, Morris, Porter, and Torrey Craig. They were minus-four in the five minute stretch with that lineup, mostly coming against Davis and James playing together.

In Game 3, Green only played 20 minutes, not appearing once in the fourth quarter, and scored four points on four shots. Caldwell-Pope played fewer than two minutes in the final period. Vogel settled on a single lineup as the Lakers trailed by double-digits: James, Davis, Rondo, Kuzma, and Caruso. That five-man unit played nearly the entire fourth quarter of Game 3.

Green hasn’t shot well for much of these playoffs, and doesn’t provide on-the-ball juice, but Caldwell-Pope has shot 43 percent from beyond the arc in the postseason. It appears that Vogel preferred the ball-handling of Caruso and Rondo over KCP’s shooting in Game 3.

If they continue to leave KCP and Green out of closing lineups, they will have no above-average three-point shooters on the court. Rondo has shot 41 percent from three in these playoffs, but that has come on low volume. He shot 32 percent in the regular season and 31 percent for his career.

A James-Davis-Rondo-Caruso-Kuzma lineup exchanges shooting for ball-handling and defense. That lineup can force turnovers, run in transition, and dribble the basketball. But their half-court offense could struggle, as they have to use clever cuts, heavy ball movement, and blunt force from the stars to get buckets. LeBron needs players around him whom he can trust to knock down wide open threes. It can be painful for the Lakers when LeBron breaks down the defense only for Caruso or Rondo to end up wide open.

Vogel will have to find a balance. The Lakers can survive without copious shooting on the floor, and Davis’s midrange success provides some spacing, but when the Lakers need a big bucket in the half court, the going can get difficult.

They run into more offensive problems when they play with two bigs. Starting Javale McGee and then benching him for the rest of the game doesn’t seem to be serving much of a purpose. Dwight Howard can do some good things, but his presence alongside AD cramps the floor for LeBron, who ends up with no lane in which to drive.

There are real defensive benefits to playing Howard, though. Having two bigs available to guard Jokic makes double-teams easier and frees Davis to disrupt elsewhere. Size, naturally, helps the Lakers get rebounds. Jokic can have too easy of a time posting up when the Lakers only play one big, even when it’s Davis. There’s also the factor of Davis’s general preference for playing the four.

Vogel hasn’t trusted Markieff Morris nearly as much in this series as he did against the small-ball Rockets. Morris played 10 minutes in Game 3 and nine in Game 2. It might be time to consider more Morris minutes. He has been red-hot from three and provides a solid body that won’t get completely bulldozed by Jokic. The biggest benefit of limiting McGee/Howard minutes is forcing Jokic to guard Davis. The Lakers need to get Jokic back in foul trouble, as they did in Game 1. Playing Morris instead of a traditional center would be a step in the right direction.

At some point in the fourth quarter, Vogel switched the Lakers to a zone defense. It was a desperation measure, with LA down by 20. A couple of Nuggets baskets might have induced Vogel to pull his stars and concede. But the Lakers all of a sudden picked up the energy and suffocated Denver, forcing a series of turnovers and climbing all the way back into the game.

I’m not sure the Lakers have stumbled upon a defensive panacea, the way Erik Spoelstra and the Heat did early on against the Celtics. But the principles that made their zone work will serve them well in the future.

Rondo and Caruso are energetic, swarming defenders on the perimeter, making it difficult for Murray to get to his spots behind the arc. LeBron, stationed in the left corner, exerts maximum influence, directing traffic and playing help defense. Davis, a Defensive Player of the Year-caliber defender, is stationed in the center. With LeBron next to him, he has the freedom to defend hand-offs near the arc and contest shots.

The most important part of this versatile zone is the coverage it provides around the free throw line. One of the guards at the top can hound Murray while the other stands ready to double-team or switch onto Jokic. LeBron and AD are athletic enough to cover both the rim and the three-point line: 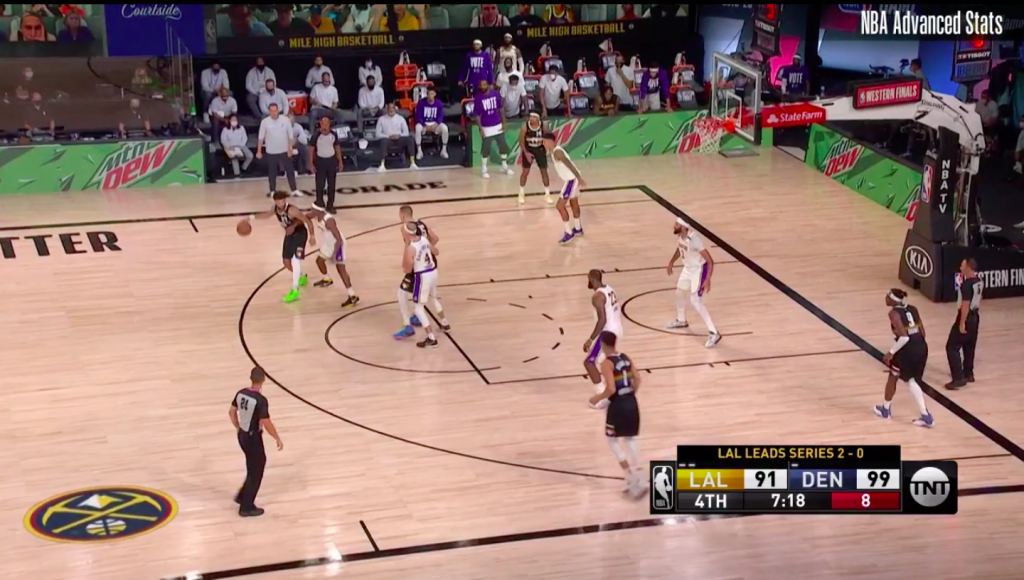 Caruso can battle Jokic without worry because LeBron and AD are right behind him, prepared to switch and disrupt if Jokic were to get the ball. With a harder path to Jokic and two guards able to track Murray, the Lakers cut off the Nuggets’ most fruitful source of offense. The screenshot above ended in a Rondo steal:

Here’s another Rondo steal, with the Lakers’ defense seeing the same benefits in this zone:

LeBron makes it look like a 3-2 zone sometimes as he drifts up toward the elbow. He takes away Murray’s driving lane in the above clip, forcing him to turn predictably into Rondo’s quick hands.

The Lakers occasionally played zone variations in the regular season. Most often, they used a hybrid system that alternated between zone and man, with LeBron diagnosing the offensive play and calling out directions in response. The defense they played in the fourth quarter of Game 3 was more clearly based in zone principles, but it still looked loose and adjustable based on what the Nuggets did.

It’s certainly plausible that Vogel will deploy the zone again in Game 4, particularly with a lineup like this. (Kuzma’s physical, active presence in the corner opposite LeBron is also important.) They should at least take principles: willing help defense and double-teaming based in the athleticism of James and Davis.

The Nuggets could be a team well-equipped to combat a pure zone, given time to prepare. They play with shooting, and Murray can pull up from anywhere. Finding soft spots in the zone, as the Celtics did against the Heat, is easier when you know Jokic is a smart enough passer to find the holes.

There will be more strategic puzzles. This is a star-driven series, so it comes down to which superstar makes big plays and which team sees its role players step up. Whatever happens in Game 4, the Lakers will know that they can’t count out the Nuggets.