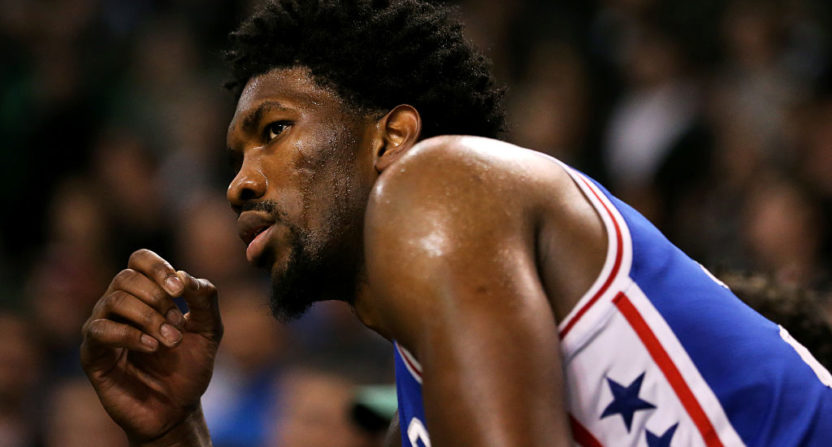 The most tantalizingly talented player in the NBA has also just signed the most fascinating contract the league has seen in years, perhaps ever.

The Philadelphia 76ers re-signed 23-year-old phenom center Joel Embiid to a five-year, designated rookie scale maximum contract worth $148 million, and possibly $178 million as a super-max player if he reaches certain milestones, like making the All-NBA team or winning MVP this season.

Embiid has played only 31 games in his NBA career despite being the third pick of the 2014 NBA Draft, missing two full seasons with knee, foot, and other injuries. It doesn’t take a genius to figure out that giving nearly $150 million to someone with less than half a season under his belt is an enormous, gigantic risk. It also didn’t take a genius to see how unstoppable Embiid was when he actually took the floor.

Embiid is seven feet tall and scored over 20 points per game last season. That part right there is already worth $80-90 million in today’s NBA. He also grabbed nearly eight rebounds in 25.4 minutes per contest, averaged 2.5 blocks, and shot 36.7 percent from three, stretching defenses with his range, driving to the hole at will, and getting to the line, averaging nearly eight free throw attempts per game last season.

Nobody has ever seen Embiid’s combination of size, speed, athleticism and 3-point shooting for someone at the center position. He’s a revolutionary, generational talent, both on the court and on Twitter and Instagram.

Philadelphia reportedly wouldn’t be on the hook for Embiid’s entire contract if he misses significant time due to injury, which sadly seems more likely than not at this point due to his history and the fact that Embiid isn’t even 100 percent right now. It’s almost certain that Embiid’s contract will be heavily insured and that there will be injury clauses so that the Sixers won’t be totally liable to pay everything if he remains as injury prone as he’s been since his collegiate career at Kansas. But ESPN’s Adrian Wojnarowski, who first broke the contract extension, said that Embiid is going to get all of the $148 million unless he gets waived, which seems next to impossible right now.

And despite the huge gamble the Sixers are taking by paying someone who’s played in 31 of a possible 246 regular games since he was drafted, Philly couldn’t afford to not sign Embiid to a new contract. Embiid would’ve been a restricted free agent after this coming season, allowing him to explore the market and envision a future on other teams. The Sixers would’ve definitely matched any offer sheet given to Embiid, but why even risk it getting to that point with him?

“Joel Embiid is a transformative young talent that you rarely come across in our game,” said Sixers president Bryan Colangelo in the press release announcing the deal. “Joel is only scratching the surface, but he has all the potential and promise to go down as one of the all-time greats to wear a Sixers jersey. Ownership’s willingness to extend this contract reflects our collective belief in Joel Embiid and a reinforced commitment to building a championship-level basketball program.”

Can you imagine how unguardable and how incredible Embiid can be if he can put an entire healthy season— or two, or three— together?

The 76ers franchise has told its fans to Trust The Process for several years now as it’s gone through one losing season after another. The team’s gone through a tough and trying rebuild, drafting players like Embiid, Ben Simmons, Markelle Fultz, Dario Saric and Jahlil Okafor to forge a foundational core that could keep the Sixers relevant and contending for many years. To risk letting a potential all-world player like Embiid leave would be managerial malpractice.

Yet the undeniable risk remains, lingering like the Sword of Damocles over this team. What if Joel Embiid is never healthy? What if he’s always hurt, always rehabbing and on the mend, desperately working for a clean bill of health that may never be reached?

Joel Embiid could turn into the biggest tease the NBA has seen this century. Such a talented player with such a youthful love, exuberance and enthusiasm for the game, betrayed by his body that is both a blessing and a curse; giving him the ability to be such a transcendent player but at the same time, limiting his time on the court where he can display his prodigious skill-set.

That’s the risk Philadelphia is taking, betting on Embiid’s health and his ability to be not only the best center in the NBA, but one of the best centers in decades.

That skill-set he’s shown, that glimpse of greatness over 31 games, is what makes the reward of the Joel Embiid contract extension greater than the enormous risk the 76ers are undertaking by re-signing him.

In a weak Eastern Conference, Philadelphia has a chance to make the postseason for the first time since this rebuild began four years ago. J.J. Redick and Amir Johnson were signed as free agents over the summer, moves signaling that The Process has reached a new phase. None of that matters if Embiid doesn’t play at least 50 games this season, because he’s so integral to this team’s success.

There’s a pretty good chance Embiid only plays half of the Sixers’ games this season, the last before this monstrous extension kicks in. For the 2018-2019 season, Embiid will make $25.3 million, and his fully guaranteed salary will only spike from there, whether Embiid plays or not.

In this salary cap era with limitations on years and max salaries, this is the riskiest contract we’ve seen. And yet Philadelphia’s huge bet on Joel Embiid, for the position the Sixers are in as a franchise, was one they couldn’t afford not to take.