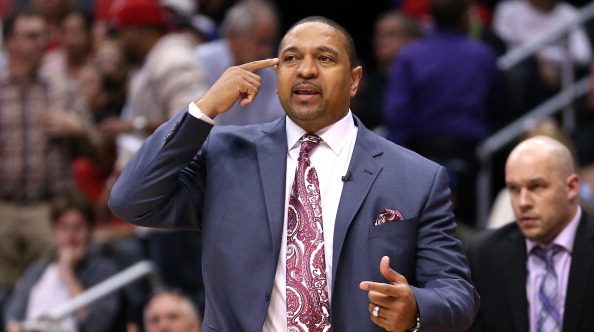 Brian Scalabrine is probably the People’s Hero of the NBA. He played with such determination and a joy even though he wasn’t nearly as talented as some of those he shared the floor with. He’ll also talk basketball tactics with you until the world ends. And he’s a ginger, even better. But after he was fired from his coaching job with the Warriors at the end of the 2013-14 season.

Scalabrine told Adrian Wojnarowski about why he was fired, and it doesn’t put his former boss Mark Jackson in a good light. The snowball started rolling down the hill after a 21 point loss to the Spurs who were without Tim Duncan and Manu Ginobili (doesn’t that sound interesting enough). Scalabrine was scouting the Spurs for the game, and he wanted to watch some tape on a broken play. After the game, Jackson held a meeting. According to Scalabrine, this is how it went down.

Quotes via Inside the Warriors…

“Afterwards, it’s a big thing. Like we’re having a meeting afterwards, and we’re going to clear the air here (with Mark Jackson). He’s the leader, so we had this meeting of clearing the air, and the meeting was, it was like a bombardment of he’s trying to like get everyone to say that I’m a bad guy, and I’m a bad coach, and I should be off the staff. I’m not sure what the point of it is, but just imagine an emotional loss after the Spurs, and he goes to every coach and says, ‘Should Scalabrine be here? Is he a bad guy? Is he disrespectful?’ Or whatever he said. And what is an (assistant) coach going to do? You’re like some low-level coach, and Mark is your boss, and is Scalabrine disrespectful? Of course you’re going to say ‘yes.’ So every person was like ‘yeah.’ So then he brought in management and did the same thing. So we have a meeting where it’s me versus coaches and management. We’re talking about Bob (Myers) and the assistant GM and the owner’s son (Kirk Lacob). And my whole thing was like, ‘I think there’s a time and place for this, right? Can’t we do this in a different time?’”

So Scalabrine was handed his pink slip, but the story doesn’t end there.

“Clearly you could see there was a lot of dysfunction, whatever. But his exit meeting comes into basically Mark saying like, ‘I’ve got to let you go.’ And me on the same time basically saying, ‘You know there’s only 11 games left (before the playoffs).’ Like not only am I worried about my reputation, and I’m not really worried about his reputation. I’m just kind of informing him like you don’t come out squeaky clean on something like this. You don’t just along the way just like dismiss one of your assistant coaches and think that nothing is going to happen. Like, there’s still going to be some fallout from this. Then we started getting into the talk of team and how I thought that they were really good, and he thought that they were not good as they really are. And at the end of the day, I got fired, and I went to the D League, and it was an adventure.”

Mark Jackson’s reputation as a coach and a talent evaluator already was in the tank, and this story doesn’t help matters. It seems like the Suns and Nets aren’t going to be viewing Jackson’s LinkedIn page any time soon.

You can listen to the rest of Wojnarowski’s interview with Scalabrine here.

Quotes via Inside the Warriors