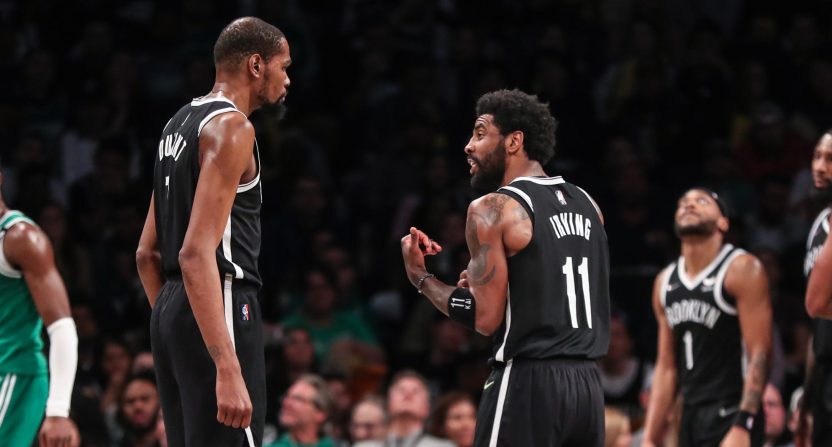 The Brooklyn Nets have been on one heck of a rollercoaster this offseason, and it looks like there will finally be some sort of resolution after a number of reports on Thursday.

It was first rumored that star point guard Kyrie Irving would potentially be sign-and-traded and that the team had given him permission to seek that option. Then Irving opted in to his player option, which led many to believe he’d stay with the Nets for at least one more season.

Things then went sideways Thursday when it was reported that star forward Kevin Durant has requested a trade from the Nets, and the team will look for a potentially historic haul in return for the 12-time All-Star.

It appears that the Durant news could possibly affect Irving as well. ESPN insider Brian Windhorst discussed the matter on This Just In on ESPN and said he believes Irving will also be traded in wake of Kevin Durant’s trade request.

“I believe this also means that Kyrie Irving will potentially be on the trade market,” said Windhorst on Thursday. “I believe that they will probably trade both of them. The Nets didn’t want status quo, and they aren’t going to have status quo. I think we are going to see a pretty significant shift in power balance.”

While there has been a lot of drama surrounding the franchise this past year, losing both Durant and Irving this offseason was not the outcome many would have expected.

Even after Irving opted into his player option earlier this week, neither he nor Durant had any contact with the Nets organization, which should have been an extremely telling statement of things to come.

Kevin Durant and Kyrie Irving had no contact with the franchise after Irving opted into his deal on Monday, and a sense of inevitability existed that Durant would eventually ask for a trade, sources tell ESPN. It happened today.

It should be very interesting later on Thursday as NBA free agency officially gets underway, but we certainly already have some fireworks brewing with this news regarding both Durant and Irving.