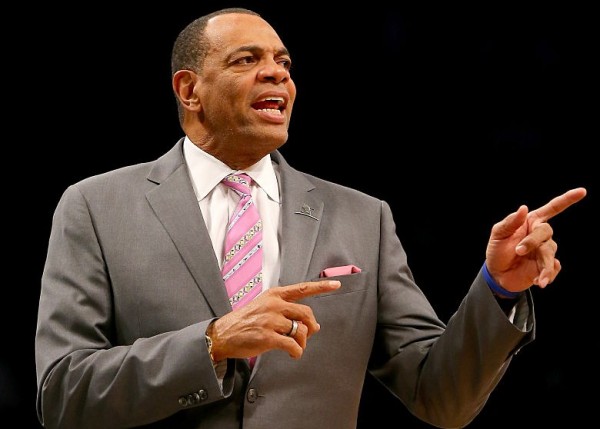 A day after losing to the Detroit Pistons and dropping to 10-27, the Brooklyn Nets have fired head coach Lionel Hollins and reassigned general manager Billy King. Nets assistant coach Tom Brown will take over as interim head coach.

“After careful consideration, I’ve concluded that it’s time for a fresh start and a new vision for the direction of the team,” said Nets owner Mikhail Prokhorov said in a statement released by the team on Sunday morning. “By making this decision now, it enables our organization to use the rest of the season to diligently evaluate candidates with proven track records. It’s clear from our current state of affairs that we need new leadership.

The Nets are currently sitting closer to the willingly-tanking Philadelphia 76ers than the eighth spot in the NBA’s Eastern Conference playoff picture. So yes, when that is the reality of the situation approaching the midway point of the season, it is most definitely time to re-evaluate the direction of the franchise. Hollins was hired by the Nets before the 2014-2015 season after seven seasons with the Memphis Grizzlies (including the organization’s final year in Vancouver). Hollins was signed to a four-year deal upon his hiring, meaning that he didn’t even serve out half of his contract

When the Nets moved from New Jersey to Brooklyn, they brought with them a renewed sense of energy, pride, and expectations. The Nets delivered in year one, going 49-33 and making the playoffs as the fourth seed. Since then, the Nets have been unable to keep steady. Jason Kidd coached the Nets to a 44-38 record in the 2013-2014 season during his one year as a head coach in Brooklyn, advancing them to the Eastern Conference Semifinals for the first time in nearly a decade. Kidd then jumped ship and joined the Milwaukee Bucks, Hollins was hired and went just 38-44 in his first season with the Nets, and the downward trend shows no sign of turning around this season.

Of course, changing the head coach is just one part of the deal in Brooklyn. The Nets reassigning King from his role as general manager speaks even louder in terms of looking for a refresh in the organization. King was named the GM of the Nets in July 2010, which has been followed by three losing seasons out of five, and another likely on the way this season. King made some decent moves early on for the Nets to help build a winning team, but the long-term stability has failed to be organized under his leadership.

“With the right basketball management and coach in place, we are going to create a winning culture and identity and give Brooklyn a team that it can be proud of and enjoy watching,” Prokhorov said in his statement. “We have learned a great deal during the past six years and our experiences will guide us for the future. Following the consolidation of team ownership last month, I can assure you that I’m more determined and committed than ever to build a winner.”