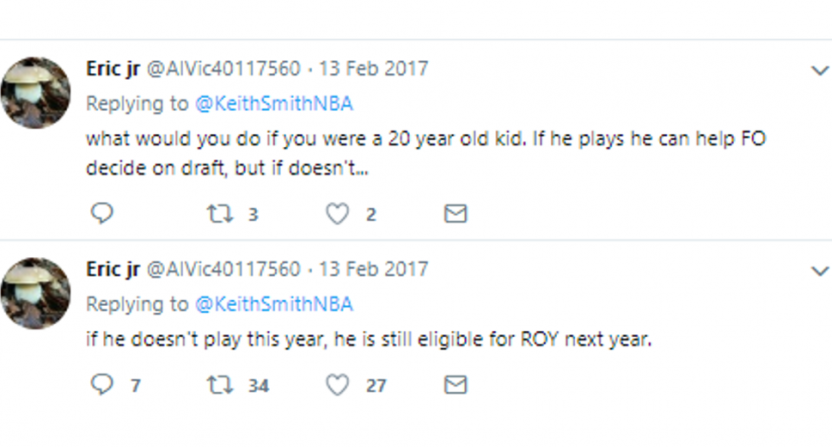 Monday’s NBA Awards have had a lot going on, but one of the most-discussed developments comes from the Philadelphia 76ers’ Ben Simmons winning Rookie of the Year. Simmons was drafted in 2016, but didn’t play at all that year after fracturing a bone in his foot in a September practice and being ruled out for the rest of the season in February. Simmons had an excellent 2017-18 campaign, averaging 15.8 points, 8.2 assists and 8.1 rebounds per game, and was named Rookie of the Year as a result, but there was some controversy there, and incredibly, some of it comes from one of the burner Twitter accounts linked to former 76ers GM Bryan Colangelo.

Some of the critics of Simmons’ selection have made a case for “true rookie” Donovan Mitchell of the Utah Jazz over him (and Mitchell added to that conversation himself earlier this year, wearing a hoodie with the dictionary definition of rookie).  Some have gone further, arguing that Simmons actually could have played last year, and some have even suggested that the 76ers held him out (or that he held himself out) partly to keep his RoY chances alive. And there’s some hilarious support for that theory from one of the burner accounts tied to Colangelo, which, amazingly, has not yet been locked or deleted. Back in February 2017, while Simmons was being evaluated and many were wondering if he would enter the lineup, here’s what the burner account tweeted at a comment from RealGM’s Keith Smith that Simmons not playing yet wasn’t about the CBA:

if he doesn't play this year, he is still eligible for ROY next year.

what would you do if you were a 20 year old kid. If he plays he can help FO decide on draft, but if doesn't…

This tweet hasn’t received as much attention as many of the others “Eric jr” sent around that time, as that was the height of the account’s criticisms of Joel Embiid and suggestions that Jahlil Okafor had (then-undisclosed) knee problems. Both of those are bigger issues in retrospect. And there was no reason for anyone to pay attention to this tweet from a random user with a few followers back then. But in light of those accounts being linked to Colangelo (or, as he claimed, his wife, without his knowledge), that’s a whole lot more interesting.

Of course, that tweet is far from proof that the Sixers’ organization or Simmons himself held him out to preserve RoY eligibility, especially if it was truly the telephone tag of Colangelo’s wife relaying something she heard from him and especially considering that a medical exam after this led to Simmons being shut down for the year. And even if this was all some grand conspiracy, that wouldn’t affect Simmons’ eligibility under the NBA’s current rules, and it wouldn’t change the RoY outcome. But it’s absolutely hilarious that a Colangelo-linked burner suggested this way back when.

[Thanks to Mark Ennis for pointing out the link]