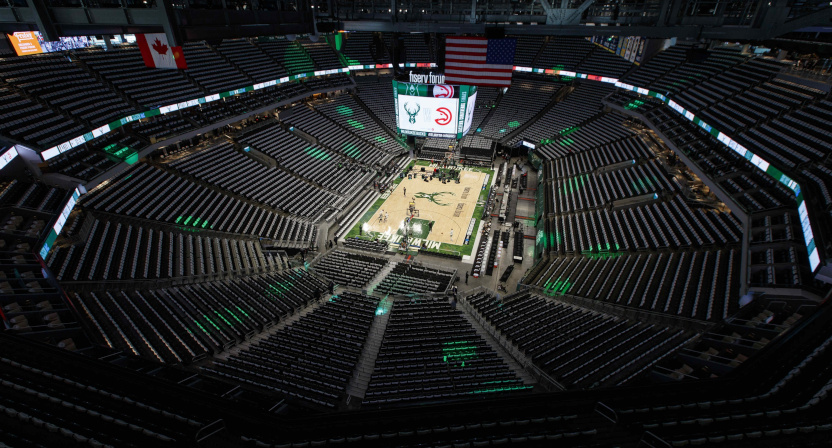 There have been plenty of stories nationally in recent months about labor shortages, especially in the restaurant and hospitality industries, with many businesses claiming “no one wants to work” and many critics claiming businesses aren’t offering enough compensation for those jobs. This has now impacted sports in an interesting way, with the Milwaukee Bucks putting out a call earlier this week for non-profit employees to volunteer at their concessions at FiServ Forum during playoff games (including Wednesday’s Game 1 of the Eastern Conference Finals against the Atlanta Hawks; a pre-game shot is seen above). That drew more attention Wednesday when it was critically quote-tweeted by Dan Price:

The Milwaukee Bucks, owned by billionaires, are worth $1.63 billion. It brings in $240 million a year in revenue.

The Bucks' arena is looking for volunteers to sell concessions during playoff games at a pay rate of $0/hourhttps://t.co/f2TePq5J7A

Price is the CEO of online credit-card processing company Gravity Payments, and he’s notable for cutting his own pay to $70,000 a year in 2015 while raising all other employees’ pay to at least that level over three years. He’s written a book about that and done plenty of media appearances about it, and all of that (and his history of using Twitter to criticize CEO compensation and poor entry-level pay) is important context here.

It’s also worth noting that while Price’s “at a pay rate of $0 an hour” remark is correct, this program (as per the linked CBS 58 story) has officials saying “a percentage of sales at the specifically-worked concessions stands will be donated to the not-for-profit.” So while the compensation for the individual workers is in fact $0, this does come with some money for their organizations. That percentage has not been revealed, though, and whether this has much value for those organizations obviously depends on how significant that percentage is. And that doesn’t take away from the strangeness of this decision; it’s certainly not common to see a professional sports team asking for volunteers to man the concessions, even with a percentage going to their organizations.

Why is the team going this route? Well, there are some quotes on that from Bucks’ VP Michael Belot in a Milwaukee Journal-Sentinel article from Ricardo Torres, published Monday. That article also includes that they did this during the previous series against the Brooklyn Nets. Here’s more from that:

The Milwaukee Bucks are asking for the help staffing the stands in exchange for a percentage of the sales. The labor shortage has affected the service industry particularly hard.

Michael Belot, senior vice president of Bucks ventures and development, said the organization made a similar call during the series against the Brooklyn Nets.

“We’re just in need of staff and in need of good, hardworking people,” Belot said. “And a great way to do that is to engage not-for-profits and give back to a good cause and also get the labor that we need to operate at a high level.”

Belot said the Bucks and food concessionaire Levy have been hiring workers throughout the playoffs.

“Staffing has been a challenge across the hospitality industry as a whole,” Belot said. “We’re trying to do whatever we can to get the appropriate number so we can deliver a high experience or quality experience.”

Of course, staffing would be less of a challenge if employers offered higher wages for those positions. There are challenges beyond that, including the more than 600,000 COVID-19 deaths in the U.S. (with that disease hitting service-industry workers particularly hard), but the wages being offered for these jobs are a big part of why they’re not being filled. And it is interesting that the Bucks and Levy have chosen a more convoluted response than just “Let’s raise the wages we’re hiring at.”

Now, in this case, that may be complicated by contracts. It seems likely that it’s Levy paying the employees rather than the Bucks, and it seems probable that Levy’s own contract with the Bucks is at a certain rate. If that’s a multi-year deal, there would be challenges in boosting what they’re paying their employees without gaining any more revenue. And once pay gets raised, it’s very difficult to lower it again or hire new people at a lower wage, which is why many businesses seem to be betting on waiting and hoping people will take jobs at the old rates eventually (and lobbying legislatures to reduce or end unemployment benefits to try and push people back into work) rather than just raising their wages. And this approach from Levy and the Bucks certainly seems to be betting on that, and betting on filling the gap with these volunteers in the meantime.

The Levy-Bucks situation is an interesting specific case of the wider economic issue, as a sports team during a playoff run can’t just say “Sorry, our concessions are closed because people don’t want to work (for what we’re willing to pay).” The team needs to have those concessions staffed in order to keep their fans happy. Now, that doesn’t mean they had to go this route; the Bucks absolutely could have put pressure on Levy to raise their wages to attract more people, and/or offered to adjust their contract with Levy to make those higher wages possible for that company. Instead, they chose this approach of outsourcing this work to non-profit employees.

There are some pro and cons to that approach for the Bucks. If enough people take them up on this offer, then their concessions are staffed, and if those people do a decent enough job (it should be noted that food service work is not as easy as many people assume), then they avoid setting a precedent of paying more for concession work. Maybe that saves them and/or Levy some money down the line.

But there are a whole lot of potential downsides to this decision, including that makes the team now the face of this issue, and subject to the criticism this approach is getting. Notice that Price and other critics are referencing the Bucks’ value, not Levy’s. If the team hadn’t stepped in, this would have been seen as one facet of an ongoing wide service industry issue, one involving a concession company most sports fans don’t particularly know. Now the Bucks are taking a clear stance on this issue, and their stance is that they would rather have volunteers running the concessions than pay enough to attract more people to those jobs. And that’s definitely going to lead to further backlash.