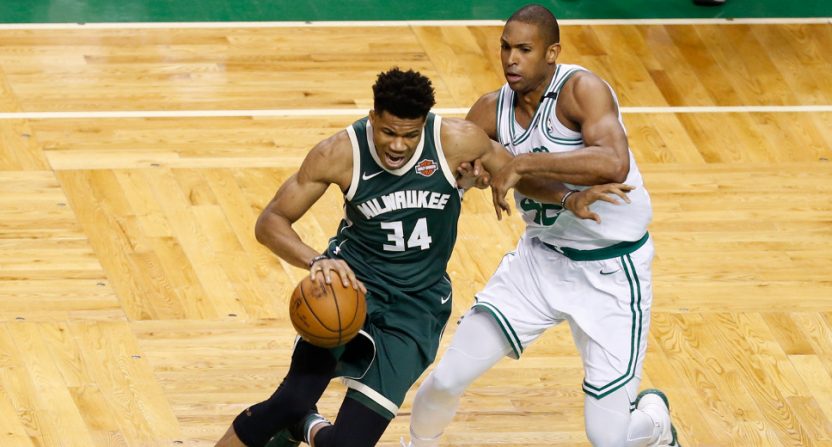 This NBA season saw one lengthy streak of disappointments end, with the Minnesota Timberwolves making the playoffs for the first time since 2004 and extinguishing a league-high 13-season postseason drought in the process. However, an even longer streak will continue, as the Milwaukee Bucks’ 112-96 loss to the Boston Celtics in a road Game Seven Saturday means that they still haven’t won a playoff series since 2001:

That 2000-01 Bucks team was coached by George Karl and featured Ray Allen, Sam Cassell, Glenn Robinson, and even Ervin “Not Magic” (as detailed on his Wikipedia page!) Johnson. They finished with a 52-30 record, good enough for second in the East, and the franchise’s best since the 1985-86 season, plus a significant improvement over the previous year’s 42-40 (which saw them sneak into the playoffs in eighth place but lose the best-of-five first-round series 3-2). And they went on quite the postseason run, beating the Orlando Magic 3-1 and then edging the Charlotte Hornets 4-3 before falling in seven games to Allen Iverson and the Philadelphia 76ers (who would lose the Finals to the Lakers). Since then, though, things have been much worse for the Bucks.

What’s remarkable about the Bucks’ streak is that it hasn’t been just about being real bad and missing the playoffs. As noted in the above tweet, they’ve managed to make the playoffs eight times since that 2000-01 season, but have lost in the first round each time. And that’s not all that surprising, as they’ve been the sixth, seventh or eighth seed in each of those appearances (four, two and two times respectively). This marked only the second time they’ve even managed to take a series to seven games (the other one came in 2010-11 against Atlanta), so there’s at least some progress there. But there are still concerning signs for Milwaukee, especially as their best players were great and that still wasn’t enough:

When is the last time that a team had the two best players in a series (Giannis and Middleton), those guys played at or above their normal level, and that team still lost?

Not sure I can remember something similar to this Milwaukee series.

Game Seven was further proof of that, with Giannis Antetokounmpo posting 22 points (albeit on only 7 of 17 shooting) and nine rebounds and Khris Middleton adding 32 points on 61.1 percent shooting. This Milwaukee team clearly has some potential, especially when it comes to those two players, but there’s also a lot of roster work that needs to go on beyond them for the Bucks to end this drought. And this loss to a Celtics team without the likes of Kyrie Irving and Gordon Hayward is further proof of that.