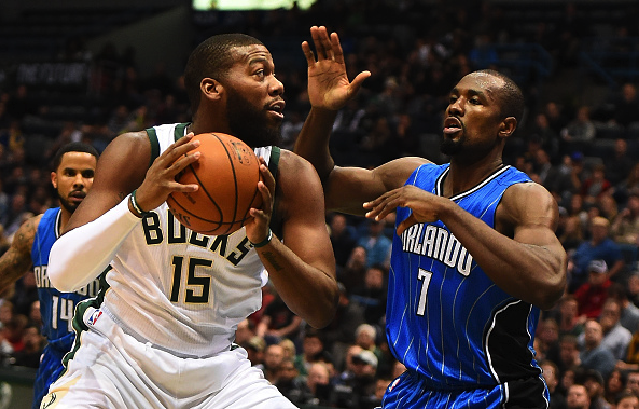 Just 17 months after signing a three-year, $50 million contract with the Milwaukee Bucks, center Greg Monroe is now the Eastern Conference’s highest-paid player who hasn’t started a single game this season.

Averaging just 18.6 minutes per contest as we hit the quarter-pole of the NBA regular season, Monroe told The Comeback how he’s been handling his new role and how his professionalism is earning high marks from his teammates and superiors.

Before the first of two wins in three days last week against the five-win Brooklyn Nets, Monroe sat at his locker in Brooklyn’s Barclays Center and admitted that this season has definitely been frustrating for him.

“I think anybody would want to play,” he told The Comeback, but he’s trying to prepare like he can be called into action at any time.

“Preparation is always the main thing for me,” Monroe added. “Continue to fine-tune my game.”

Greg Monroe has played so little this season he almost didn’t catch this pass for the fastbreak dunk pic.twitter.com/uO9AgctVrX

“We have three centers that we’re trying to play, to keep happy,” Kidd told The Comeback, referring to Monroe, John Henson and Miles Plumlee. “So someone’s going to have to sit.”

After a period of four games in six days in mid-November, where Monroe played a total of 17:53 and the Bucks went 1-3, his playing time has become more consistent, which head coach Jason Kidd said is key for him.

Kidd said he was encouraged by Monroe’s improved play, and that’s only continued. He scored 10 points and grabbed 13 rebounds in a one-point loss to San Antonio on Monday, his first double-double since Nov. 5. On Saturday, he pitched in with 13 points, seven boards and four steals in a win over Brooklyn.

“I always prepare the same way. I don’t change anything, whether I play or not,” Monroe said. “If my number is called, I’ll be ready.”

“It’s a new role for him, but I think he’s handled it well,” Henson told The Comeback.

That ability to be ready at any time has served the Bucks well. His 97 defensive rating leads the team, according to Basketball-Reference, and Milwaukee is outscoring its opponents by 7.2 points per 100 possessions while he’s on the floor, per NBA.com.

“We need him to continue to keep playing that way,” Kidd said.

So whatever Kidd is doing with Monroe for this 10-9 Milwaukee club, so far it seems to be working. And management has taken notice.

“We’re pleased with him. We’re pleased with the job he’s doing for us,” Bucks general manager John Hammond told The Comeback. “You have these players that you put in the category of a no-maintenance type person, and that’s what he is. He just comes to work, with a very workman-like approach about his job. And we couldn’t ask any more than that. He’s doing everything he can do to help us win games.”

Henson and Plumlee have split the starting center duties this year, and both said that the key to staying sharp and ready despite inconsistent minutes is sticking to your routine.

“Your number’s going to get called again, so if you’re not ready for the opportunity, it could actually backfire on you,” Henson said. “So it’s hard sometimes, but your job is to be locked in and help the team.”

If your confidence is down, Henson suggested watching film or even YouTube clips of your top performances, to remind yourself that you still have the abilities that got you in the league in the first place.

“If you haven’t played in three days, you’ll play in a couple of days,” Henson said. “Your skills haven’t gone anywhere.”

“Don’t worry about too many things,” Plumlee said, despite not knowing what to expect each night with varying playing time, “just focus on your energy and working hard.”

Monroe said he’s working to expand his game beyond being a scorer, rebounder and defender. He’s working on his free throw shooting — which is a career-best 88.6 percent, albeit in just 44 attempts — and his shooting overall. And in an NBA landscape where even giants Marc Gasol and Brook Lopez are hoisting up threes at preposterous rates, perhaps scoring from distance is Monroe’s path to returning to a much larger role.

“It’s an ongoing cycle,” Monroe said. “I always try to find ways to push myself and continue to do the things I do well, while also trying to expand my game.”

You see it every year in the NBA: A veteran who finds himself playing a lesser role on his team who decides to mentally check out, go through the motions, or some other played-out cliche. To his credit, Monroe hasn’t done that and has slowly been given more playing time over the last several games.

“He is a guy that keeps a very professional approach to how he does his job,” Hammond said. “Look, this is not just words, it’s the truth. He the first guy to come to work every day, first guy on the court, and stays late to do his job.”

Monroe was asked if he would take back his decision to come to the Bucks, knowing that he’d be in this unfamiliar role as a backup center. He paused for a few seconds, before a measured response.

Monroe may not be in the optimal situation right now, but he’s definitely making the right decision now to maintain a positive attitude while keeping the Bucks firmly in the race for the playoffs.