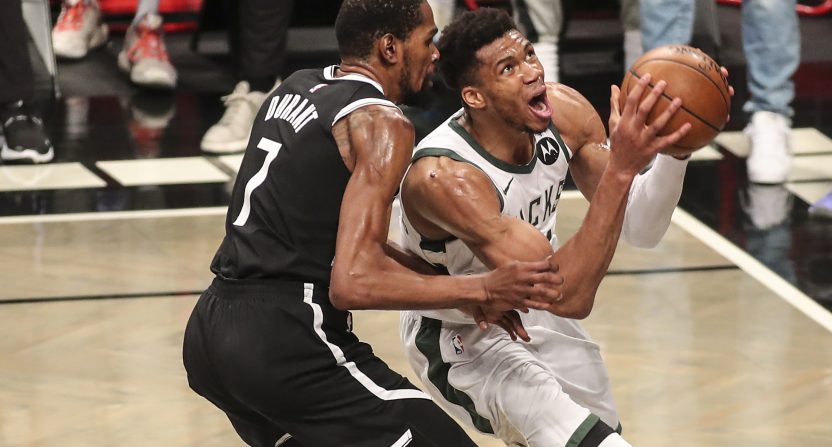 Milwaukee Bucks fans had a huge, “Oh no, here we go again” moment when Kevin Durant nailed a ridiculous shot on Saturday night to tie Game 7 and force overtime.

But Milwaukee was able to outscore the Nets 6-2 in the extra period to come away with a 115-111 victory, and the first road Game 7 win in franchise history. Khris Middleton hit a smooth fadeaway jumper for the go-ahead bucket with 40.1 seconds remaining in overtime.

A gassed Durant — he scored 48 points in 53 minutes — tried a similar shot to his end-of-regulation beauty, but came up short.

KD couldn't get this final shot to go. pic.twitter.com/5zBXuxRMXQ

Giannis Antetokounmpo played like the two-time MVP he is, scoring 40 points (15-of-24 from the field), pulling down 13 rebounds, and dishing out five assists over 50 minutes.

The Bucks have experienced plenty of postseason disappointment, but they erased a 2-0 deficit in this series and overcame adversity to get it done in the crazy Game 7.

After the Bucks win in game 7 over the Nets, there are now three instances of a team coming back from a 2-0 deficit this postseason, the most such instances in a single postseason in NBA history

The Bucks had been 0-15 in best-of-7 series where they fell behind 2-0. pic.twitter.com/ysh7ttZqnw

The Nets were the heavy NBA title favorites after Game 2, but injuries to Kyrie Irving and James Harden (who played the last two games, but was largely ineffective) but made them much more vulnerable, and the Bucks took advantage. Now, the NBA title is completely up for grabs.

The Bucks will face the winner of Sunday night’s game between the Atlanta Hawks and Philadelphia 76ers in the Eastern Conference Finals.

Related: Pressure remains on Mike Budenholzer to get the Milwaukee Bucks to the NBA Finals